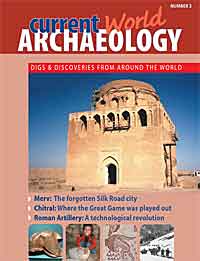 Omar Khayyam, the great Persian mathematician and poet who penned the immortal Rubaiyat, spent the latter part of his life at Merv, in central Asia, now part of Turkmenistan, and the subject of our leading article in this latest issue of Current World Archaeology. Merv is a magical city for archaeologists, for there are in fact, three cities, which instead of being one on top of the other, were placed side by side. Recently a team from the British Museum and London University have been excavating at the oldest city: what was it like, in the furthest outpost of the Sassanian empire?

Chitral, today in North West Pakistan, was once one of the princely realms in the days in the 19th century, when the 'Great Game' was played out for control of what is now Afghanistan. Brigadier Bill Woodburn has been fascinated by Chitral, and here he describes his researches into the siege of 1896 and the efforts that are being made to preserve the old palace.

Immediately after the last issue of Current Archaeology was completed, the two senior editors took the opportunity to fly to Jordan where we hired a car and drove around the country, chasing up articles for future issues. Here we give a brief foretaste of the articles we have in target, and describe some of the other sites that we visited, notably the reconstructions at the neolithic village of Beidha, the new archaeological park at Madaba, and the stunning Roman city of Jerash - and how we saw, but failed to reach the best preserved Roman fort in the world, at Qsar Bshir.

Around 100 AD, a major Roman technological advance took place in the manufacture of catapults. A new design was introduced which increased their penetrating power by at least 50%. Michael Lewis whose work on Early Wooden Railways was reviewed in CA 23 and whose book on Roman Temples was reviewed in CA 2, has been tracking down this hitherto unrecognized revolution. Here Neil Faulkner describes how both the old and new catapults worked.

On 26th December 2003 an earthquake destroyed much of the mud brick city of Bam. Here the professor of Seismology at Teheran describes the damage, and with the help of two distinguished recent visitors, we look at the city that has been destroyed.

In the shorter reports Vince Gaffney describes how he has made the find of a lifetime: the Cetina river valley in Croatia where the river has preserved a cornucopia of finds from the Neolithic to the Middle Ages; Richard Hodges describes his latest travels in Italy, Greece and Albania; and Neil Faulkner tells how he spent a week as Vercingetorix.

The archaeology of a Roman technological revolution: the cheiroballistra…

A royal fort in the Hindu Kush, and its seige in 1895: Bill Woodburn and Neil Faulkner report…

Exclusive report on the effects of the devestating 26.12.2003 earthquake on the historical remains of Bam, Iran…

Oldest buildings of their type discovered on island of Marawah…

A note for budding archaeologists! The Schools Committee of the Roman Society and the Roman Research Trust have teamed up to offer…

A major new museum has been planned for Giza, Egypt…

Exciting finds fromsite on the river Cetina in Croatia…