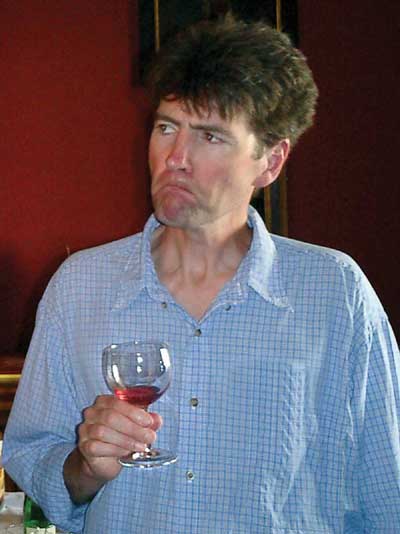 It was mid-November, bitterly cold, and we were on the road for ten days in central France making a documentary ‘road movie’ for TV about Caesar’s Gallic War. The idea was to reconstruct the clash between Caesar’s legions and the Gallic resistance led by Vercingetorix in 52 BC. Six years into his conquest of Gaul, Caesar faced what was probably the greatest military challenge of his career: a vast tribal revolt which, for the first time in the war, united virtually the whole of Gaul against the invader. More than once, Caesar was within an inch of destruction. The climactic battle at Alesia lasted four days and was fought with primal ferocity. Yet the story – more dramatic than anything in the history of Britannia – has rarely been told in Britain.

There were six of us, two producer/directors, a cameraman, a soundman, and two of us to do the talking. Mark Corby, an ex-Guards officer and military historian, was Caesar. I, a Current Archaeology editor, was Vercingetorix. I did not have to dress up in gold torc and droopy moustache – in fact, we drove around in sports cars! – but the idea was to get inside Vercingetorix’s head and articulate his thoughts. Now that’s an interesting challenge for an archaeologist. You immediately become aware of the immense gap between earthworks and thought-worlds, between bits of broken pot and rusted metal and the reasoning in a human brain that died 2000 years ago.

The campaign was fought in central France, and many of the sites are spectacular hill-fortresses. The Gauls were well ahead of the Britons in developing proto-states, and in the century before the Roman conquest the landscape filled up with oppida. These were large hilltop enclosures encircled by walls of murus gallicus – a combination of timber framework and stone infill that Caesar reported was effective against both fire and the battering-ram. Inside some oppida there was quite a build-up of occupation, including some monumental architecture, and these sites are really embryonic towns. A major, multinational excavation project is under way at one of them, Bibracte, the capital of the Aedui tribe.

The rain was belting down when we visited the site, but the main excavation was under a corrugated iron roof, and Vincent Guichard, the French archaeologist in charge, was able to show me a stone-built basilica of Roman type that almost certainly predates the conquest – an indication of how Romanised some of the Gallic tribes had become. Caesar records a great meeting at Bibracte when the Aedui joined the revolt and Vercingetorix was reaffirmed as its leader. Was a classical colonnade the backdrop when the Gallic chieftains swore undying hatred of Rome?

It always amazes me how people can argue that the Roman Empire was a ‘Good Thing’ because it gave us bath-houses and central heating. Who would argue that increases in steel output justified Stalin’s labour-camps, or autobahns Hitler’s final solution? Yet somehow amphitheatres, crucifixions and massacres are alright in antiquity if in the end you get nice mosaics. What recent work on the French sites is showing is that these two things are separate: you can have urbanism and classical art without being conquered. Our visit to another oppidum really brought home what it meant to be attacked by the Roman army.

Avaricum became medieval Bourges, and the city remains a delightful place to explore. I almost cried at the beauty of the medieval stained-glass windows illuminating the soaring Gothic architecture in the east end of the cathedral. But in 52 BC the place was the scene of massacre and mayhem when the legions broke into the Gallic oppidum and went berserk, massacring 40,000 people.

The outcome was different at Gergovia, a breathtaking natural fortress. I will never forget filming on the summit. Until that moment I hadn’t known ‘an icy wind’. I was shaking violently in just my woolly and Barbour, and before filming had to put on a second shirt, a waistcoat and the cameraman’s spare anorak – six layers in total, so I look like the Michelin man in the Gergovia footage.
This was the site of Vercingetorix’s great victory, where an attempted surprise attack by Caesar went badly wrong and he lost 700 legionaries and 46 centurions. He was forced to retreat and the damage to his prestige helped spread the revolt. He was soon struggling to extricate his army.

Our last stop was Alesia, where Caesar turned the tables. Alesia, like Gergovia, is a forbidding natural fortress, and Caesar made no attempt to storm it. Instead he built siege lines around it and settled down to starve Vercingetorix into submission. The great four-day battle was a defence of his siege lines against attacks both from within the oppidum and from a huge relief army raised in the rest of Gaul. Caesar was massively outnumbered and his army spread thin along mile after mile of defensive works. Caesar’s account is detailed and vivid, and his testimony has been confirmed by major campaigns of excavation in the nineteenth century and again more recently. The booby-traps, defensive ditches and palisaded ramparts that he describes have been found. The line of his defences and the position of his forts have been traced. The proven accuracy of his description gives us confidence that his account of the actual fighting may also be reliable. And so we followed Caesar’s account closely in trying to reconstruct the battle on camera.

The site of Alesia today is a great symbol of French nationalism. The statue of Vercingetorix on the summit bears the features of Napoleon III, who sponsored the nineteenth-century excavations. Francois Mitterand took a close interest in the archaeology of Gallic War sites, and, apparently, wanted to be buried at Alesia (though he was not).
The landscapes and the sites are inspiring when set beside perhaps the finest work of military history to have survived from antiquity. But Caesar’s Gallic War is also a work of propaganda. It was Mark’s job to get beyond the spin and work out what Caesar was really thinking. He interpreted him as a cold, calculating professional soldier. Or worse: a chillingly remote mass-murderer. That at least is how it seemed to me.

What of Vercingetorix? He, of course, does not speak to us directly. We know of him only through the testimony of his enemy. We can reconstruct his world only from the silent evidence of mounds, ditches and rubbish-dumps. Is it legitimate for an archaeologist even to try to reconstruct the thoughts of a Celtic war-leader from such meagre clues? Don’t we just end up importing whatever modern baggage we happen to carry into the past we aim to reconstruct? Is it not beyond evidence, incapable of proof, and hopelessly ‘unscientific’ even to try?

But my visit to the sites – a copy of Caesar in my pocket – left me with the impression of a growing Gallic civilisation, a sophisticated aristocratic ruling class, and a brilliant and charismatic young war-leader who welded his people into a unified force and led them in a new style of war that brought the greatest empire of antiquity to the brink of defeat. I could not help seeing Vercingetorix as the leader of a great national liberation struggle. Watch the programme when it appears and see what you think. Does our interpretation stand up? Or are we just part of a TV stunt?

The programme referred to in this article is expected to go out as a BBC2 Timewatch documentary this autumn.