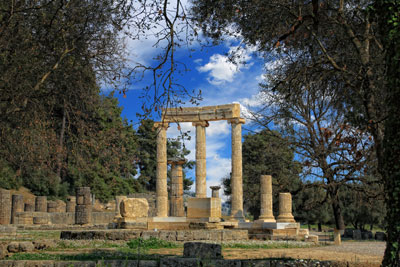 Would a modern visitor to the ancient Olympics find much that was familiar, or would he (sic: no women allowed) be phased by culture shock?

In the Olympic Stadium, there were no stands and no shade: you sat on a grassy bank under the searing heat of the midsummer sun. Naked athletes competed in foot-races, the pentathlon, horse- and chariot-races, and three combat sports – wrestling, boxing, and the almost no-holds-barred pankration, the crowd’s favourite, because there were virtually no rules and it was all blood and pain. Half the Olympic programme was given over to religious ritual: processions, hymn-singing, incense-burning, gory animal sacrifice, and strange incantations by exotically attired priests.

The Olympic site was not just a sports stadium; it was part-sanctuary, part-art gallery, and part-heritage trail. In the Temple’s inner sanctum, behind a dazzling colonnaded façade, sat a colossal gold-and-ivory (‘chryselephantine’) statue of Zeus, divine master-of-ceremonies. Outside was a mountainous heap of solidified ash: an altar formed of a thousand sacrifices, the ash from which had been turned into paste and slapped onto the sides, creating an edifice that looked like some sort of gigantic grey blancmange. All around were shrines, altars, and statues, forming a forest of venerable objects.

Fringe events included philosophy lectures, poetry readings, and sundry charlatans and cranks offering to predict the future. The nightlife was yet more exotic. No-one got any sleep, as parties went on through the small hours, and hundreds of prostitutes, men and boys, were busy touting their services until dawn. The Olympic Village was a vast, tented encampment, with inadequate water-supplies, heaps of stinking refuse, and huge, open, improvised latrines. The air was alive with millions of flies, mosquitoes, and wasps. By the end, no-one had washed properly for a week, and you could smell the Games a mile away. Or so it must have been.

Historical imagination
It is an interesting exercise for an archaeologist, using a mix of literary, artistic, and material evidence, to try to reconstruct the entire lived experience of a past event like the ancient Olympics. Usually, we restrict our interpretive hypotheses to matters for which direct evidence is available. We write about building techniques but not sexual practices, about trade links but not table manners, about toothache (when we have the skulls) but not typhoid (which does not infect bone).

Even when we use historical titbits to inform archaeological data, we are left with yawning gaps. The ancient writers tell us much more about wars and laws than they ever do about childcare, race relations, or lavatorial arrangements. We have to trawl through the small print for the occasional anthropological nugget, such as the fact that you could tell from the smell of his fart what the man in front had for dinner last night (grilled sprats) when serving as a rower in an Athenian trireme. (It’s there in Aristophanes, believe me.) So the only way to fill the gaps is to use what R G Collingwood called ‘the historical imagination’. What he had particularly in mind was the problem of human motivation. We often know what people did, but we can never know for sure why they did it. Even when they seem to tell us, we cannot guarantee their veracity; they may have reasons to conceal the truth. The historian must ‘imagine’ what is happening inside the heads of historical actors if he or she is to explain why things happened in the way they did. But this does not exhaust the realm of historical imagination. For antiquity – let alone prehistory – much of the very fabric of everyday social life is invisible. Where archaeology is our primary source, we are dependent on the vagaries and accidents of material-culture survival. Ceramic survives, but the woodwork has gone. We find broken pots, but rarely any complete. We have lots of stone reliefs, but not a single easel painting. Virtually all our statues have lost their paint. And so on.

Writing a guidebook
Because I wanted to show what it was really like to go to the ancient Olympics, I needed lots of historical imagination to fill the gaps. I also needed to indulge a somewhat disreputable willingness to plunder the comparative evidence – using what we know generally about ancient Greece to reconstruct what might have happened specifically at the Olympics, and using what we know about the Olympics in one period to reconstruct what might have been going on at another.

We know a lot, for example, about what the ancient Athenians ate and drank, about their meal-times, and table manners; whereas we know very little about these matters at the Olympics. To imagine that eating at the ancient Olympics was in many ways similar to eating in the ancient city of Athens is quite a leap. Equally problematic is the assumption that dishes described by the 4th century BC Sicilian gourmand Archestratos of Gela can be taken as evidence for what might have been eaten at the beginning of the century at Olympia. It is perhaps like comparing the food eaten in an upmarket West End restaurant in 2012 with that eaten at a Liverpool football match in 1952. But there is no other way to attempt a rounded reconstruction of past experience. And I deliberately chose a literary device that would force me to do this: I set myself the task of writing a tourist guidebook – a sort of 388 BC edition of the Rough Guide to the Olympics. I wanted readers to imagine themselves as actually being there, and this seemed to be the most direct way to achieve that. (The book is written, therefore, in the present tense.)

The archaeology of Olympic sites
Not the least of the challenges was the need for careful reconstruction of the built environment and the manipulated landscape setting. In archaeological terms, modern Olympic sites are easy. Whatever happens before or after, there is only one Olympic ‘phase’ of the site, whose structures and spaces embody a specific set of identities and values. The ancient Olympic site is much harder to read, for it is a palimpsest representing more than a millennium of religious and athletic activity. That we know a great deal about this palimpsest is down to the obsessive interest in the site shown by generations of Classical scholars. Olympia, forgotten during the Middle Ages, was rediscovered in 1766 by the English antiquarian Richard Chandler. It first saw excavation – by a French team in a six-week season – in 1829. But large-scale excavation occurred only with the great campaign of Professor Ernst Curtius between 1875 and 1881, when much of the ancient site was uncovered. The work was funded by the German government, with Wilhelm I, first Kaiser of the newly unified country, having heard Curtius lecture on Olympia way back in 1852. At the time, high-profile engagement with the Classical past was a feature of international rivalry. In the wake of the Franco-Prussian War, antagonism between France and Germany was at a peak. The prompt publication of annual excavation reports acted as both inspiration and spur to an aristocratic Frenchman with an antiquarian bent, one Baron Pierre de Coubertin. ‘Germany’, he wrote, ‘has brought to light the remains of Olympia; why should France not succeed in reviving its ancient glory?’ The modern Olympics – beginning with the Athens Games of 1896 – were spawned by a strange mix of archaeology and nationalism.