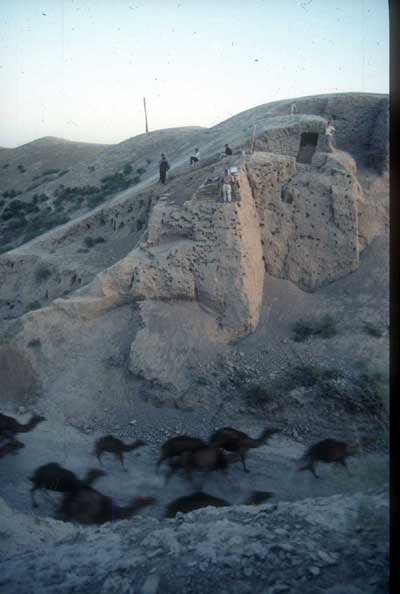 Merv, the subject of the the leading article in CWA3, was one of the greatest cities of Central Asia. In the12th century it was home to the great Persian mathematician and poet Omar Khayyam, the who penned the immortal Rubaiyat, a stanza of which opens our account. Recently a team from the British Museum and University College London have been excavating at the city.
Merv is a magical city for archaeologists, for there are in fact, three cities, which instead of being one on top of the other, were placed side by side.

The oldest city is that to the right, Gyaur Kala, or the ‘Unbelievers city’, founded originally as a Greek city by the successors to Alexander the Great. However it soon became a major eastern outpost of the Sasanian (Persian) empire. The citadel at the north, Erk Kala, is in fact an even older city.

However in the 6th century AD, following the Moslem take over, Gyuaur Kala was gradually abandoned, and a new city, Sultan Kala, grew up to the west. This reached its height in the 11th and 12th centuries AD, when Omar Khayyam wrote his poetry, and the great Sultan Sanjar mausoleum (seen above) was constructed.

However in 1221 the city was destroyed by the Mongols, under the son of Genghis Khan,. and it never recovered. In the 15th century a new town to the south, Abdhulla-Khan Kala was built by the Timurids; eventually the modern town sprang up to the south of that

The excavations, which are revealing the whole history of the Gyaur Kala town, are fully described in Current World Archaeology.