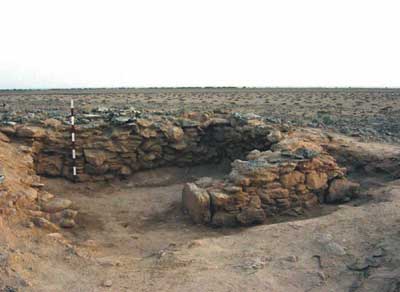 A group of stone houses dating to 5,000 BC has been found on Abu Dhabi’s Western island of Marawah. They are the oldest buildings of their type ever discovered in the United Arab Emirates.
The discovery was made by a team from the Abu Dhabi Islands Archaeological Survey, ADIAS, in spring 2003. While working at a site known as MR-11, the team examined a group of stone mounds that turned out to be three buildings. They fully excavated one of the structures. This proved to be a well-constructed house with stone walls still surviving to a height of almost a metre in some places. During the excavations, a fine flint spear and flint arrowhead were found, as well as a fragment of a stone pestle, probably used for grinding food items.
Radiocarbon dates on samples of ash taken from the floors of two of the buildings, indicated that the buildings were in use between 4,500 and 5,000 BC (see photograph). No stone-built houses dating to this particular period are known from elsewhere in the UAE, although similar, but less well-preserved examples, have been noted elsewhere in the Arabian peninsula: at Shagra in Qatar, and at Sabiyah in Kuwait. At this time, the locals were trading by sea with Mesopotamia (modern-day Iraq), marking the beginning of the UAE’s well-established tradition of maritime trade.
‘It seems that we have only just so far scratched the surface. There are almost certainly a whole series of stone buildings at the site, indicating that a significant community was inhabiting the island of Marawah around 5000 BC’, says Mark Beech, the ADIAS Senior Resident Archaeologist. Beech has shown that these early inhabitants of the UAE had domestic animals, like sheep and goats, but also supplemented their diet by hunting gazelles and by exploiting the fruits of the sea. In addition to eating a wide range of fish, they also caught dolphins, dugong and turtle and ate shellfish – including the pearl oyster. The pearling trade of the Southern Gulf probably began around this time.
Marawah island has diverse remains, ranging from the Late Stone Age to the Late Islamic period. It is therefore, particularly appropriate that Marawah has recently become fully-protected as part of the Marawah Marine Protected Area. A new season of archaeological fieldwork is due to commence on Marawah next March and April and at least three further seasons of excavation are planned at this remarkable site.
For further information check out the team’s recent newsletter at:
www.adias-uae.com/adiasnews01-04.html#marawah