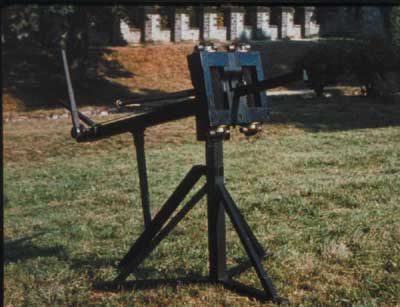 Early artillery
c. 400 BC – AD 100
Torsion artillery was apparently invented in a Greek workshop in Sicily early in the fourth century BC. Each machine was powered by two spring-bundles formed by ropes of twisted sinew or hair. At top and bottom of each spring-frame the rope was threaded under tension through a round metal washer and over a metal crosspiece, up and down until the washer was filled. Bow-arms embedded in the springs projected outwards, and a bow-string was stretched between their far ends. Since washer and cross-piece could be rotated in a metal counterplate fixed to the wooden frame, the spring-bundles could be twisted to tighten them and increase the stored torsion power. Between the springs ran the stock, which comprised a fixed part, the case, and a moving part, the slider. The latter, carrying at the back a claw and trigger mechanism, was slid forward to engage the bow-string, and a winch operated by hand-spikes and a ratchet and pawl mechanism then hauled it back, pulling the arms together and tightening the springs. When the bow-string was released, the energy stored in the springs was imparted to the missile, its velocity rising as it accelerated down the slider. Both arrow-shooters and stone-throwers were made, each in a variety of calibres, and experimental reconstructions have shown that missiles may have been hurled 300 or even 400m.

Dating the change
When did the change happen? In the civil wars of AD 69, the Year of Four Emperors, the Roman army was still using old-style catapults. The armour plating from the front of two such catapults was found on the site of the second battle of Cremona, and the late-first-century tombstone of the military engineer (architectus) Gaius Vedennius Moderatus clearly depicts this sort of machine. Contemporary writers use old-fashioned terms for artillery: scorpio for a light arrow-shooter, catapulta for a heavier arrow-shooter, and ballista for a stone-thrower. The engineer Frontinus, writing in the 80s or 90s AD, specifically stated that there had been no recent innovations in engines of war. We find the earliest evidence for the new machines on Trajan’s Column (erected AD 113) and in Heron’s Cheiroballistra (probably c. AD 100). Later writers transfer the term ballista from stone-thrower to arrow-shooter. A date around AD 100 seems highly likely.
And the inventor? We will never know for sure, but a good guess would be Apollodorus of Damascus. Rome’s chief engineer under Trajan (AD 98-117) and Hadrian (AD 117-138) until his banishment in AD 129, his building projects included military bridges over the Danube, Trajan’s Forum in Rome, Trajan’s Arch at Ancona, and Hadrian’s Temple of Venus and Rome. He also wrote On Engines of War, a treatise which survives – though it does not describe the new type of artillery.
Whether or not Apollodorus was the inventor, the evidence for a technological revolution in artillery design around AD 100 now seems compelling. The new machines, ballistae for arrow-shooting and onagri for stone-throwing (see box feature ‘Stone-throwers’), would remain in service for 500 years. Then, soon before AD 600, there was a second artillery revolution – and the last before the invention of cannon. Torsion artillery was replaced by the crossbow for shooting arrows and the trebuchet, powered by men pulling ropes or later by a heavy counter-weight, for hurling stones.

Stone-throwers
Early stone-throwers, though different in detail and heavier, worked on exactly the same principle as arrow-shooters, the bow-string carrying a flattish pouch at the centre to propel the stone. They were called ballistae to distinguish them from arrow-shooters (catapultae). But by the third if not the second century AD, the term for a stone-thrower had changed to onager or scorpio. The tail of a scorpion, explains the Christian writer Tertullian in the early third century, ‘rising in a curved sweep, draws its hooked point up on high like an engine … For this reason the military machine, which activates its missiles by retracting, is also named after the scorpion.’ Ammianus Marcellinus, the fourth-century historian, agrees: ‘A scorpio is so called because it has its sting upraised above it.’
There is no dispute that machines with a sling attached to the end of a single arm, throwing stones by swinging them upwards and over, were in use by the fourth century. But Michael Lewis is convinced they came in much earlier, when the terms used for artillery changed comprehensively about AD 100, and a new design for stone-throwers complemented that for arrow-shooters. Experiments show that the onager outperforms the earlier stone-thrower by roughly 80%. ‘The reason is simple,’ says Lewis. ‘The greater arm-swing allows a longer time for acceleration, and the much greater length of arm-cum-sling imparts a still greater velocity to the missile. Speed at discharge is the fundamental secret.’

A note on sinew rope
What do you use to make a quality spring for an ancient catapult? All ancient writers agree that it is animal sinew, and a Vindolanda tablet records delivery of 100lbs of ‘ballista sinew’.
Michael Lewis explains why it mattered so much: ‘The arc of the bow-swing was only one of two basic parameters determining the power of ancient artillery. The other was the elasticity of the actual spring itself, which is central to the rate of acceleration when you discharge. Before the revolution, either hair or animal sinew was used for springs. After it, the ancient texts refer only to sinew. Hair was no longer adequate. Only animal sinew was elastic enough. The problem is that no one has ever made enough sinew rope to build a full-size reconstruction based on this material.’
Among several attempts to make sinew rope, that of architect and archaeologist Digby Stevenson has been the most successful. Using sinew from cattle and American elk, he first cut away all excess meat and fat (to reduce the stench!), and then allowed the sinew to dry out naturally over about a week. The sinew was then pounded with a hammer and shredded with a metal comb to separate out the individual fibres – a laborious and time-consuming procedure for which there were no short-cuts. The fibres were then spun into yarn, a process that could be done by drop-spindle, spinning wheel, or manually by fixing one end in place and twisting in the fibres while keeping the yarn extended and taut. Next, the finished yarn was twisted into strands of rope (each of eight or nine threads’ thickness), and finally these strands were twisted together to form three-strand rope. This could now be wound onto a spring-frame under tension until a full spring-bundle comprising many thicknesses of rope had been formed.
Digby Stevenson’s experiments have shown that the production of sinew rope for ancient catapults was a skilled, time-consuming and expensive process. What we do not yet know is just how powerful a catapult using sinew rope would have been. To find out, someone will have to make a lot of it. At least we now know how.