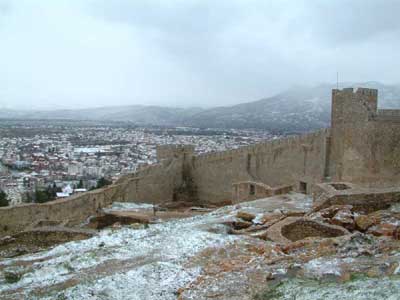 Over the past month I criss-crossed Italy, Albania and Greece as our projects in these regions began to evolve a new shape.
First in Italy I had the pleasure to be the first international figure to speak in the new university centre in Grossetto (located inside its mighty late medieval fortress). Grossetto is a seemingly sleepy Tuscan coastal town. In fact, its population is nearly the size of Norwich.

The new mayor, keenly aware of the importance of heritage tourism in Tuscany – and familiar with Riccardo Francovich’s remarkable projects throughout this region – approached Siena University and Riccardo and found the funds to establish a university course in archaeology and cultural heritage. On its opening day in October 2002 some 35 students enrolled; now, some sixty students have signed up, such is its success. Italy is infamous for the dead hand of its corrupt bureaucracy (see Tobias Jones’s The Dark Heart of Italy, 2003), but those with energy like Riccardo Francovich can still make the unthinkable (by UK standards) happen in record time.

Albania
Francovich’s constellation of research projects driven by cultural heritage funding and based upon using high calibre computer-aided apparatus has been one of our models for developing archaeology in Albania. Notwithstanding the dramatic lack of investment in Albania’s public sector, there is the kind of energy about that Francovich draws upon. Resourced by the Packard Humanities Institute (PHI), the projects are going from strength to strength. So my visit in December was to present our latest publication, Oliver Gilkes’s The Theatre at Butrint, published by the British School at Athens to the Albanian Academy of Sciences.

The TV journalists loved it principally because we were able to show the film of Luigi Ugolini, the Italian archaeologist, excavating in the theatre in 1930. Indeed, archaeology has come to figure prominently in the Albanian press, such is everyone’s sense of the importance of the past and, in particular, its importance for generating cultural heritage tourism. So, while I was in Tirana, in the midst of a particularly brutal political confrontation between the party leaders, the quest to save the archaeology of Durres (ancient Dyrrachium) was mentioned as high in everyone’s agenda. As it happens, working with John Wilkes, and Adam Gutteridge and Henry Hurst from Cambridge University and Kim Bowes from Yale as well as an ever growing team of young Albanian graduates, we have carried out several high profile rescue projects in the city. Foremost of these was an incisive dig in the tiny chapel with wall mosaics inside the well-preserved Trajanic amphitheatre. Our project, as Kim Bowes describes in the latest Journal of Roman Archaeology, showed that this chapel was not Justinianic as had always been believed but belonged instead to the age of the First Crusade.

Macedonia
Meanwhile we travelled to Macedonia for meetings, the 130 kilometres to the ancient lakeside centre of Ohrid took more than four hours on broken roads in blizzards. Here the Macedonian authorities have taken the cultural heritage mission to heart as they have rebuilt this fragile ex-Yugoslavian country since 2001. The immense hilltop castle has been laid bare by massive clearance excavations, complemented by stratigraphic excavations in the Roman theatre and in other parts of the town. The theatre, unlike the one at Butrint, is a fascinating amalgam of phases, and given its well-preserved state is certain to be an enduring attraction for archaeologists and summer visitors alike. On cue, through the drifting snow came a bus tour of Greeks.

Albania
Ohrid, with its well-conserved houses, many now hotels, is one model for a project at the Ottoman museum town of Gjirokastra in southern Albania. Some 250 vernacular buildings survive, now in a deplorable condition. Nowhere provides a more pressing example of cultural heritage in danger. Working with the national and municipal authorities we submitted an application for UNESCO world heritage status – a drafting challenge if ever there was one. But greater still was the challenge to get agreement upon actually restoring monuments. On this wet December afternoon we finally started, and a gaggle of us stared as a park area surrounded by seven ornamental Ottoman fountains was cleared, following a joint Albanian-British architectural scheme.

My last night on this occasion was spent with the newly-elected mayor of the port of Saranda, near Butrint. He wanted to understand how we might collaborate in the future. So, in his grimly appointed office with the electricity coming on and off due to nationwide power-cuts, we talked about all the possibilities. As my words were translated, I surmised that, as so often in the past, so today, I must have appeared a cross between a visionary and a Martian. The mayor and his counsellors had seen the unedifying tourist villages on Corfu but not places like Ohrid or the successful world heritage sites in Croatia and Montenegro that are the economic and cultural powerhouses in the revival of these hitherto troubled states.

Leaving the next day, a mild storm blew up and the ferry to Greece opted not to run. So, like many an impoverished refugee, I carried my bags through the mountain pass to the Greek border above Igoumenitsa, where on seeing me and hearing my tale they were convinced, not for the first time, that cultural heritage was a front for international terrorism.