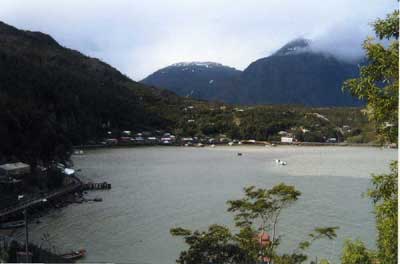 In May 1741, the 28-gun HMS Wager struck rocks not far from a remote island in Chilean Patagonia, now named Isla Wager. The Scientific Exploration Society is currently organising a programme of investigation of the wreck site and its environs; details to follow.

The Wager was part of a British Squadron of Warships under Commodore Anson, and the ensuing post-wreck story is one of the great sagas of the sea. Many of her crew reached the island safely and, since the ship was the store vessel for the Squadron, they were able to salvage sufficient food to exist on the island for many months. However, once ashore a dispute arose regarding the Captain’s powers of command over the soldiers who had been aboard and the sailors who, once their ship was wrecked, were no longer paid by the Navy. To some eyes, what now happened amounted to mutiny and after the Captain had shot dead a Midshipman the survivors split into two groups. The Captain and a party of officers and men, numbering around 20, eventually sailed northward in open boats hoping to reach civilization. Some 80 of the crew and soldiers went south in an extended long boat, through the Straits of Magellan to Brazil and thence to Britain. Only 12 survived this perilous voyage. Some died of starvation, others drowned and several were murdered by savages.

The Captain’s party, which included Midshipman Byron, later Admiral the Lord Byron, grandfather of the famous poet, suffered unimaginable privations before being helped by a friendly Chunos Indian chief named Martin, who took the remaining last four survivors in canoes to the island of Chiloe. There, the four officers, including Byron, were cared for extremely well. A local beauty even begged the handsome Byron to marry her, and her uncle a rich priest offered Byron a huge treasure if he would. Byron, a staunch naval officer, believed it his duty to return to England and declined. After many months in Chiloe the survivors were sent to Valpariso and then Santiago where again, they were treated with much kindness. Even the Spanish Admiral, sent to defeat Anson (Britain was then at war with Spain) took a liking to them.

Eventually the four reached England, by which time Anson had returned in triumph and was now an Admiral. A court-martial absolved the Captain of blame for the loss of HMS Wager and no action was taken against those members of the crew who had disobeyed his orders. However, to avoid such a situation reoccurring, Admiral Anson introduced an Act of Parliament in 1748 extending Naval discipline to crews wrecked, lost or captured. This led to the formation of the Marines, now the Royal Marines in 1755.

Byron later returned to the area leading a voyage of exploration and also searched for survivors of HMS Wager, but found only blue eyed, fair haired children! Byron never forgot the enormous kindness and hospitality of the people of Chile.

The Scientific Exploration Society, first came to Chile in 1984 and set up Operation Raleigh, now Raleigh International, which has given young people of many nations – including Chilean youngsters – development training. In October 2000, HRH Prince William, joined one of the expeditions.

The Scientific Exploration Society is now in the process of setting up a new project to explore the history of the event, survey the wreck site, and at the same time, carry out community aid and scientific tasks with the Corporation National Forest (CONAF) in the Tortel area. The Society aims to involve members of the Chilean Navy, the Royal Navy and Royal Marines in the project.

For a period of up to 30 days in Nov/Dec 2006, Colonel John Blashford-Snell will lead a team of around 20 using a chartered Chilean vessel to sail to Wager Island, set up a base and carry out the survey. In addition to the archaeological survey work, a small team will assist CONAF with a community aid project, possibly to provide unpolluted drinking water in Tortel. The team will study the movement of two glaciers and make records of local wildlife. If finance can be found, a small eco-tourist information centre would be set up in Tortel. There are also plans to seek out a cave, discovered by Byron in 1742, that then contained mummified bodies.

The total number of personnel on the expedition will probably be 26. Divers, conservationists and all those interested in history, the sea and the stunning beauty of Patagonia are currently being sought to form the team. For further information and costings please phone the Scientific Exploration Society on 01747 854 898 or email [email protected] Website www. ses-explore.org.