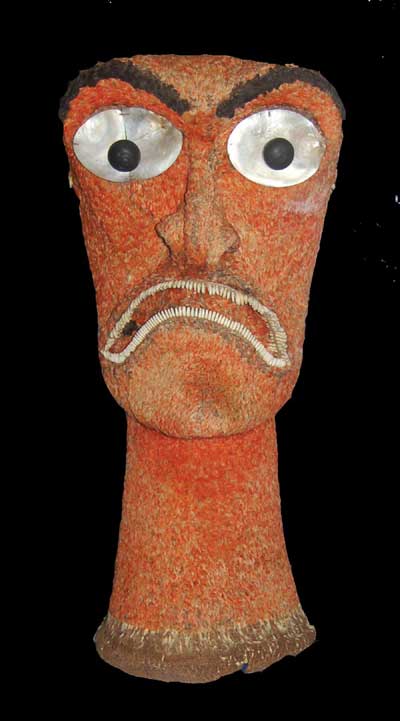 Tapu was taken up in early studies of comparative religion, and later adopted by Freud and other psychoanalysts, and has come to refer more and more to what is dangerous and forbidden. The Polynesian meanings of tapu, relating to the presence of the power of the Gods and containing and wrapping this power, have been lost in translation.

Among the finest collections of Polynesian material are those in the British Museum. Many of them pre- or immediately post-contact – that is, before the Polynesian art had been contaminated by European ideals. Thus, when Steven Hooper, the Director of the Sainsbury Research Unit at the University of East Anglia decided to set up an exhibition on Pacific Encounters: Art and Divinity in Polynesia, 1760-1860, he inevitably borrowed most of the material from the British Museum. When Neil MacGregor, the Director of the Museum, saw the Norwich exhibition, he was entranced. “We must have this ourselves” he said, for few of the objects are on permanent display. So he gave Lissant Bolton, Julie Adams and Jill Hasell, nine months to prepare a new exhibition which runs at the British Museum from 28th September 2006 to 7th January 2007. Many will visit the exhibition to see the art; CWA readers will also visit to pay homage to the Gods and to see a splendid example of life in a chiefdom society. (The catalogue on sale: Pacific Encounters, by Steven Hooper, though published by the British Museum Press (£25), is in fact the catalogue of the Norwich exhibition).

The oldest object in the exhibition is also the least ritual: a Polynesian boat that even predates Captain Cook. It was brought back by Captain Samuel Wallis in 1766-8, lashed to the deck of The Dolphin, the ship in which he circumnavigated the world. Wood is rare in Polynesia and thus the boat is made from small sections of wood tightly sewn together with coconut matting.

The absence of many of the local materials also underlies many of the wonderfully coloured cloaks that were such a feature of Polynesian life. Cloaks were needed to cover and conceal that which was Tapu. Some of the finest were made from barkcloth and the feathers of tiny red birds – red being a particularly holy colour not only because red is the colour of blood, and thus thought to be potent, but also because red was such an unusual and outstanding colour in the green islands of Polynesia. Such feathers were also used to make up the feathered head with the feathers set on a foundation of twined basketry, the eyes represented by a pearl oyster shell; not forgetting the teeth of which about 200 were taken from dogs.

But the best way of keeping the Gods firmly under control was to wrap them up, and the largest single exhibit appears to be a roll of cloth. However at the centre was a God, his head peeping out at one end. The exhibition also has some fine examples of unwrapped Gods: their more intimate parts often seemed shocking to the members of the London Missionary Society who collected many of them, who sometimes castrated them, and sometimes covered them with little skirts to protect the Gods’ modesty. But one should remember that originally they would have been kept wrapped up anyway.

The best known of all the Gods in Rurutu, one of the Austral Islands, was A’a, presented by the Rurutuan islanders in August 1821 to the Rev. John Williams. The figure has a hollowed body with 30 small figures distributed over its surface. It became the prize trophy of the London Missionary Society, and was widely exhibited, and Picasso liked it so much that he had a cast of it prominently displayed in his studio.

One of the problems of Tapu was that the chiefs, being the descendents of Gods, were themselves highly Tapu and therefore had to be treated carefully. The tattooing of a chief’s body was a way of wrapping it in images and in some islands the more highly tattooed you were, the higher your position in the hierarchy. The exhibition has several examples showing how the objects carried by these tattooed figures in paintings and drawings can be paralleled by the objects in the collections. The best example is that of a priest with an elaborate headdress of an unknown type and Julie Adams, the assistant curator, describes her delight in going through the collections and suddenly finding the exact headdress which now forms one of the highlights of the exhibition.

The main European discovery of Polynesia came in a flurry from the 1760s onwards. However in 1797 Christian missionaries arrived, and by 1830s conversion to Christianity was widespread, writes the curator, Lissant Bolton. Islanders converted for many reasons. Some were compelled by their chiefs to convert. For others, Christianity was part of a new world brought to them by Europeans, which they embraced along with metal tools, firearms, cloth and books. For some, the idea of a God beyond the physical world, offering unconditional love, freed them from the constant worry of managing divine power. Sometimes people signalled their conversion by explicitly desecrating an important tapu restriction. Today many Polynesians are committed Christians, but despite conversion, many aspects of Polynesian cosmology have been sustained through the last two centuries, and in Hawaii and New Zealand especially, people are identifying more and more with the traditional rituals and practices that have been passed down to them.