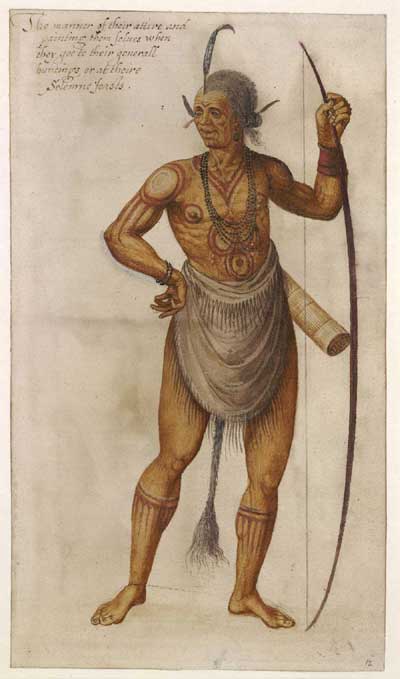 What were the indigenous Americans like before the English arrived? The best evidence is that obtained at the time of the very first contact, and here we are particularly fortune in that the locals were depicted by a talented English artist, John White, whose drawings are now on display in an exhibition at the British Museum.

John White accompanied Walter Raleigh’s first attempts to establish a colony in Virginia now confusingly called North Carolina. He went out five times on each occasion returning successfully and it is after the second voyage, in 1585, that he made the splendid paintings of life in the colonies, the majority of them watercolours of birds and animals. However those that interest us most are of the people he found there – various tribes of North Carolina Algonquians.

On his return, his paintings were mounted in an album. It is not quite clear to whom it was first presented but we do know that the album was sold to the Earl of Charlemont in the late 18th century. It was then sent to Sotheby’s in London for sale in the mid 19th century.

Unfortunately a fire broke out in the warehouse where the book was stored; its spine was burnt.

But worse, the precious book lay soaking for three weeks.

Each painting had been interleaved with a sheet of blank paper and some pigments off set onto these blank sheets creating a faint mirror image. Thus the original paintings, though vibrant, are in fact not as bright as they should be and the mirror images were carefully collected to form a second album. Both albums were then purchased by the British Museum for just over £200. Engravings were made of some of the pictures in 1590 by Theodor de Bry, the man responsible for spreading White’s illustrations throughout Europe. But de Bry brought with him a certain artistic license (covering bodies that had previously been naked, adding Grecian hairdos) and some also show background scenes which may, or may probably not, be accurate.

All 75 of John White’s illustrations, along with most of de Bry’s engravings, are currently on show at the British Museum. Of importance to us are two images showing two different villages, one enclosed in a circular formation and one more rectangular in shape, but both showing rectangular structures, possibly long houses. There is also a fine representation of a charnel house and a couple of representations of the chiefs. These images plus some of the best of the rest are presented in this feature.

Incidentally, lovers of British archaeology will also be smitten with White’s depictions of what he imagined the Picts to be like (also on show in the exhibition). White selects Pictish features referred to by the classical authors, creating alarming people replete with blue tinted skin, woad dress, and a ferocious blood lust (one Pict holds a severed head aloft) – quite a contrast to his mild mannered, rather benign Native Americans.

The exhibition A New World: England’s first view of America is on until 17 June; admission £7. When the exhibition finishes at the British Museum it will travel to America so the Americans can share this early glimpse of an element of their own history … Sadly this initial English expedition to North America failed.

Relationships with the Indians soon soured. Having accused the Indians of stealing a silver cup, the English retaliated by burning the village and the crops. Thus there was not enough food for the Indians let alone for the foreign interlopers. Everyone starved. John White returned a year later in 1587 with 115 men, women and children to found a permanent colony on the Chesapeake, a little further north. But they were landed back on Roanoke where the soldiers had killed the chief the previous year and the Indians soon retaliated by killing one of the colonists. White’s daughter gave birth shortly afterwards to the first English child born in America, Virginia Dare. As Governor, White was persuaded to return to England for supplies and help, but he arrived in England only to find the Armada threatening. For two years no ships could be spared for American adventures. When eventually White et al. returned, the original settlement had been abandoned. Those left behind had apparently moved on but were never found. The last we hear of John White, he was living on Raleigh’s lands in Ireland in 1593.

Nevertheless, the work done by John White and in particular the superb maps that he drew, plus his descriptions of the wild-life and the Native Americans, led the way to the ultimately successful settlement (from the English perspective) at Jamestown under King James the First. Chesapeake Bay offered a superb anchorage and even if the original site at Jamestown itself proved too damp and swampy for permanent settlement, nonetheless it made way for the move to Williamsburg which was the first triumphant English settlement in Virginia.