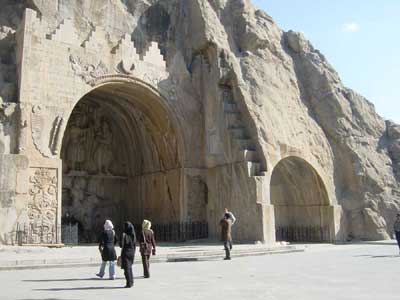 The conferment of UNESCO World Heritage Site status is rarely an event that makes the national news, but when Bisitun in Iran was granted WHS status, the event was marked by enthusiastic celebrations.

Newspapers the next day reported that there had been 20,000 of us gathered on the plain below the cliff, some of us lucky enough to be seated near the front where we gained a close-up view of the dignitaries, including the Vice-President of Iran, plus musicians and poets there for the occasion. We were treated to stunning performances of local music and recitals of poetry, as well as a spectacular fireworks display.

What is there at Bisitun to demand such celebrations? Bisitun is in fact a rock-cut relief, located high up on a cliff face. Carved into the stone is a figure of the famed Achaemenid king Darius the Great (521-486 BC) who stands before a group of defeated rebel leaders. Below and around this scene are neatly inscribed texts in cuneiform script. Bisitun is a critically important site in Near Eastern archaeology for these texts, written in three languages – Old Persian, Elamite, and Babylonian – enabled the decipherment of cuneiform Babylonian in the early 19th century AD. This achievement assisted greatly in the rediscovery of the long-lost ancient civilizations of Assyria, Babylonia, and Elam. We were delighted to be able to visit such an important site.

We began our visit to Iran with a couple of days in Tehran, staying at the very comfortable premises of the British Institute of Persian Studies (who generously supported our visit to Iran), where we made good use of the excellent library and other facilities.

A tour of Tehran’s National Museum of Iran was most rewarding: its exhibits illustrate the rich, diverse history of the country from early prehistory through to the Achaemenid and later periods. While there we were also fortunate to spend time with Dr Vesta Sarkhosh Curtis, of the British Museum, and her colleagues who were busily cataloguing and recording Sasanian and Parthian coins in the National Museum’s collections.

From the capital we took a night flight to Kermanshah, where we were accommodated in the brand new Jamshid Hotel, opened only one month previously and located on the outskirts of the city, close to the glorious Sasanian rock-cut monuments of Taq-i Bustan. This spectacular site is dated to the 4th-6th centuries AD and consists of two ivans or grottoes decorated with relief carvings and inscriptions.

Several Sasanian kings are portrayed, and of these perhaps the most impressive is a larger than life size statue of Khosrow II Aparviz (reigned 590-628 AD) in jousting costume. It is a wonderful spectacle.

Once arrived in Kermanshah, we participated fully in an archaeological symposium, organised by the Iranian Centre for Archaeological Research under its new Director, the vibrant Dr Hassan Fazeli.

The theme was Iranian archaeology: western region, and among the participants was a handful of colleagues from Belgium, France, Denmark, and the UK. But the overwhelming majority of the papers and the attendees were Iranian, which was one of the great strengths of the occasion, as it was an opportunity for us to hear first-hand about the wide range of archaeological projects currently being undertaken by Iranian colleagues in this part of Iran. The symposium consisted of two full days of papers presented at the capacious conference centre. Wendy and I both gave papers dealing with aspects of the archaeology of Godin Tepe, a 4th millennium BC site. Godin Tepe was excavated by Canadian and Iranian archaeologists in the 1970s and shows dramatic evidence for contacts between highland Iran and lowland Mesopotamia around 3200 BC.

This is detectable in the form of architecture, pottery styles, and above all clay tablets with numerical and pictographic signs that form some of the earliest evidence for writing from anywhere in the world.

Other papers ranged across the entire chronological span, from the Palaeolithic, through the Neolithic, Bronze, and Iron Ages, and all episodes of Iranian history, including the most recent. It was truly exciting to learn of the latest surveys and excavations in the region conducted by Iranian scholars from local universities, such as Hamedan, as well as from Tehran. A tremendous aspect was the high student turn-out. There were about 200 Iranian students at the symposium and we met and talked with a great many of them. Their enthusiasm for academic exchange was infectious and we came away from the symposium hugely impressed with the spirit of enquiry and research capability of Iran’s young people.

The famed hospitality of Iran was also everywhere in evidence. We were fed lavishly at every meal and treated to an unforgettable evening of local traditional music by night at the floodlit Taqi Bustan. We were presented with books, brochures, posters, CDs, and delicious biscuits by the box, rapidly over-filling any available space in our luggage. But as the last bangs of the celebratory fireworks from the UNESCO party at Bisitun echoed across the Zagros mountains and exuberant showers of light streamed through the night sky, our time was up and we made our way to the airport for the flight to Tehran and the trip back to England. We had met some old friends in Iran and we had made a great many new ones.