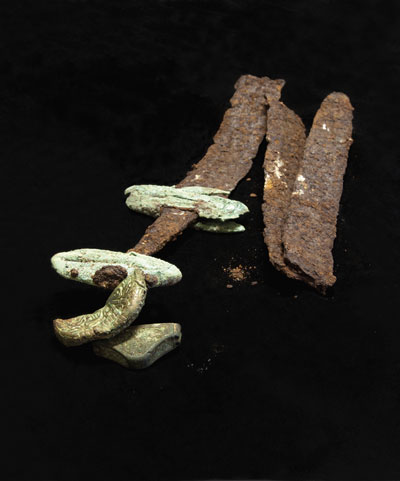 Warriors cut down in battle on the Estonian island of Saaremaa were buried aboard their ship – the earliest known Viking vessel to sail across the Baltic Sea. Nearby is a smaller boat, its slain sitting eerily upright. Who are these dead men? Jüri Peets reveals his discovery of a mysterious double Viking ship burial.

Bone and ancient artefacts began to appear almost as soon as workmen cut into the earth. They were laying an electric cable for a cycle path through the tiny village of Salme on the island of Saaremaa in Estonia. Work stopped immediately, and the archaeologists were called in.

That was in 2008. By the time excavations were complete, in 2012, they had revealed a most extraordinary discovery: two Viking boat burials, within 30m (98ft) of each other, and both dating to about AD 750, the very beginning of the Viking period.

The larger of the vessels is the first known example of a sailing ship to cross the Baltic Sea. Both are about 100 years older than the Oseberg boat in Norway – the earliest example of a Viking boat to be found in the region. And both bore a grim cargo: the remains of several men killed in battle. Alongside the dead were the possessions they had carried with them in life: their weapons, gaming pieces, knives, whetstones, and combs.

None of the artefacts recovered at Salme come from this region: they belonged to a style associated with Scandinavian settlements across the Baltic Sea. These men, then, were strangers to these shores.

Finding the first burial
This smaller vessel was the first to be discovered. When the archaeologists, led by Jüri Peets of Tallinn University, began excavation at Salme, they recovered fragments of bent swords, boat rivets, and two antler dice from soil disturbed by the workmen digging the cable trench.

As the archaeologists continued to sift through the soil, they found more fragments of weapons, human and animal bones, and a total of 75 gaming pieces turned from whale bone or made from bovine femur-heads. Five of these gaming pieces are decorated with engraved ornamentation.

The style of weapon fragments suggests they belong to the Vendel Period or the beginning of the Viking Age, about AD 600-800. They had been deliberately damaged by bending, hacking, and breaking – a common practice during this period – and showed evidence of having been in a fire. Subsequent carbon-14 analyses of the human and animal bones confirmed a date of about AD 750, the late Pre-Viking Period.

The cable trench had cut through the stern of the boat – Salme I – but a section of the prow was still evident. Most of the wood had rotted away. However, the archaeologists were able to trace the lower section of the boat’s original contours by the three rows of rivets that remained.

The boat, therefore, was clinker-built – that is, the hull was formed by overlapping planks secured by rivets. It was about 11.5m (38ft) long with a maximum width of about 2m (6ft 6in). Its size and shape suggest it would have been a 12-oar rowing vessel. The rivets are only about 3-4cm (1-1.5in) long, which means the planks would have been very thin. So, Salme I was light, fast, and easy to manoeuvre: almost certainly a military ship.

The skeletal remains of seven individuals were recovered. All seven are male, and all are of impressive stature. Three of the men were more than 30 years old when they died, the others were under 30 years of age. Examination of the osteological and dental evidence showed that this crew enjoyed good health – and only one of them suffered tooth decay.

The prow of the boat points to the north-east, and most of the human remains were found to the middle and stern. Because part of the boat was destroyed by the cable trench, it is difficult to ascertain exactly how or where they were positioned. However, no traces of human or other remains associated with the boat were found outside the hull’s contours in areas not affected by the trench disturbance, suggesting all seven had been buried within it. Strangely, the undamaged articulated skeletal remains indicated that rather than being laid flat, the men were buried in a sitting position – perhaps at what would have been their work-stations during life.

The animal bones recovered showed butchery marks. Perhaps they were part of a funerary feast, or supplies the crew had brought along for themselves. Interestingly, several decapitated goshawks and a sparrowhawk were also found. These birds of prey would have been used for hunting fresh food for the crew as they travelled along the shoreline.

What is absent can be as significant as what is present: usually horse and dog bones are included in Viking boat burials as prestige possessions of the deceased, yet none were recovered from Salme I. These, men were buried far from home, with only the possessions they carried aboard ship with them during their lifetime.

Finding the second ship
In 2010, the team of archaeologists extended their search. The new area took in the yard that belonged to a farm, demolished by a destroyer battalion of the Red Army in the autumn of 1941. Almost immediately, pieces belonging to two sword hilts were uncovered, along with a scattering of boat rivets and then more finds.

Lying about 15-20cm (6-8in) below the surface, were the contours of a second Vendel-era ship. Like Salme I, it pointed in a north-east/south-west direction. The size of the rivets and the distance between the board contours – about 3.20m (10ft) – indicated immediately that this vessel was considerably larger than the first. The ditch cut for the electrical cable crossed the excavation trench but this, rather fortuitously, exposed an important clue: the dark, rotted outline of the ship’s keel beneath the hull. Salme II, then, was a sailing ship.

This ship, Salme II, also carried crew: two well-preserved human skeletons lay on the western side of the hull. Beside them were two shield bosses, several sword fragments, and a complete skeleton of a dog that had been slashed in two.

These individuals had met with a violent end. The humerus of one had been chopped through in three places; the other had two injuries made to the front of his skull by either a sword or an axe.

As excavation continued, it became clear that there were many more skeletons here. This was, in effect, a closely packed multi-layered mass grave: a staggering 33 individuals were eventually revealed, packed four deep. The human remains and grave goods were located in several layers in a very small area in the middle of the boat. As a result, it was often difficult to determine which of the find assemblages belonged to which skeletons. This work continues in the laboratory, and the final results will have to wait until further extensive analysis of the finds is completed.

A large calibre shell or bomb, almost certainly courtesy of the Red Army on their return in 1944, had slightly damaged the hull of the boat. But as the crater had filled up again, some bones, boat rivets and other artefacts had fallen into it. Among these finds were four gaming pieces, one made from walrus tusk, as well as fragments of two single-edged swords and a broken double-edged sword. The double-edged sword was, rather curiously, discovered in an upright position directly beneath the yellow-mantled cable.

The dead on Salme II were buried in four layers: those in the bottom layer had been arranged between the ribs of the ship, some facing south-east, some north-west. It appears, therefore, that the orientation of the ship, along the north-east/south-west axis – which, in summer, follows the line of the Milky Way, or ‘Souls’ Way’ – was of more importance symbolically than the orientation of the dead. Most Scandinavian ship burials lie more or less along this axis.

The largest group of finds from Salme II – aside from rivets, of which there were about 1,000 – are the gaming pieces. Two were made from walrus tusk, and 326 from whale bone. Five or six dice, of different materials, were also recovered.

Most of the gaming pieces are similar in shape, material, and size to those found in the first burial. However, a set of 11, found around the skull of Skeleton XIV on Salme II, are considerably smaller than the rest. Also, while the gaming ‘king’ from Salme I was larger than other pieces and was covered with intricate plaited decoration, the ‘king’ from this assemblage simply had an iron tack on top.

A larger ‘king’ piece was found in the jaw region of Skeleton XIV, as if deliberately placed in the dead man’s mouth. Was this a symbolic act denoting this person’s higher status? Certainly, this individual was richly furnished with grave goods that included fragments of a double-edged sword with a ringed hilt of gilt bronze. Furthermore, he was positioned along the central axis of the boat.

Most of the gaming pieces appeared to have been scattered among the skeletons. However, there was a clear assemblage of pieces recovered from between the legs near the pelvis of Skeleton 30, buried on the bottom of the ship.