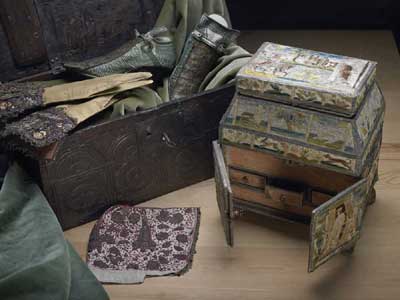 The exhibition, entitled Journey to the New World: London 1606 to Virginia 1607, tells how in 1606 London’s Virginia Company received a charter from James I to ‘make habitation, plantation and … deduce a colony of sundry of our people’ in a vast tract of North America between the French occupied lands to the north of the St Lawrence river and Spanish territories in Florida. Eight months later, the Virginia Company sent three small merchant ships: the Susan Constant, Godspeed and Discovery, which departed from Blackwall. They were six months at sea, arriving in Virginia on 13th May 1607. A total of 104 men and boys landed and began work on a fortified trading outpost – James Towne – the first permanent English settlement in America.

Jamestown provided the springboard for the development of the English North American colonies and helped to form English colonial policy. Furthermore, as the site of the first major transference of English personnel and stock to a foreign shore, the contributions and experiences of its early settlers provided the foundations for many of the enduring social, economic and political ideals of the American nation.

Quickly, the numbers going to America grew: goldsmiths and metallurgists from London were sent to Virginia to search for gold and other precious metals that investors hoped would make them a quick profit. Thus ‘Virginia lotteries’ were set up in London to raise cash for the venture and a Lottery House was built near St Paul’s Cathedral.

Perhaps in the first concerted advertising campaigns in English history, the Virginia Company endeavoured to promote accounts of the riches of the New World to whip up support for their venture and enlist new recruits – without a constant supply of people to cultivate crops, assist in the home and provide skills for the colony, Jamestown would have been doomed to failure.

The Company established a system of indentured servitude to feed the demand for labour. Vagrant children and orphans were swept from the streets, and the poorest families were induced to hand over their children. Londoners’ contrived to get rid of their ‘superfluous multitude’ by transporting idle beggars and those without means of support – though citizens were wont to grumble as taxes were levied to cover the costs.

Once in America, the settlers traded with the native Algonquian tribes for food. Captain John Smith, one of the first leaders of the colony, noted that the Indians were ‘generally covetous of beads…and other trifling Jewels’. Thus, cheap knives, shears, bells and other knick knacks from London shops were offered in exchange for fish, game, corn and even people. Indeed, when a certain Jane Dickenson was kidnapped by the Powhatan in 1622, she was ransomed for a mere 2lbs worth of glass beads.

Though the Virginia Company had hoped to find mineral wealth, and other sources of revenue, the only product to make a profit was tobacco. John Rolfe introduced the new species –Virginia tobacco – to London, and when the first shipment arrived in 1614 Londoners realized that there was money to be made from smoke.

However, though the venture brought freedom and prosperity for some, it caused enslavement for others. The legacy of the successful venture for the English came at a high price for the American Indians and resulted in the destruction of many aspects of their life and culture. This too is raised in the exhibition.

Four hundred years on, what ever might those first 104 boys and men have thought of the way in which America has changed? As Hazel Forsyth, curator of the exhibition stated: ‘Our exhibition, close to the original departure point in 1606, demonstrates the crucial role played by Londoners in the founding of what was to become the United States of America. As the curator, it has been particularly rewarding to see the reaction of Londoners and of American visitors to the exhibition; however this is a story of relevance to us all’.