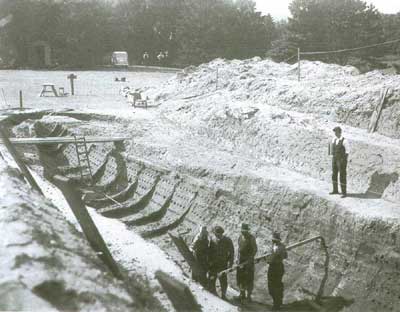 Sutton Hoo revealed
In 1938, Mrs Edith Pretty, owner of the Sutton Hoo estate, invited local archaeologist Basil Brown to excavate a group of low grassy mounds on the edge of a 30m-high bluff above the Deben estuary in Suffolk, England. He dug Mound 2 in his first season, uncovering a robbed-out Anglo-Saxon ship burial. He was then invited to dig Mound 1 the following year. The discovery of rusty lumps of iron again indicated a ship-burial. Brown worked out that traditional excavation methods – trenches through the sides or the middle of the mound – would destroy the ‘ship’, for it consisted of nothing more than lines of small rusty objects (rivets) and stains in the sand. The only way to dig it was to excavate all the spoil from ‘inside’ the ship in order to reconstruct its original form. (Brown was a minor genius – ‘the shipwright of the earth-ship’ in the words of poet Seamus Heaney.) And there was something else: a dark rectangle amidships. The burial chamber was intact. It turned out to contain the richest haul of Anglo-Saxon grave goods in British archaeological history.

Sutton Hoo described
The ship was huge. Built of overlapping planks fixed to a series of curving cross-beams, it had been 27m long and 4m across. Not only its size, but its position at the top of a 30m bluff, to which the ship had been dragged by a large workforce, indicated the status of the deceased. Though he was long gone – his remains destroyed by the acidic sand of the site – the grave-goods in the central chamber revealed his identity. A fine helmet with tinned-bronze relief panels, a shield decorated with golden ornaments, a sword with gold and garnet hilt, and a coat of chain-mail marked him out as a warrior. A bronze bowl, a huge silver dish, a set of silver bowls, and two silver spoons – all Byzantine – showed a man of taste, well connected. Drinking horns, bottles and cups, gaming pieces and a lyre, three bronze hanging-bowls, and various buckets and cauldrons spoke of feasting and drinking in the mead-hall. Above all, a whetstone sceptre with a bronze stag, gold and garnet shoulder-clasps, a great gold buckle, beautifully decorated belt and strap fittings, and a leather purse containing 37 gold coins, each from a different mint in Merovingian Gaul, implied a man of royal rank.

Sutton Hoo explained
Such a rich assemblage of grave-goods afforded a tight date. The man in Mound 1 had been buried in the early 7th century AD. From the Venerable Bede, writing about a hundred years later, we learn that one Raedwald, lord of the Wuffings, ruled as King of East Anglia at this time, and he claimed authority over all the English as bretwalda (over-king). The Wuffings were probably the descendants of invaders from Sweden who had arrived in East Anglia around AD 500. Slowly, among the Anglo-Saxon settlers, a new hierarchy had arisen. A man called Wehha was ‘the first to rule over the East Angles in Britain’, probably around AD 550. He was followed by his son, Wuffa, who gave his name to the dynasty, then by his grandson, Tyttla, and finally, in AD 599, by his great-grandson, Raedwald. Or so it was claimed by the court historians of the early Anglo-Saxon kings. For these men were not born kings; they made themselves kings – by a mix of war, intrigue, diplomacy, and deception. And they legitimised their claims with displays of rich status symbols – ships, armour, weapons, drinking sets, objets d’art, silverware, gold, and much else. The Sutton Hoo ship cemetery was one of the ideological forging-houses of early Medieval kingship in Europe. Here we discover how kings were first made.