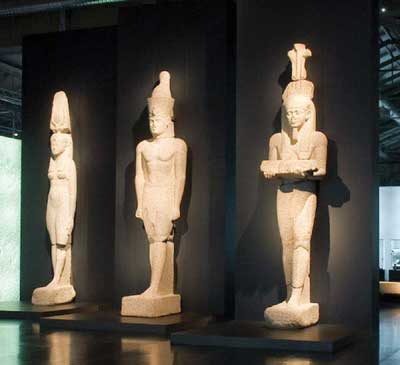 Goddio is a Frenchman and an underwater archaeologist extraordinaire who has been studying underwater remains at two Egyptian sites: in the harbour of Alexandria and in Aboukir Bay where he has been examining the sunken cities of Heracleion-Thonis and Canopus. Aboukir Bay, some 20 miles to the north east of Alexandria, is where Nelson once won a decisive naval victory. There is also an enormous ancient submerged landscape.  Here, Goddio is excavating parts of the eastern suburbs of the notorious city of Canopus and the city of Heracleion-Thonis. Aboukir Bay was the emporium, the official entry port, to Egypt before the foundation of Alexandria and development of its port. It is sometimes called Heracleion, and sometimes Thonis (the Greek and Egyptian names for the same place). The entire western end of the Bay of Aboukir, including the eastern suburbs of Canopus and Heracleion and the harbour of Alexandria, appears to have disappeared under water in the 8th century AD. Goddio’s team has uncovered so much material that a major exhibition, currently on show in Madrid, has been travelling the world.

Franck Goddio was thus able to establish the European Institute of Underwater Archaeology, founded in 1987. But in 2003, he decided that it should link with an established university. Various universities were approached and a beauty contest was held, eventually Oxford won, thanks in part to a splendid presentation by Professor Sir Barry Cunliffe. Thus the Oxford Centre for Maritime Archaeology has been set up, centred in the Institute of Archaeology, but funded by the Hilti Foundation.

Oxford thus becomes one of the first universities where the Archaeology Department is at least partly funded by an external non-governmental body. Damian Robinson has been appointed Director. It has no connection with the former maritime unit based in Oxford.

The conference in Madrid began with a cracking good lecture by Andrew Wilson, the Professor of the Archaeology of the Roman Empire at Oxford, who gave a foretaste of some of the results of the Oxford Roman Economy Project, and looked at the rise and fall of maritime trade from 200 BC to AD 1000.

He began with a discussion of a classic study by Toby Parker in 1992, where he produced a revised graph of all the known Mediterranean shipwrecks from 1500 BC to AD 1500, which now shows a sharp rise to the 1st century AD followed by an equally sharp decline. Ever since 1992, many historians (but not archaeologists) have assumed that a graph of shipwrecks may serve also as a graph of trade in the Mediterranean in this period: but do shipwrecks really equal trade? Or does the graph chiefly reflect the usage of amphorae – transport jars – that are discovered by scuba divers as the most visible markers of ancient shipwrecks? Several different interpretations of the data have been offered, but although the growth in the 3rd and 2nd centuries BC seems to be widely accepted, was there really such a rapid falling off in the 2nd century AD?

Several different explanations were offered. For instance, was there a new ‘container technology’? Pottery amphorae were certainly the containers of choice for wine in the 1st century BC, but the first two centuries AD sees the rise of the barrel. Wine barrels seem to have been invented in northern Europe – there are some fine depictions of wine barrels on the gravestones of some of the wealthy wine shippers on the Rhine, – but wooden barrels leave few remains archaeologically.

Another problem is that the terms of trade may have shifted with southern Gaul becoming less important, and North Africa rising in importance. Certainly, as far as pottery is concerned, the 1st century AD sees the dominance at Rome of red Italian terra sigillata and then Samian ware from Gaul; whereas the 2nd century AD sees the rise of the North African Red Slip wares, which seize the market and predominate in the Western Mediterranean down to the 6th century. Yet, whereas there are lots and lots of scuba divers in France ready to find amphorae that imply shipwrecks, there are fewer scuba divers in North Africa so there is therefore less evidence for trade with North Africa.

The study of stone cargoes is also interesting. A lot of marble was moved around the Mediterranean, but whereas in the 1st century AD, Carrara marbles were the marble of choice, by the 4th century AD marbles from the east Mediterranean were used, as Benjamin Russell demonstrated.

Another major influence in trade lay in the development of harbours. Here, the crucial Roman advance was in the invention of maritime concrete, that is concrete that will set under water. The important ingredient in this is volcanic ash, known as pozzolana, from the Bay of Naples just north of Pompeii, which when mixed with ordinary mortar will set under water. The most spectacular use of this is at Caesarea Maritima in Israel where a huge artificial port was constructed by Herod the Great. Professor John Oleson has set up a Roman Maritime Concrete Project to study this concrete and he estimated that some 52,000 tons of pozzolana must have been brought from Italy to the east Mediterranean, possibly, he suggested, as ballast in the huge wooden grain ships which took corn from Egypt to Rome and which might have welcomed some substantial ballast for their return journey to the eastern Mediterranean. But without the invention of this maritime concrete it would not have been possible to build the harbours on which the huge amount of trade in the Roman empire took place.

Then there were the huge ships that carried grain across the Mediterranean to Rome. These were up to several hundred tons with up to three masts and three decks, but they depended on a number of inventions for their working. How, for instance, do you remove the bilge water that inevitably accumulated? The answer was a rotary chain pump that could remove the water in a continuous stream. Such chain pumps are attested from the late 2nd century BC until the 7th century AD: they are not then known again until the 15th century. But it was such inventions that enabled large ships to transport huge amounts of grain, timber, stone and fish paste all over the Mediterranean.

The conference was being held in Madrid because this is the latest location for the touring exhibition of Franck Goddio’s finds.

Goddio has recovered so much fascinating material off the Egyptian coast that it was decided to hold an exhibition of this material, with the support of the Egyptian government. The exhibition opened in Berlin, has since been to Bonn and to Paris, and has now arrived in Madrid, where it is proving to be a great success (see CWA 28). By the time this magazine goes to press, it will be on its way to Turin and then Yokohama but sadly there are no plans for it to come to London – or indeed to America.

The exhibition was the highlight of the conference. It is being held in downtown Madrid in the former grandiose slaughterhouse, which has now been turned into a very extensive cultural centre. We went round accompanied by Franck Goddio, who talked about some of his numerous finds. The majority of these came from the submerged cities in Aboukir Bay, including three huge statues that originally stood in front of the great temple of Amun-Gereb in Heracleion, and which have been retrieved from the sea and remarkably cleaned. The extent of the discoveries was amazing and we look forward to covering more of the remains in a future issue of Current World Archaeology.