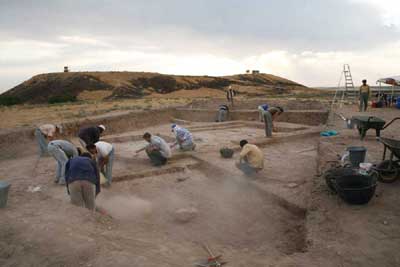 From their heartland in Upper Mesopotamia, an area akin to the northern part of modern Iraq, the Assyrians had built up a rich and relatively powerful empire. However, they wanted more; so, in the 9th century BC, they set forth on a mission of unprecedented expansion – to the north, south, east and west. Their might reached dizzying heights, as they created an empire on a scale hitherto unimaginable.

But how did the Assyrians manage to expand and take so many new areas? Did they simply come ‘down like the wolf on the fold… gleaming in purple and gold’ as Lord Byron famously wrote? Or were other, more complex, processes at work? What do the contemporary texts say? And what does the archaeology reveal about the nature of their domination? For the past 12 years, we have been examining a site at the very northern edge of the Empire: Ziyaret Tepe, in the Upper Tigris region of southeast Turkey.

When, in the 9th century BC, Assyria set itself once more on a programme of outward expansion it ran up against new challenges in every direction that, in every direction, were different. The widely varying topography of the regions surrounding the Assyrian heartland had dictated distinct patterns of state formation which, combined with the equally diverse patterns of indigenous peoples and languages, led to alignments of polities and cultures unique to each area.