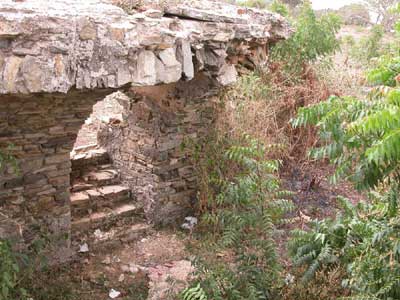 During the period of western colonial empire building, Denmark was a strong power. She held extensive possessions in the North Atlantic – including Greenland and Iceland – and a widespread, if small, tropical empire. The beautiful Caribbean Virgin Islands were Danish from the mid-17th century until 1917, when they were ceded to the United States. In the same period, Denmark held parts of China, India, and Africa. India’s first university, in Calcutta, was founded by Denmark. In West Africa, Denmark held forts, townships and villages on the Gold Coast in the south-eastern part of today’s Ghana, and scattered properties in Togo, Bénin, and even Cameroon, which were Danish from the mid- 17th century until 1850. But what of the archaeology? Recently in Ghana we have found evidence for the first European colonial presence, the plantation of Frederiksnopel.

Frederiksnopel and the peak of the slave trade

Within this setting lies Frederiksnopel, which was founded in 1788 by Paul E. Isert (1756-1789), a medical doctor. He established the plantation in the rainy and fertile Akuapem Hills north of Accra, in present-day Ghana. The doctor had been in Ghana from 1783 and his presence coincided with the final great period of the Atlantic slave trade: when local kings sold millions of humans for exportation to American plantations that produced exotic, and by definition, luxury, goods for Europe.

Isert was a keen observer, something of an early ethnographer, whose reflections are known from many letters. From these missives, we know that one of his ideas was to create plantations or colonies in Africa to make the Atlantic trade superfluous. He had himself participated in a bloody battle, which was a result of the Danish expansion across River Volta. He had also experienced a slave revolt at high sea, which nearly cost him his life. Back in Copenhagen, Isert received permission from the King of Denmark for an initiative, which should produce “sugar, coffee, chocolate and other in Europe so necessary articles”.

His founding of the plantation of Frederiksnopel was undertaken with the support from the local king, who was in fact, Isert’s former comrade-in-arms. However, Isert, his wife, and a new-born child all died soon after; and the first modern farm in Africa southof the Sahara was given up. Rumours about murder circulated due to problems with slave traders and officials, often the same thing, but disease cost many lives in West Africa.

The location of Isert’s plantation is marked on a detailed map of the Danish possessions around 1800, incidentally one of the first accurate maps in this part of the world. However, the exact spot remained unknown.

In 2002, I and a group of Danish and Ghanaian archaeologists searched and found the plantation on a narrow hill covered in bamboo, bushes, and trees. A test excavation revealed a stone foundation for the one end of a long-house, likely the main structure. An old worn track lead us from the local royal palace down into a valley and up onto the hill with the foundation. Towards fields on the other side, we found the rough edge of a terrace and a couple of exits.

We returned to the site in 2004, and cleared the entire hill-top. In so doing, we established that the long-house was never finished. Other structures – likely made of clay and wood – had disappeared long ago. Almost no pot-sherds were found, which helps to indicate a shortlived settlement. However, once we got down to the deepest stones in the foundation, we arrived at a very welcome gift during the very final minutes of digging – a sherd of a small European saucer!

This sherd is from a piece of so-called blue fluted china produced in the royal factory at Copenhagen in about 1785 – an example of the very earliest produced wares where the blue is nearly grey-green. It would be impossible to find a more Danish product, and certainly in deepest Africa.

We pondered: might this have been the saucer of the fine cup of Isert’s wife, broken during the inauguration of the plantation, when the Danish colours were hoisted by the local king? Or, might it have been purposefully broken as an African sacrifice on the same occasion?

Departure – and return – of the Danes

Hitherto, this white-and-blue porcelain sherd is the only Danish find made in Ghana in spite of several excavations, even in Osu, the township at Fort Christiansborg (where Isert had spent time prior to founding the plantation). The Danes and their dependants in Africa seemingly lived for two hundred years in a material world defined not by Denmark, but Great Britain, the Netherlands, or France – and of course, by Africa itself. Thus, globalization started not in, but beyond Europe.

In 1792, the Danish government was the first European state to prohibit trade in slaves (this came into effect from 1803 on). However, the Akuapem-hills were then prone to attacks from the mighty Ashanti nation towards the northwest, near Kumasi. Thus, later Danish plantations were established on the dry coastal plain, near the fortresses. The result was poor harvests. Consequently, this last attempt to forge an income from the Danish possessions, was abortive. In 1850 Denmark therefore sold its Ghanaian possessions to Great Britain for a mere £10,000. The African colonial stage was than left to the greater powers, and ultimately to the politics and problems of today. In this light, Frederiksnopel comes across as a very early, almost experimental, development project.

Today, Denmark has one of the highest donor-rates in the developing world, which includes huge economic, social, and archaeological projects. Though the excavation at Frederiksnopel is but a tiny activity, it adds a compelling addition to the historical record, and adds another archaeological piece to our picture of Ghana’s past.