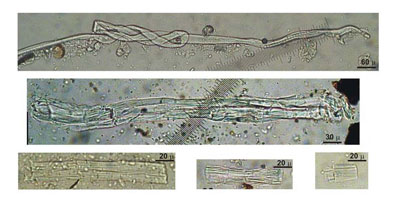 The invention of clothing and textiles ranks, along with the development of agriculture, cooking and ceramics, as one of the keystone events in the development of human culture, an echo of which is found in the biblical account of Adam and Eve, whose loss of innocence and shame at being naked betrays the fact that they have eaten the Forbidden Fruit of the Tree of Knowledge.

Now a team of archaeologists and palaeobiologists say they have discovered what is, for the time being at least, the oldest fibre in the world. More than 34,000 years old, the fibre consists of numerous short lengths of woven flax thread found in soil samples taken from a cave in the Republic of Georgia and identified by Eliso Kvavadze of the Institute of Paleobiology, part of the National Museum of Georgia.

The flax comes from wild plants that grew in the vicinity of the cave and was discovered by accident as part of a project to look for tree pollens that could be used to reconstruct environmental and temperature fluctuations in the Caucasus region, a key point on the migration route for early humans as they travelled from Turkey along the Black Sea’s eastern shores through the Caucasus and west into eastern Europe.

Professor Ofer Bar-Yosef, of Harvard University, who led the cave excavation jointly with Tengiz Meshveliani, of the Georgian State Museum, and Anna Belfer-Cohen, of the Hebrew University, said ‘This was a critical invention for early humans. They might have used this fibre to create clothing, ropes, or baskets – for items that were mainly used for domestic activities’.

Some of the fibres are twisted, indicating that they were possibly used to make yarn to stitch fur or hides together to make clothing or shoes. Remarkably, some of the fibres have been dyed, and are perhaps the remnants of woven cloth, revealing that these Caucasian cave dwellers already had sophisticated textile processing skills.

Previously, the earliest evidence for textile production came from the imprint of fibres found on small clay objects from Dolní Věstonice, in the Czech Republic, dating from 28,000 years ago. Bar-Yosef and his team used radiocarbon dating to ascertain the age of the clay samples in which the fibres were found: fibres were also found in more recent layers, dating from 21,000 to 13,000 years ago.

Bar-Yosef’s team has now completed its 12-year excavation of the cave. ‘Where looking to find out when the cave was occupied, what was the nature of the occupation by those early hunter-gatherers, where did they go hunting and gathering food, what kind of stone tools they used, what kind of bone and antler they made and how they used them . whether they made beads and pendants for body decoration, and so on,’ he says. ‘This was a wonderful surprise, to discover these ancient flax fibres at the end of this excavation project.’