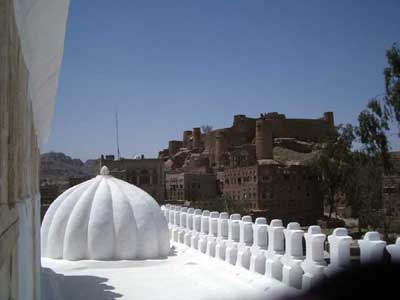 Khaled in Tullo was the first person to mention 11 September 2001 to me. Visitors to his hilltop town numbered in the hundreds everyday before the infamous attack; now, he lamented, there was only the occasional tourist. Yemen has sadly become associated with terrorism, yet the reality, notwithstanding its ubiquitous poverty, is a country of bubbling, friendly people.

I came to attend a seminar organized by Roberto Nardi on the occasion of the opening of the newly restored prayer hall of the Amiriya Madrasa at Radà, three hours’ drive south of Yemen’s capital, Sana’a. Nardi’s team had been commissioned by an international consortium to undertake the painstaking restoration of the glorious frescoes and stuccos which once graced the hall. For nearly three years, working on 45-day rotas, a team of a dozen or so Italians lived in near-isolation in a mudbrick house in a back-street of Radà, making the five minute walk to the ostentatious Amiriya Madrasa alongside the well-preserved medieval castle. I was already familiar with the dedication of Nardi’s team from the Centro di Conservazione di Roma (CCA), but the conditions at Radà were altogether special.

The three-hour drive from Sana’a to Radà traverses a high mountain pass. The sunlight is intense, but, given the altitude at well over two thousand metres, the air is dry. The landscape is vast, with hilltop towns occupying rocky outcrops surrounded by miles of unworked semi-desert. Close to, the towns are gathered around tall castles. The houses themselves are mostly made of mudbrick, and invariably, if old, elegantly finished. The journey is punctuated by road-blocks, as often as not connoting the border between one sheikdom and another. All journeys require visas, so our courier passes out seemingly infinite photocopies of our official permission to go to Radà.

Radà itself was once a great late Medieval centre with a sprawling castle of Caernarvon proportions at its heart. Now, though, much of it is reduced to dereliction, with shattered houses alongside others elegantly curated by attentive owners. Beside the castle stands the Amiriya Madrasa – a huge palatial concept dating to 1504, when, thanks to the profits of Indian Ocean trade taken at Aden, the Sultan Amr bin Abd al Wahab (1489-1517) was able to finance numerous great enterprises. This project for a prayer school included a glorious shrine on its first floor, where the dazzling paintings and astonishing stuccos remained in a tolerable state until modern times.

Since 1982 plans have been made to restore these works to their original, bright vitality. Nardi and his team have done just this. The result is simply astonishing. Entering through an atrium, its mudbrick surface burnished and now painted a glistening white, one encounters a whirl of colours that, like a kaleidoscope, leave one breathlessly tracing images and ideas in the extraordinary artistic geometry. Nothing, absolutely nothing, could contrast more strikingly with the dusty decay of the surrounding streets where the suq (market), in almost every sense, brings to life the kind of townscapes I associate with the end of antiquity. Here are elegant town-houses alongside a smithy, or a taverna of the most rudimentary kind alongside a walled garden. The urban fabric is rich in archaeological detail.

By contrast Tullo, a high-altitude town, still contained within massive medieval defences, has benefited from recent tourism. Here cheerful gangs of children trip gaily along the narrow streets. Once again the architecture conveys the sense of a time when Yemen was wealthy and boasted buildings as grand as Renaissance palaces. This lost age, of course, is best preserved at Sana’a itself where the great medieval and early modern city is almost entirely preserved as a Unesco World Heritage Site. As often as not, World Heritage Sites leave me asking why they were inscribed? What makes the place of value to a global community? Not Sana’a. It is a glorious architectural confection that ranks with Manhattan as one of the greatest achievements of its kind. The seemingly thousands of mudbrick buildings, as often as not with their windows and doors picked out by fresh paint, conjure up all sorts of western experiences – early classical, art deco, post-modernism etc. Yet the effect, transformed by the bubbling existence of a massive suq in the very heart of the old town, like the paintings in the prayer-hall at Radà, transcends all expectations.

Yemen, of course, is not without its grave problems. The most startling, without doubt, is the almost ubiquitous consumption of the mild narcotic, qat. Come 2 o’clock just about every man – and now a growing number of women – begin chewing great bushes of qat leaves.

Very soon, with the unconscious mastication in the mouth, one or other of the cheeks stuffed with the leaves balloons up to appear as if the individual has mumps. On and on they chew all afternoon, resembling goats as their dazed eyes lose any light, until by early evening almost in unison the men spit the leaves out, when in cafes into strategically located cans. Drivers, soldiers, policemen, farmers, coffee-drinkers, barmen, shopkeepers, bellboys – everyone chews. The narcotic is probably harmless enough, but the lethal problem lies in the volume of water it takes to cultivate the qat. According to a visiting U.N. official, the World Bank has told the president that Yemen will exhaust its water resources before 2010 if its men continue to consume qat in such quantities. Given its cultural importance, the palpable poverty and the compelling need to keep the previously well-armed fractious tribes of Yemen calm, the government is in a terrible quandary.

Notwithstanding such issues, Yemen is a remarkable country. Two images are indelible. Its children convey a sense of impish fun, brimming with playfulness and uninhibited. As such it seems a young country. More to the point, it is a welcoming country. As I left Sana’a airport, on a midnight flight, the custom’s officer asked me where I came from. Expecting the worst, I replied a little curtly. He did not notice. ‘Did you like Yemen?’ he enquired. ‘Yes,’ I said cheerily. ‘Then please do think of returning.’ ‘I certainly will,’ I confidently replied as he graciously waved me towards my plane.