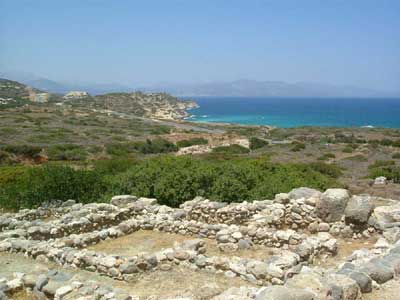 Of the year AD 365, writers such as the sophist Libanius recalled the terrible event of a mighty earthquake that shook the island of Crete. The quake had come from beneath the seas, causing a huge and devastating tsunami to wash over the island. It was just one in a long line of earthquakes to unsettle this most divine of Greek islands. Yet nobody had really considered what effect they may have had on the topography of the island – until 1851, when Captain (later Vice-Admiral) Thomas Abel Brimage Spratt of the Royal Navy visited Crete for surveying purposes, which involved an archaeological exploration of the island. Though never fully acknowledged, it was Spratt who discovered the way in which relative levels of land and sea had changed over the island in historic times. But how did he come to these conclusions? During my study of Spratt, I conducted a thorough search of his original letters, among others, to the geologist, Sir Charles Lyell, held at the University of Edinburgh. These provide fascinating insights into Spratt’s voyage of discovery.

The first letter pertinent to this story was written following a meeting with Lyell, when Spratt wrote to him to clarify a point about the island’s movement:

Dear Sir Charles, Fearing you may be impressed with the idea that the eastern end of Crete had gone down as much as the west. I am induced to write a line to rectify it, if so; and to state that movements in the eastern half of the island have neither been as great nor apparently as uniform as the western movement. Both are subsequent to the historic period and the evidences are in both instances indicated by the elevation or partial submergences of some ancient Greek building or city.

The letter was written on 28 February 1856, which was a Thursday. The two must have met the previous evening because the following day, 29 February 1856, Spratt wrote again to Lyell confirming the situation, perhaps as an afterthought:

My dear Sir Charles, You understood me quite right on Wednesday evening in respect to the fact that the western half of Crete having been elevated, and the eastern half depressed or gone down a few feet.

In the book Crete: Its Past, Present and People (Faber & Faber 1977), author Adam Hopkins wrote that ‘He [Spratt] noted quite correctly, that much of western Crete had risen by a whole eight metres. It was also believed, wrongly, that eastern Crete had sunk by a comparative extent.’ Hopkins does not make it clear as to whom he means by ‘it’ but the above letter (of the 28 February 1856) to Lyell showed that Spratt certainly did not believe this.