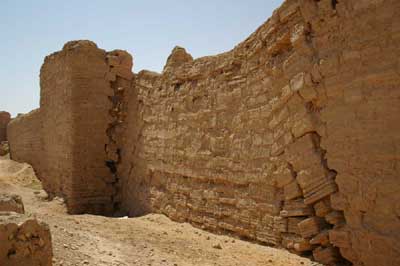 Around the year AD 256, a ferocious siege took place on the Euphrates in eastern Syria. In burning sun on battlements and siege-ramp, and in stifling tunnels dug beneath the defences, Roman and Persian battled for control of an ancient frontier-city. Some of them appear to have suffered an especially gruesome end – in ways we tend to associate more with the trenches of the First World War than with the Classical world.

Europos, an old Macedonian-Greek military colony known to Syrians as Dura, ‘the stronghold’, had become the base for repeated Roman military invasions of the Parthian Empire. Roman aggression – in quest of glory, booty, and territory – proved disastrous, precipitating the collapse of Parthia in the 220s AD and its replacement by the far more dangerous Sasanian Persian Empire, a new superpower spanning modern Iraq, Iran, and beyond.

Around AD 252, the Sasanians invaded Syria, one of Rome’s richest provinces, taking the capital, Antioch, before withdrawing from the region. In response, the Romans massively strengthened the defences of Dura to block the Euphrates road into the province. Probably in AD 256, a Persian army attacked the city, intent on destroying this strategic obstacle to their further designs on Roman territory. The dramatic story of the struggle for the city can be told in detail, but entirely from archaeological remains – there is no ancient written account of what happened. Because the fallen city was abandoned and never reoccupied, the physical remains of the siegeworks, the weapons and equipment employed, and even the bodies of some of the combatants lay undisturbed until their rediscovery by archaeologists more than 1,600 years later.

The bodies in the mine

The grim details of the siege are still being investigated, not least through renewed excavations under Pierre Leriche and his colleagues in the current Franco-Syrian Mission to the site. Such work builds on the publications and unpublished records of the earlier excavators, especially those left by Robert du Mesnil du Buisson, a French army officer and archaeologist who focused on digging the siegeworks during the major Yale-French Academy campaigns of 1928-1937.

My own long involvement with Dura began with the study of arms and armour from the excavations, of which du Mesnil recovered the lion’s share. The harshest but also most fascinating of his discoveries came from a complex of mines excavated in 1932-1933 under Tower 19. This lies north of the main city-gate, on the long wall that faced the principal Sasanian siege-camp across a flat plain, the only side of the city not protected by cliffs. Here, du Mesnil seemed to have found the gruesome ‘holy grail’ of Roman military equipment studies: an entire squad of Roman soldiers who had simply fallen dead where they stood and remained undisturbed with all their equipment ever since.

The more I examined du Mesnil’s drawings and his description of the discovery (there are hardly any photos, and the bodies were neither studied nor kept), the more mysterious it all seemed. Du Mesnil found about 20 bodies in the tunnel, in a tangle covering only a few square metres. How did they come to lie here? And how could so many men have met their deaths in such a small space?

Archaeology works in ways similar to crime-scene forensics. Whether a ‘CSI’ team confronted with the scene of a recent murder, or archaeologists dealing with an ancient site, investigators look for physical clues to try to work out the sequence of events leading up to the deposition of objects and human remains in their final resting-places. Indeed, sometimes the two professions come together completely, when archaeologists help investigate modern murders and war-crime cases; recently they have been involved in excavations of mass graves of victims of Saddam in Iraq. Understanding the mass fatality in the Tower 19 mine-complex at Dura requires just such a ‘CSI’-like approach, examining the positioning and interrelation of the bodies and associated evidence to help unravel how 20 Roman soldiers met their deaths there.