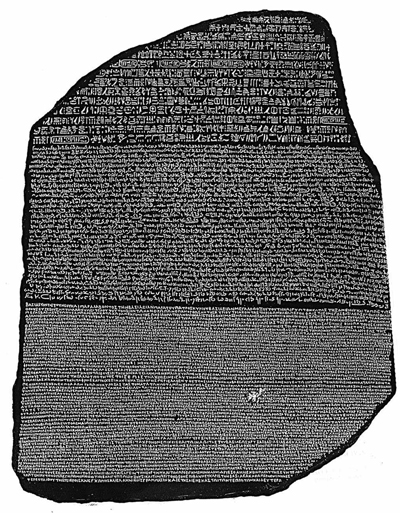 Napoleon invaded and conquered Egypt in 1798, bringing with him a travelling academy of distinguished scholars. Originally displayed within a temple, the Stone was later reused as building material in the construction of a fort at Rashid (Rosetta) in the Nile Delta, and it was here that French soldiers of Napoleon’s army found it in 1799.The same year, the French fleet was defeated by Nelson at the Battle of the Nile. Two years later, the stranded French army was thrown out of Egypt by British forces and, under the terms of the Capitulations of Alexandria, Egyptian antiquities collected by the French passed into British hands – including the Rossetta Stone. In 1802, the Stone was transported to London and deposited in the British Museum, where it has remained ever since.

A full translation of the Greek text appeared in 1803, but it was to be 20 years before the two Egyptian versions, one in hieroglyphics, one in demotic, were deciphered. The three inscriptions had the same meaning. Greek was the language of the court and the ruling class; the pharaoh whose cult was proclaimed by the Stone was the Macedonian ruler Ptolemy V Epiphanes. The other two texts represented the same language – Ancient Egyptian – but in alternative scripts: the hieroglyphics of sacred and monumental inscriptions, and the demotic of everyday usage. The Stone was the key to reading Ancient Egyptian. Because Ancient Greek was known, one of the inscriptions could be read. The other inscriptions could not, yet their meanings were known from the Greek version. In other words, the Stone provided a parallel text from which the grammar, syntax, and vocabulary of Ancient Egyptian might be deduced.

Even so, this took time. First came recognition that the Stone offered three versions of the same text. Then it was realised that the demotic text used phonetic characters to spell out foreign names. Thus, the appearance of the ruler’s name, PTOLEMAIOS, in a cartouche in the Greek version could be matched with cartouches in the demotic version to give the symbols for the sounds P, T, L, M, and S. Next it became clear that the same was true of the hieroglyphic text, and that demotic and hieroglyphs had many other similarities. Finally, it emerged that phonetic characters were used not only to spell out foreign names, but also native Egyptian ones. Many scholars worked on the puzzle, but it was the French schoolteacher Jean-François Champollion who made the decisive breakthrough with his comprehensive table of phonetic signs in 1822. By this time, he was able to post one or more signs in demotic and hieroglyphs against most Greek letters.

Champollion’s decipherment of the Rosetta Stone did more than open the pages of Egyptian history as represented in countless ancient inscriptions. The Egyptian chronological framework provided by lists of pharaohs and their reigns became the basis for dating the entire Eastern Mediterranean archaeological record. The association of objects with dated inscriptions, and then the association of similar objects with other objects elsewhere, made it possible to construct a chronology for the whole of the ancient East.

The Rosetta Stone at a glance

What is it? A broken slab of black granite inscribed in two languages and three scripts
Of what date? 196 BC
What does it say? Proclaims divine cult of new ruler
When was it found? 1799
Who found it? French soldiers
When was it deciphered? 1822
Who deciphered it? Jean-François Champollion