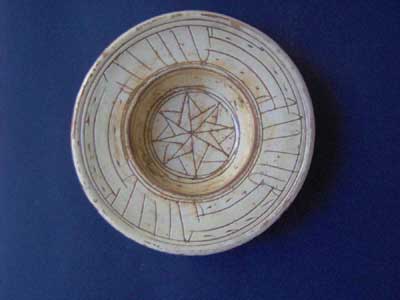 Castelfiorentino, a town in central Tuscany about the same distance from Florence, Pisa and Sienna is a quaint provincial town built on a steep hillside overlooking the valley of the Elsa river. Its narrow Medieval streets descend from the old town hall through the remains of the city walls and down to the banks of the river where our excavation site, Piazza Cavour is located, writes Dr Anna Moore Valeri.

Until the 18th century, porcelain and bone china were not made in Western Europe, and sgraffito and tin-glazed ware (maiolica) were the preferred ceramics for use as table ware. In fact, we know from paintings that a typical Tuscan table of the end of the 16th century would be set with either maiolica or sgraffito plates, or a mix of both, often combined with pewter serving dishes, glass goblets and a maiolica wine jug.

Traditionally, most Tuscan sgraffito has been attributed to workshops in Pisa – indeed there is evidence for its production there from about the middle of the 15th century until the 17th century. However, our excavations revealed that Castelfiorentino was also producing massive amounts of the same type of pottery starting around the beginning of the 16th century at the latest, which may then have been exported from the port of Pisa. It is significant that a similar scenario occurs with the distribution of contemporary tin-glazed maiolica ware – thousands of fragments of vessels known to have been made in the nearby town of Montelupo have been found in Northern Europe, particularly in the UK and in Holland, and these too were exported from Pisa.

Through digging the kiln at Castelfiorentino’s Piazza Cavour, we discovered that the potters specialized in two types of sgraffito: the elegant and costly fondo ribassato in which large sections of the slip are scratched away creating the design in relief, and the cheaper and often rather messy polychrome graffita a punta in which rather hurried sketchy drawings were made by scratching the vessel surface with a fine point and then adding various colours and a transparent glaze before a second firing. They do not seem to have produced the graffita a stecca, a specialty of Pisa, made by scratching whorls and dashes with a broad pointed instrument similar to a pen used for artistic calligraphy.

A large portion of the luxurious fondo ribassato wares have coats of arms on them, many of which it has been possible to identify, like those of the Medici, Pucci, Canacci, Strozzi, Filicaia and Calandri families. The presence of the same coats of arms on many different dishes demonstrates that these families were ordering complete sets. Sgraffito wares were also widely used in monasteries and convents, as is suggested by the numerous religious emblems and symbols like the Holy Monogram (YHS) used by Saint Bernardine of Sienna and the knotted rope or corda francescana, alluding to St Francis of Assisi. Special shapes, like little bowls with broad rims, were part of the monastery sets. In terms of more general decoration, fondo ribassato often includes a foliage motif called the “crab’s claw” on the rim or a “winding ribbon” around a coat of arms or a pinwheel.

The more rudimentary graffita a punta style started being made in Tuscany as soon as the sgraffito typology was introduced there, probably around the middle of the 15th century, and continued to be made until the typology died out completely in the 17th century. During the final stages of production of sgraffito ware in Tuscany, in the mid-17th century, Pisa was producing an extremely popular style decorated with a rather sloppy poppy motif incised in the centre and painted with green and dark red or orange. The total absence of this type of decoration in Castelfiorentino suggests that the kiln was no longer operating in this era.

Like maiolica, all Tuscan sgraffito ware was fired twice. After being thrown on a wheel, the plate was covered with slip and left to dry for a few hours, decorated with the incised motif and then fired for the first time; the product of this first firing, called a biscotto (literally biscuit), was opaque and porous. The biscotto was then covered with a transparent glaze and fired a second time. After the second firing the pottery was glossy, impermeable to liquids, and suitable for use as a table ware. About 85% of the pottery found during the excavation in Piazza Cavour were biscotti which had been discarded after the first firing – usually because they had been over-fired causing them to blacken and/or crack.

A peculiarity of Tuscan sgraffito pottery is that it was made only in open shapes (bowls, dishes and plates) to the total exclusion of closed shapes like jugs, pitchers and albarelli (drug jars). With one quite extraordinary exception – a little cover which was clearly the top of a closed pot or drug jar – the finds from Piazza Cavour confirm this rule. Some of the most interesting finds in Piazza Cavour are the numerous kiln spurs, all of which are made from a mould. This demonstrates a high degree of organization among the potters and is quite unusual for a 16th century kiln – at Pisa for example the kiln spurs were modelled by hand. Many of these spurs have identifying marks, symbols or initials on them. In fact, it is now clear that the kiln was being fired for many different potters who supplied their own firing equipment along with the vessels to be fired. Each potter collected his own spurs after the firing and reused them until they broke. A mould for making the spurs with the initials represents one of the most significant finds from the excavation.

Having investigated the contents of the kiln dump through two stratigraphic units, we decided to dig down to determine the nature of the underlying layers. A few inches below the kiln dump, we identified layers containing glass fragments, slag, and crucible fragments. We also found numerous fragments of both green and blue archaic maiolica, many of which were clearly kiln wasters. These seem to have been deposited in the 14th century context, and in the case of the blue archaic maiolica, probably the last quarter of the century. This material points to the existence of an earlier glass production industry. Beneath this, we identified virgin soil, about 2.3m below the street level.

The city of Castelfiorentino was clearly home to hitherto unknown glass and pottery industries and is helping us to rewrite the story of Italian tableware. We look forward to returning to our excavations next summer ’06, for the city has enthusiastically approved a project to continue the excavation in Piazza Cavour. During our second campaign, we plan to extend the area horizontally to collect more pottery and to determine the exact location of the remains of the kiln, which we suspect might have been partially or totally destroyed by the flood waters of the river Elsa.

The project “Renaissance Ceramics of Tuscany” is organised by the Earthwatch Institute and needs volunteers in 2006 to continue research. For more information, or to get involved, contact + 44 (0) 1865 318831 or visit www.earthwatch.org