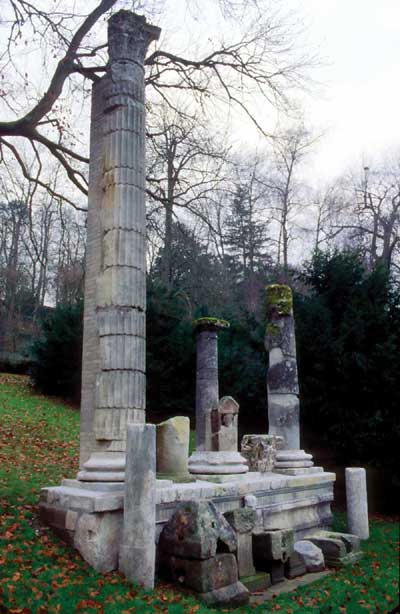 Bourbonne-les-Bains, France, winter 1874/75: for the first time ever, powerful pumps drain the ancient Roman catchment installation of the town’s hot spring. The mineral water with its renowned medical properties, and temperature of 66 degrees centigrade, has made Bourbonne the most visited spa in northern France. As the water is drained, and the soil extracted, artefacts come to light at the bottom of the spring-water shaft, writes Eberhard Sauer. They include Bacchic figures, heads of bronze serpents, brooches, beads, rings and thousands of coins: four are of gold, almost 300 of silver and over 4,000 of copper alloy. It is the largest recorded ancient coin deposit from any spring in Gaul or Germany, even though many coins have been totally destroyed by the salt-rich water and thus could not be counted.

Only now have these coins been analysed in detail. The results are astonishing. Almost 90% of the pieces were struck under the emperor Augustus (27 BC – AD 14) or just before. Nowhere else in the Roman Empire, to my knowledge, have so many coins of this period been found in a single deposit.

How did these pieces all end up in the hot healing spring? Were they a hidden hoard of collected money? Unlikely – the depth and temperature of the water would have made recovery impossible, short of diverting the whole spring. Furthermore, there was a preference for smaller denominations, while the opposite is true for hoards. An unusually large number consisted of copper asses, coins the size of two-pence pieces. These were often even cut in two to create small change. A higher proportion still were quadrantes. This was the smallest denomination in the currency system of the time, as small as a penny coin. Despite there also being some precious metal pieces, most coins represent a deliberate selection of the smallest denominations. We must be dealing with numerous offerings by individuals to the deities thought to preside over the spring. From later inscriptions we know that these were the spring god Borvo and his divine partner Damona. Unlike in Britain, where springs tend to be under the guardianship of goddesses (Sulis Minerva at Bath, Coventina at Carrawburgh and Arnemetia at Buxton), in Gaul and Germany, male gods or divine pairs are more frequent.

How did the custom originate? The veneration of water is deeply rooted in prehistory. Numerous precious items were deposited in European rivers in the Bronze Age and some still in the Iron Age. Throwing coins into springs seems like a natural succession to this ritual: a genuinely Celtic tradition, strong enough to prevail, despite the pragmatic mindset of the Roman invaders? A closer look at the evidence suggests that this assumption is far from the truth. In fact, there are no proven cases of pre- Roman coin offerings in springs in Britain, Gaul or Germany. At Bath there are just 18 Celtic pieces amongst 12,615 coins in total, and they may well have been offered after the conquest. Amongst almost 3,600 identified copper alloy coins from Bourbonne, there is just a single native issue, and this was probably offered at the same time as the Roman pieces. Tree-ring dating has established that a spring near Trier was provided with wooden catchment installations centuries before the Roman conquest, yet the earliest identified of the 309 coins offered was minted under Augustus. Not only coins, but also other Iron Age artefacts are hardly ever found in springs. One of the few exceptions to the rule is provided by an abundant cold source of the Douix at Châtillon-sur-Seine, some 90km west of Bourbonne: here Iron Age brooches have been found, but coin offerings again do not start until after the Roman conquest of Gaul. By contrast, ritual deposition of coins in springs is well attested in Republican and early Imperial Italy: the hot spring of Vicarello near Rome has yielded numerous early coin offerings, and the younger Pliny (Letters 8,8) attests the custom for the Clitumnus spring.

Strange as it may seem, coin offerings in springs in north-west Europe are a Roman import, not a native tradition. And so are spas and the systematic exploitation of hot water. Prior to Rome’s conquest, all hot springs north of the Alps emerged in open air as nature had created them. It was not until the reign of Augustus that their water was used to feed bathhouses for medical cures and leisure. On the basis of the coin evidence, Bourbonne was probably the earliest hot-water spa north of the Alps. (The only potential contender is Wiesbaden in Germany.) Prior to the creation of its stone and concrete catchment installation, Bourbonne’s main spring in marshy surroundings could probably not even have been easily approached. There is thus little doubt that the work on the spring, the construction of the first bath-house and the start of coin deposition occurred at more or less the same time. Little, incidentally, is known about the earliest phase of the bath-house, but it was already built of stone, and contained a large pool and an apse. Significant parts of its remains were destroyed in 1977/78 with little opportunity for archaeological research, to speed up the construction of its modern successor.

The coin evidence suggests that offering started a few years before the turn of the millennium, maybe around 9 BC, give or take two or three years. However, after over 3,000 identified coins had been offered, probably within less than a decade, coin offerings came to an abrupt halt. Coins minted towards the end of the reign of Augustus are virtually absent, countermarks (stamps on coins) frequently used around AD 6 to 14 are only found on a single piece. These and numerous other indications suggest that, after an explosive start of offering in the last decade BC, virtually no coins were offered in the first decade AD. After a gap, coin offering recommenced on a much reduced scale in the later 1st, 2nd and 3rd centuries and beyond.

If we are right in assuming that we are dealing with soldiers, were they withdrawn for a new phase in the Germanic Wars of Augustus? Troops stationed in Gaul may have been needed there, as fighting escalated after the turn of the millennium, culminating in the annihilation of three legions in the ancient Teutoburg forest in AD 9. That no fort or fortress has ever been found near Bourbonne does not disprove that soldiers were here. Troops at the time often appear to have been stationed in re-used hillforts and are difficult to detect. No fort or fortress of Caesar’s Gallic War, other than those associated with the siege of Alésia, has ever been found. Rome’s playing-card shaped forts are an invention made during the Germanic wars of Augustus. The dominant hill, on which the town of Langres is located, next to one of the most important road junctions in Gaul, is a possible location for our military base. There are some potential indications for the presence of soldiers in the area: one of the two intaglios from the spring deposit at Bourbonne displays a military theme. An elaborate mausoleum near Langres, built under Augustus or Tiberius (AD 14-37), depicts Roman weapons and decorations, suggesting that it was built for a veteran.

Further curious indications that those who offered the coins may have felt loyal to their emperor and may have been Italians is offered by the coins themselves. The proportion of coins where the imperial image is mutilated by multiple ritual cuts prior to deposition is 173 times higher amongst the coins offered after Augustus, probably by civilians, than amongst the coins offer under Augustus, probably by soldiers from Italy.

A second hidden piece of evidence for the identity of the dedicators is even more astonishing: one of the most frequent coin types at Bourbonne is an as minted at Nîmes in southern Gaul. It depicts a crocodile chained to a palm tree on the reverse and, on the obverse, the head of Augustus right and that of his general Agrippa (who had died in 12 BC) left. When coins of this type were divided to create small change, they were mostly cut between the two heads, as the line between facilitated division and avoided mutilation of either portrait. Naturally, the same number of left and right halves were created, and one would tend to think they ought to be equally represented amongst the offerings. Not so at Bourbonne: there were only 162 left halves, depicting Agrippa, as opposed to 229 right halves, showing Augustus. Statistical probability calculation indicates that there is only a 1 in 2,431 chance that a random 391 halves selected out of a large pool of left and right halves, would contain so many or more right halves (or a 1 in 1,216 chance of such a preponderance of left or right halves). Some dedicators thus appear to have deliberately selected a half with the image of Augustus, rather one with that of Agrippa. Why might they have done so? If they were Roman citizens and, maybe soldiers, loyalty could have played a part. It is also interesting to note that the Roman author Suetonius (Life of Augustus 57) informs us that people of all classes threw a coin for the sake of Augustus into the Lacus Curtius, a votive shaft at Rome. Maybe those making offerings under Augustus at Bourbonne were familiar with this custom and imitated it far from home? We may never know. The sacred spring at Bourbonne has not given up all of its secrets, but it has provided fascinating insights into the earliest ritual coin offerings north of the Alps, a custom still practised today, and into the origins of bath-houses and spas.