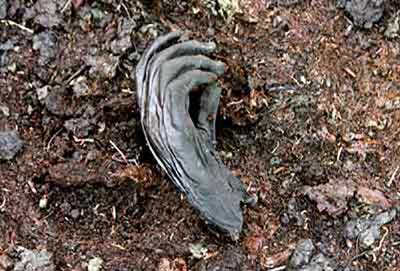 Remains of a teenager, thought to have died in the 1960s, have now been identified as an Iron-Age bog-body.

The remains of the young woman, aged between 16 and 20, were found in 2000 after accidentally being cut into about 100 pieces by a machine harvesting peat from a bog near the western German city of Hanover, Lower Saxony. Police initially suspected the corpse was that of a 16-year-old girl who had been missing since 1969. However, DNA tests revealed it was not the missing girl.

The file was archived and the remains forgotten. That is, until January 2005 when a worker dug up a shrivelled hand near to the previous gruesome discovery. The police were called again.

This summer, they announced that the girl was in fact, in police terms, ‘an archaeological artefact’ dated to around 650 BC.

Experts believe the body, dubbed the Girl of the Uchter Moor, is one of the oldest bog-bodies ever found in northern Europe. Moreover, it is the only extensively preserved human body of that age to be found in Europe north of the Alps.

However, she has suffered at the hands of modern farming technology: ‘During the harvesting of peat for nurseries, the machine’s blades sliced up the ancient girl’s body like a salami. We have 100 parts; around 90 per cent of the skeleton’, said Henning Haßmann, the state archaeologist of Lower Saxony.

Nonetheless, all parts of her body have been found, except for one scapula and two ribs. Even the hair on her head was intact, ‘though we can’t tell if the girl was blonde or black-haired: the peat turns all hair reddish’ explained Haßmann.

Careful analysis of the tissues, bones and hair preserved in the bog will certainly provide insight into the early Iron Age conditions in which the woman lived. Mummies are a storehouse of archaeological information, and mummification occurs naturally in peat bogs thanks to a unique bog chemistry. Soon after the body is deposited in the peat bogs, ubiquitous peat-building Sphagnum moss begins to grow over it. This embeds the body in cold, acid and oxygen-free conditions that immobilizes bacteria, tanning the body.

The Girl of the Uchter Moor has now been moved to the Institute of Legal Medicine at the University of Hamburg-Eppendorf. There she is undergoing close investigation to examine the insides of the corpse. In the first stage, the researchers will be looking for worms and pollen and scanning the skeleton for growth disorders and other anomalies.

The story behind the death is already proving perplexing to the researchers. Forensic analysis has shown that the girl died without any visible sign of force. Surprisingly, it seems that she had ventured deep into the bogs – the nearest path was 2km away. The young woman seems to have hopped from hump to hump – the dry islands covered with heather and stunted trees. Yet this was clearly a highly dangerous strategy: the moor, which covered an area of several square kilometres, would often have been swathed in fog, and death could come easily to anyone who slipped into the hollows between the dry humps.

So did the youngster commit suicide? Was she fleeing from something? Was she gathering food – birds’ eggs, perhaps. Or might she have been a religious woman – or ‘witch’, in the words of the researchers – who used herbs to practice her art and had ventured into the bogs to gather bilberries. The blue fruits have an intoxicating effect, and were used as a drug by the early Germanic tribes. So, we might add, was she simply the original party-girl teen? At this point, explanations are premature and nothing more than conjecture. ‘This body will keep scientists busy for a long time’, said palaeobiologist Andreas Bauerochse.

This is quite a find not least because the last bog body found in Lower Saxony was discovered some 50 years ago; while Tollund Man (c. 100 BC), Europe’s best known bog body, was found in Denmark in 1950.