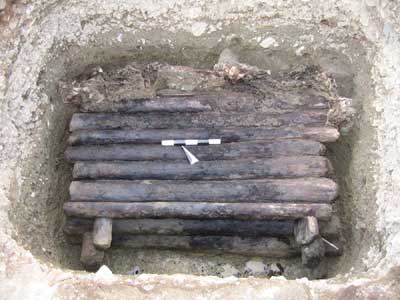 Scholars have recently announced the discovery of a 2,300-year-old mummy of a Scythian warrior found in Mongolia.

The mummy was unearthed in July of this summer in the snow-capped Altai mountains by a team of scientists from Germany, Russia and Mongolia. The body was interred in an intact burial mound, a so-called kurgan, at a height of 2,600m (8,500ft). The lower part of the body and the rear of his head replete with hair have been perfectly preserved.

His burial – high in the icy environment – has been instrumental in preserving the partly mummified body, explained the president of the German Archaeological Institute, Hermann Parzinger. Indeed, even some pieces of the skin on the warrior’s upper body are preserved, and have even been found to be adorned with tattoos. The man was dressed in a fur coat and laid inside a lining of sheep’s wool. The latter have also survived in remarkably good condition. He was also wearing trousers, and a felt cap that had been decorated with wooden carvings of animal figures that had been covered with a thin sheet of metal. His weaponry consisted of an iron dagger, an iron pick-axe with a wooden handle, decorated with blue paint, and a composite bow made of wood with a quiver full of wooden arrows.

Four vessels made of wood and pottery were also found in the burial mound. These were, no doubt, deposited to accompany the man into the next life. The weapons together with the other parts of the inventory of the grave has led archaeologists to suggest the burial was of a warrior of fairly high status.

The man has been identified as belonging to the Pazyryk culture, closely related to the Scythians – a variety of Iranian nomad. Previously, similar 1st millennium graves of nomads had only been found on the Russian side of the Altai, making his burial a novel discovery.

The recovered items are currently in storage in Mongolia’s capital, Ulan Bator. “We hope that future study will help to reveal more of the man’s state of health and indeed the reasons behind his death” said Professor Parzinger.