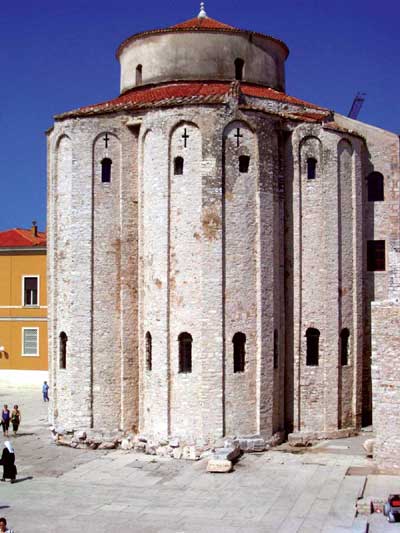 The Ancona hydrofoil arrives in Zadar towards dusk, ploughing through the channel between the low-lying Dalmatian islands. Zadar appears to occupy a barely perceptible shelf above the sea, punctuated by church towers. Its very accessibility has been its undoing. In 1204 the Venetian crusaders paused here in this Byzantine stronghold and then, irrationally, decided to take the town which, with much savagery, they did. Intoxicated with their success, they then sailed to repeat the formula shamefully in Constantinople. In 1945 it was the scene of a terrible aerial bombardment by the Allies; and again in the 1990s the ancient centre was shelled. Somehow, though, it has survived and today evokes a calm mix of antiquity and modernity.

A stone’s throw from the harbour, lies the Roman forum, grouped around which are cafés. Sitting here, looking out westwards to the channel and distant islands, with children haring excitedly around the polished paved expanse, it is easy to feel the continuity of the place. Roman children may not have had battery-operated cars bouncing over the limestone slabs, but I bet they raced in and out of the adjacent shops. The relaxed pleasure of the place is infectious.

For serenity, though, there is St. Donat, the great church erected on the south side of the forum. This is a textbook building. Built upon the spoils taken from the capitoline temple and other Roman buildings, this tall church must have been modelled by its architect on the palatine chapel in Aachen following Donat’s celebrated visit to the Carolingian court. Inside, the conspicuous use of inscriptions and decorated stonework effectively convey the long sense of history in this gracefully arched space. Here is a Byzantine version of a Frankish version of the 6th century Byzantine San Vitale in Ravenna. Donat clearly plundered most of his great blocks from the raised temple at the north end of the forum, beyond a majestic honorific column.

This archaeological ensemble is completed by the severe-looking museum occupying the south side of the forum. Its great halls echo to the sound of the children outside but do little justice to Zadar’s long history. There is strangely little about the formidable Roman colony of Iader that shaped the history of this place. Instead, the top floor features an extra-ordinarily rich display of Balkan prehistory. Its intention, I speculated, was to show how long before the Romans, Byzantines and Venetians, traders were plying the very sealanes the hydrofoil had taken.

A much more attractive museum exists in the coastal town of Nin, ancient Aenona, 15 kilometres to the north. This is a jewel. Nin occupies a point on a deep inlet which in medieval times was strongly fortified. Eventually, given the town’s affluence, it was repeatedly sacked by the Turks before being abandoned. As so often, this paved the way for enterprising archaeological excavations. Tracts of Roman housing next to the minute but elegant 9th century church of the Holy Cross, have been recently excavated. Close by is a major capitoline temple, complete with much of the decorated stonework that in nearby Zadar was robbed for the church of St. Donat. On the shoreline an extensive early medieval inhumation cemetery was recently excavated, providing large amounts of (Frankish) armaments, glassware, ceramics and jewellery. But Nin is becoming known not for these important finds, but the underwater remains discovered at the entrance to the inlet.

Nin museum, it is as well to note, is closed on Sundays when, of course, the little town is full of tourists. But the elegant restored building at the far end of the square provides an engaging tour through the town’s long history – from its prehistoric origins through its phase as a Roman port, then a Dark Age centre, to the later medieval era when, prospering from Adriatic commerce, when life was apparently good, aside from the intermittent attacks by pirates, before the Turks made it untenable. The visitor is treated to a display of the highest Scandinavian standards. Despite the Roman sculpture, the well-presented early medieval archaeology and the imitation Lombard church furniture, pride of place is a High Medieval sewn boat in a specially made gallery. Dalmatia is a yachtsman’s paradise. But few fishing boats appear to be operating any longer. The 11th century example on display in the museum’s longest gallery was one of several extracted from the inlet. Its low-slung profile is barely more than a dug-out canoe, yet this, it seems, was the workhorse of the inner islands and coastal littoral that contributed to making this region so spectacularly rich in Byzantine times.

We returned to Ancona by ferry passing close by the point where the Roman merchantmen at Nin harboured and where, much later, the low-slung boats sunk. The sea was like a mill-pond, so still that the silhouette of Zadar remained pronounced on its slight shelf even an hour’s sail away. At that point, the ferry broke down…