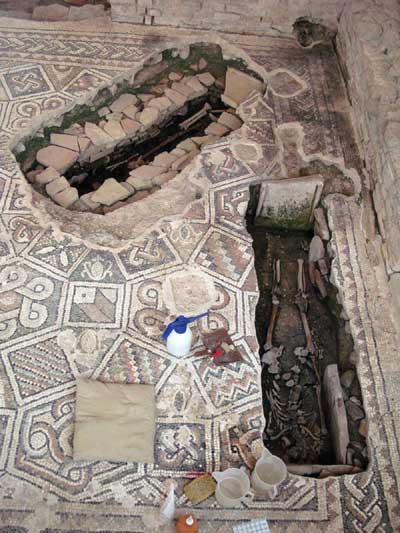 In 1989, routine municipal works were begun on the central gardens of Piazza Ferrari, Rimini. Yet these works proved to be anything but routine: within days, a cache of peculiar metal items came to light. The archaeologists were called, more remains were found, and ten archaeological campaigns were to follow. Over this time, 700 square metres of land were closely investigated and 2,000 years of local history revealed, including the remains of a 2nd century AD Surgeon’s House. The excavations are now complete, housed in a slick protective building, and are a must-see for any archaeology-lover.

Glass-sided site
I was invited to take a tour of the remains with Prof. Jacopo Ortalli, the head of archaeology of the region. The site, like all good archaeological sites, is rather complex: a layer cake of occupation and abandonment, representing different periods and different fortunes over the past two millennia. The archaeologists elected to preserve remains from various eras in order to offer visitors a multi-period view of life in Rimini down the ages.
This is all well and good, but how does the average viewer make sense of such a complex site? Architect Alessandro Colombo was brought on board to design a building to aid interpretation. To do so, he suspended a number of internal walkways above the site. Each walkway marks the boundary of a major building – and by extension the boundary of a different era.
His alluring site museum (pictured on the facing page), which manages to attract even the most uninterested passer-by to gaze in through its glass walls, was opened amid much local fanfare in December 2007.

The Surgeon’s House
As the plan pictured on the previous page indicates, the site is dominated by three ancient buildings: the Surgeon’s House to the north east, a Late Antique palace to the west, and a Byzantine homestead to the north west. Of these structures, the so-called Surgeon’s House was the first to be excavated and has given the whole site its name.
The Surgeon’s House dates from the second half of the 2nd century AD and was built on prime coastal real-estate: at that time it would have faced directly on the Adriatic shore, which is today about 1km further out to sea.
The house seems to have belonged to a doctor of considerable experience and skill, and probably a specialist military surgeon: the cache of metal items found in 1989 consists of about 150 surgical implements, most of which were for use in cases of bone trauma and wounds. This has been lauded as the biggest, most unusual, and most important collection of its type ever found, and includes a unique iron instrument thought to have been used for extracting arrow heads. In addition, the archaeologists discovered mortars, scales and containers, all for the likely preparation and preservation of medicines.
Other interesting finds include a hollow ceramic foot, which would have been filled with hot water and slipped onto a tired or painful foot to offer heat-therapy. While within the garden, excavators found a large marble basin, and the foot of a statue of the Greek Epicurean philosopher Hermarchus, suggesting the doctor’s intellectual leanings towards rational materialism, absence of bodily pain, and freedom from fear.
The house is preserved in an excellent state, for, alas, our kindly doctor’s domus was destroyed by a fire shortly after the mid 3rd century AD. The fire caused the collapse of its roof and then its clay walls. This sealed everything that lay underneath so preserving the remarkable collection of surgical and pharmacological items, and many of the fittings and furnishings. The house would have been entered via a small entrance hall that led into what appears to have been the service area and a patients’ room. Behind that, the doctor’s living quarters were decorated with polychrome frescoes, and a geometric pattern and figure mosaic flooring, including a dining room, bedroom, and two reception rooms, plus various service rooms.
All the above small-finds have been transferred to the neighbouring, newly revamped, Rimini Museum, a former 18th century Jesuit college. Here, one can gawp at the surgeon’s paraphernalia (shown above, left), and also admire reconstructions of the various rooms as they would once have looked. This is particularly illuminating since the careful excavations have revealed evocative details, including small frescos of ships from the walls of the patients’ room, a piece of graffiti mentioning the Greek name, Eutyches, thought to be the surgeon’s name, and a delicate, wall-mounted glass-paste panel adorned with depictions of fish that must have pleased and comforted those who set foot inside this erstwhile sea-side surgery.
Back on site, the archaeologists have left evidence of the calamitous house-destroying fire, including tumble, burnt wood detritus from the roof and a metal grid from a window. This fire is very much integral to the story of the site. It seems that it dates to the time of the raids by Germanic tribes during the reign of the Emperor Gallienus (253-268 AD).
Was the Surgeon’s House deliberately burnt? It seems so, since this house perished at the start of a time of crisis in Rimini, with the years c.250-400 AD, marked by continuous poverty and danger. It is plausible to suggest that the Surgeon’s House, open to the sea, had been unprotected from marauders, and made for easy-pickings. It is telling that after the burning episode, the locals built a new town wall near to the former Surgeon’s House to protect and encircle the town, and that this area was to be completely abandoned for the rest of the ‘crisis’ time.

Rimini’s changing fortunes
Out of crisis, the turn of the 5th century saw improvement. In AD 402, the Emperor Honorius moved his court from Milan to nearby Ravenna. This led to a new lease of life for the towns in the area, and luxurious residences began to be built for the Emperor’s high court officials. One of these, a Late Antique palace, was discovered just bordering the Surgeon’s House. This grand house is replete with ostentatious mosaics and boasts all the must-haves of the rich and comfortable, including underfloor heating, a large reception room, and a garden with nymphaeum fountains and canals. To the modern viewer, the palace appears something of a gilded cage belying the turmoil of the wider world.
Indeed, come the 6th century AD, the palace, too, was destroyed – the likely result of a war in Italy that persisted from 535-553 AD, between the Goths and Byzantine Greeks. During those 18 years, Rimini was taken, lost, re-taken and then re-lost by the two enemies. The palace was soon buried beneath the soil and, until the 7th century, became the location of a small early Christian cemetery. A series of their graves, hacked directly into the mosaic floors of the Late Antique palace, has been preserved in illustration of this event.
Rimini was diving headlong into economic decline. The change in fortunes is exquisitely illustrated at the site. From one side of the suspended walkway, the viewer gazes down onto the opulent palace mosaics; on the other side, muddy darkness glowers. The latter represents the remains of the subsequent 7th-8th century Byzantine house, a relatively basic affair consisting of beaten earth floor and big hearths shoehorned with reused columns and bricks from earlier periods.
Thereafter, we have little settlement evidence for many hundred years, with the next major episode occurring between the 16th and 18th centuries. This is represented by a number of stone wells and corn silos that belonged to the churches of San Patrignano, and the Religious House of the Convertite, a charitable order of nuns who looked after penitent prostitutes.
Finally, as if this stretch of Italy had not suffered enough, we get evidence of its recent turbulent history. Thus, to one side of the Surgeon’s House the ground is smashed in: the result of the 2nd World War bombing campaign, along the so-called ‘Gothic line’ that cut Italy from west coast to east, and more or less decimated Rimini. This, too, the archaeologists have left in place.
So we come into the modern era. Following its war-time devastation, Rimini was rejuvenated by plentiful artless post-war tower block architecture and, despite its attractive historic centre, it gained the reputation of an uninspired old-school beach resort. Certainly, the people of Rimini, reliant on their summer visitors, were not pleased when their central gardens were turned into an archaeological building site for some 20 years. Now, however, the Surgeon’s House site is finally open and, together with the updated museum, Rimini can stride confidently into the 21st century as a must-see for any archaeology-seeking visitor to Italy.