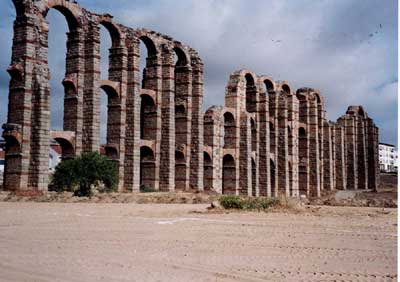 My interest in archaeology was set alight by two years army service at Gibraltar at the end of the 1950s. I was lucky enough to own a relic of the Second World War, in the shape of a 1939 Humber staff car with the balloon tyres from its service in the desert, and was thus able to visit places not seen by anyone except local inhabitants since the start of the Spanish Civil War in 1936, as many were on military land.

Among places I explored with the faithful old Humber were some of Rome’s earliest settlements in this corner of Hispania, such as Carteia, founded in 171 BC on an existing Carthaginian site at the mouth of a small river flowing into the Bay of Gibraltar and Baelo (modem Bolonia), an important fish sauce producing town, also built on a Carthaginian site on the Atlantic coast near Cape Trafalgar. At Carteia, Professor Julio Martinez Santa-Olalla was discovering wonderful things, including some exquisite glass containers still containing the dried up remains of the fish sauce so favoured by the Romans. You could wander at will around the little amphitheatre and a farmhouse which incorporated several Roman columns. Many hours with a spade on the riverbank failed to unearth an signs of the port which had served as Pompeii’s naval base for his unsuccessful campaign against Caesar in 45 BC. Carteia is now surrounded by the huge oil refinery which blights Gibraltar Bay but recently the remains have been carefully excavated and contain fascinating Punic and Roman relics.

In 1958, I was the first person to explore Baelo thoroughly since French archaeologists in the 1930’s and I had a stimulating correspondence with Professor Ian Richmond about this magic place at that time. Today, Baelo has been thoroughly excavated, with the forum, basilica and other buildings, plus, now, a couple of little bars set among the stone fish vats, all overlooking the magnificent curve of beach where the Romans would have drawn up their boats. But in 1958 these stone vats and much else at Baelo were either under a layer of sand or scattered around the site.

Further afield, places such as Italica (modem Santiponce, near Seville) although well known, were little visited in the 1950s and Emerita Augusta (modern Mérida) was still a sleepy little town. Although the main sites of Emerita Augusta have been well documented since at least as far back as Richard Ford in the mid 19th Century, much remained undiscovered at the old capital of Roman Lusitania.

A visit to Mérida in October 2003 allowed a dramatic insight into how much archaeology has advanced in Spain during the last 45 years and particularly since the Juntas – the regional governments – took over archaeology from the Ministry of Education some 20 years ago.

I was very keen to see the monumental remains of the dams and aqueducts via which the Romans brought water to this capital city of 25,000 inhabitants at its peak. It is set in a harsh and often sizzling part of Spain, and some water was drawn from the Anas River ( modem Rio Guadiana). You can see the two, parallel, stone lined and beautifully vaulted underground cisterns into which the river water was filtered just inside the walls of the old Roman castle which overlooks the 792m long and many arched Roman bridge. You enter the cisterns via two stone-block lined channels very similar to massive sewers.

Water – or the lack of it – has always been a problem in the parched lands of central and southern Spain, and even today during the summer months some Spanish daily papers carry a table showing river and reservoir states on the weather forecast page. At Emerita Augusta some use was made of the waters of the Anas River as it washed past the massive Roman river wall with its huge stepped buttresses built to break up the winter floods. The 792m long bridge, a wonder of Roman engineering skill was built with a breakwater, called in Spanish, EI Tajamar, which originally jutted 200m into the direction of the river’s current to deflect the winter spates. Much of this has been washed away by two thousand years of seasonal inundations, but an impressive section remains. Both F.S. Wiseman and Simon Keay believe that this structure also served as mooring quays for vessels using the river. An unusual and well preserved reminder of Roman ingenuity in water storage is the vaulted underground reservoir built within the walls of the Roman – and later Moorish – castle and designed so that river water could filter in to two parallel tanks, one overflowing into the other. The total area is c.7m by 4m and two massive stone lined water channels lead into the beautifully vaulted chambers. Several private houses have similar elaborate underground cisterns.

The Anas River could only provide a fraction of the water needed by the city and the Romans brought nearly all their water via three aqueducts from water catchments in the rolling country to the north and west of the settlement. The most impressive of these is the westerly, which runs from the still-surviving Prosperina Dam, 5km north of modern Mérida, to the castellum aquae in the city outskirts.

However much homework you may have done, nothing prepares you for the sight of the delicate, 500m long, granite built ellipse of the 2000 year old Roman dam, set in beautiful open country. Now a popular fishing spot, you can still see the two square turrets which controlled the sluice gates and in several of the rocky outcrops by the side of the dam you can see the typical, square cut marks where the Romans quarried the stone for this amazing – and amazingly intact – structure. You can also see some of the remains of the overground, stone covered channel which carried the water away from the dam but, sadly, a new Madrid – Badajoz dual carriageway road has destroyed a section of this.

Before the flow of water could reach the city, it had to be carried over the Rio Albarregas, and to achieve this the Romans built a monumental aqueduct, much of which can still be seen striding 827m across the marshy river valley on seventy-three 3m square, stone covered pillars, rising to a maximum height of 25m. The aqueduct is called Los Milagros because the medieval inhabitants of Mérida thought it was a miracle that the pillars remained upright. The sedimentation tank for the aqueduct is on the north bank of the river near the town cemetery and the castellum aquae, with its marble lined sedimentation steps, lies on the outskirts of the modem city on an eminence called El Cerro del Calvary. The Romans built many grand aqueducts in Spain and several dams, but none are grander than the Los Milagros and the Prosperina.

Archaeology is very active in Mérida and while we were there an impressive buttress of the Roman city wall had just been laid bare and work near the Parador was revealing more of the Roman temple on this historic site.

For further reading Professor Simon Keay’s Roman Spain, British Museum Publications 1988, is indispensable. Now out of print, a new edition is due in 2007.

Other out of print books which are well worth reading on Mérida, include F.S Wiseman’s Roman Spain, 1956, G.Bell and Sons, and Richard Ford’s A Handbook for Travellers in Spain, John Murray, which although published in the 19th Century is still a gem and the map of Mérida, with its topographical detail, is as good as anything you will see until you get to the very informative model of Emerita Augusta in Mérida’s superb new museum – one of the best Roman collections in the world.

The Official Guide to Mérida, published by Editorial Everest in La Coruna and written by the Director of the museum, Professor Maria Alvarez Martinez and others is excellent. No one knows more about Emerita Augusta than Professor Martinez and no stone is turned in modern Mérida without him knowing about it.