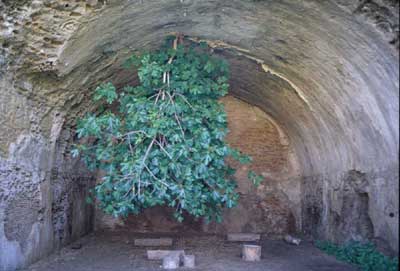 A few miles from Naples, along the old road to Rome, lies a region known as the Campi Flegrei, the Burning Fields, so-called because of the extensive volcanic activity in the area. Seen from above, the surface is pitted with craters, more than 80 of them, both large and small; one, now filled with water, is Lago Averno, on the shores of which, according to Virgil, is the entrance to the Underworld. On the ground fumaroles, gas vents and thermal springs bear witness to the presence of an underground magma chamber ready at any time to burst forth. The last time this occurred was in 1538 when two villages were destroyed and a new mountain was formed.

However, the fiery depths are not always so hostile. On the west coast of the Bay of Pozzuoli stands Baia, now a small, unprepossessing town with a shipyard and a large marina; but once it was the most famous spa resort in the Roman world. The beauty of the location, its mild climate and numerous thermal springs inspired Horace to write: ‘Nullus in orbe sinus Bais praelucet amoenis’ (Nowhere in the world is more agreeable than Baia) while Pliny praised the medicinal qualities of its waters.

Towards the end of the Republic, rich Romans – Julius Caesar, Pompey the Great and Cicero among them – built magnificent villas on this coast, and the later emperors were not slow to follow suit. Claudius published an edict from the Imperial Palace here, Caligula built his famous bridge from Baia to Pozzuoli, Nero built an enormous swimming pool and ordered the murder of his mother who lived nearby, Hadrian died here and Alexander Severus erected a huge thermal baths complex in memory of his mother.

Unfortunately the region also suffers from a phenomenon known as Bradyseism in which the ground alternately rises and falls. The last significant manifestation occurred in the 1980s when the ground rose more than a metre. However, since Roman times, the overall movement has been down; as a result the main elements of Roman Baia now lie under the sea (and can be viewed from a glass-bottomed boat operated by the local tourist authority). In addition, modern housing overlies the lower part of the site. Nevertheless, the structures that remain above ground, excavated mainly in the immediate post-war years, are worth a visit as they give a good insight into how rich Romans spent their leisure time.