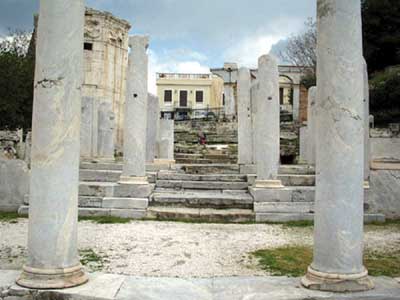 Athens conjures up ancient Greece and the civilisation symbolized by the fastidious re-building of the Parthenon. Yet Athens boasts possibly the most extensive remains of any Roman city in Greece. Why should this matter? Well, for the imperial Romans, Greece was a role model that they sought both to emulate and dominate. With time, too, Greece assumed signal importance as the gateway to immeasurable new territories in the East.

The great significance of Athens was not lost on the architects of the Empire, Julius Caesar and Augustus. Both knew Greece well, so it is not surprising to find tucked behind the Stoa of Attalos – a marvellous reconstruction by the American School at Athens, with a well-presented museum – the Roman Agora planned by Caesar and executed by Augustus. The Agora is a Forum by any other name, squeezed into the pre-existing metropolitan townscape.

Seemingly rectangular, it measures about 111m x 96m and was executed with a finesse worthy of Campania or Latium.

Shops line one side, but it is the exquisitely carved gutters that catch the eye. The Romans, judging by this workmanship, were the equal of the Greeks. Today, overshadowed by the Hellenistic Tower of the Winds – one of the principal landmarks of the Plaka district – it is a serene gem in an otherwise bustling park of tour groups. Close to one side are the public toilets sponsored by Vespasian (the Vespasianae). Entering from the marketplace through an antechamber, the lucky Athenians discovered elegantly raised seats over a deep channel lined with marble. Athens surely touched Vespasian in a way that cold Britain failed to, judging from this simple yet endearing monument to his largesse.

West of the Stoa of Attalos, nestling within the legendary Greek townscape, Roman donors planted their own memorials. Indeed, very much everything in this maze of buildings exposed and studied by the American School is Roman. Perhaps the dominant building was the Odeon erected by Agrippa, Augustus’s admiral who managed the victory over Mark Antony and Cleopatra at Actium.

This unprepossessing monument today, judging by most reconstructions, was an axiomatic feature around which new shrines, temples and offices were steadily interposed into the existing fabric of the marketplace overshadowed, of course, by the Acropolis.

The American School’s excavations on the north perimeter of the Agora reveal what has been removed over the past century or so. Alongside the row of new cafés just beyond the Panathenaic Way are deep urban on-going excavations. Each year dozens of students of classics are trained here in a painstaking programme that has no equal.

Generations of students have tirelessly unearthed a long and largely continuous history extending from later Bronze Age to Medieval times. Like the Forum of Rome, excavated by Giacomo Boni during stupendous campaigns at the start of the twentieth century, the Agora is in fact a modern confection creating a calming open area of ruins as if it were an oasis in the late Ottoman gaggle of densely built-up streets hugging the lower flanks of the Acropolis.

Perhaps in an effort to break with this tradition of re-building continuously on one spot, Hadrian boldly looked to enlarge the city on its south-east side. The Arch of Hadrian frames the Parthenon and as such is a seductive point in the tourist circuit of the city. But the refined lines of the structure bring to mind the Emperor’s architectural experiments at his city-sized villa below Tivoli, close to Rome. In other words, its shape is elegant as opposed to imposing. Yet the arch carries two inscriptions, one facing west reads ‘this is Athens, the ancient city of Theseus’; while the one facing east reads, ‘this is the city of Hadrian and not of Theseus’.

This remarkable text belongs with those of the greatest imperialists and conquerors. Just beyond the arch, to reinforce this image, Hadrian completed the mighty Olympeion, a previously unfinished Doric temple dedicated to the cult of Olympian Zeus, started by the family of the tyrant Peisistratos around 520 BC.

Augustus had attempted to complete the project but a century later Hadrian in AD 131 oversaw its inauguration. Here, in an adventure that plainly set out to rival if not eclipse the Parthenon, Hadrian strove for Olympian status. Of course, Hadrian was not without a benign cultivated side as the library close to the Roman Agora – a severe and fortress like mass in its colonnaded immensity – reminds us.

Built around AD 132, Pausanius refers to it as a wonder of its time, a kind of Library of Congress. Nowhere else are the two sides of this legendary emperor better illustrated. And as if to reinforce this, two portraits, in the unprepossessing room in the National Archaeological Museum reserved for Roman antiquities, make this point handsomely. One shows him as benign and serene; one as a careworn commander who could build a wall to separate Britain from Scotland and crown this engineering feat with an egoistical Olympian vision in the very centre of ancient civilization, Athens.

A day in Roman Athens reminds one forcefully of that archaeological tenet that each civilization in some way or other shapes and forms its successor.