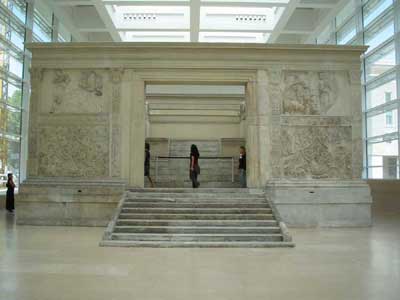 Only in Italy and Greece do ancient monuments seem to summon up political passions. This spring Rome witnessed a furore over the elegant altar to peace, the Ara Pacis, erected by Augustus shortly after becoming emperor. The sitting mayor of Rome, Walter Veltroni, was proud of the new building encasing it; his opponent vehemently threatened that if elected he would tear it down.

Richard Meier’s new building is stunning and allows natural light to illuminate the magnificent late 1st century sculptures that adorn this extraordinary monument. Rome has been bold to challenge the holy cow of making a modern building in its centro storico. Of course, being a great contemporary architect (from New York) Meier’s work took much longer than anyone expected. For example, the opening ceremony took place in October 2005 but no sooner had the luminaries visited it than it was closed until April 2006 for works to be completed.

Meier is not the first architect to have designed a showcase for this great work of art. Famously the Fascist architect, Vittorio Morpugno, made the building that housed the altar until the 1990s.

Morpugno had splendidly responded to Benito Mussolini’s call to aggrandize the capital of Italy in a manner consistent with its past. “All that grew around it in centuries of decadence must disappear,” Mussolini commanded in 1926.

Thenceforth, the Ara Pacis formed part of an extraordinary new square in Rome that must rank as one of the gems of 20th-century town-planning: the Piazza Augusto Imperatore.

The Ara Pacis had originally been constructed a little to the east, on the Via Flaminia as it left the city. However, Morpugno now gave it pride of place beside the Tiber. Next to it, dominating the square, lay the huge circular mausoleum of Augustus.

Around this, Morpugno arranged a piazza of classic modernist buildings.

Mussolini opened Morpugno’s building encasing the Ara Pacis on 23 September 1938. Until the construction of Meier’s new building, it was the most coherent expression of fascist architecture in the centro storico of Rome. Italy, understandably, has ambivalent feelings about Mussolini’s legacy and it is no surprise that until recently this corner of ancient Rome has not received the treatment that it deserves. (Is Rome thus sustaining the Fascist ethos: that Roman building is good and the architecture of the recent past is worthless?) For aside from the Ara Pacis, visitors will not be impressed by the overgrown mausoleum where drug-addicts shoot up or, indeed, the faded fascist wall mosaics on the north flank of the Piazza that remind us of Rome’s roots.

Rome’s greatest citizen and perhaps its most controversial age deserve better. Why, one wonders, wasn’t this included in Meier’s brief? This said, the Ara Pacis is a breath-taking exhibit. On entering, an unobtrusive line of busts reminds the visitor of the great personalities of this turbulent era, made famous by Suetonius’s history. Opposite, but discrete, is a huge family tree. All this is necessary because the great altar to peace belongs to the moment that Augustus brought an end to the strife that first began between Julius Caesar and Pompey, and then between Mark Anthony and himself. Under Augustus, but in no small part due to his svengali, Agrippa, the new colossal territory was being put into harmonious order.

Approaching the altar, the scenes depict the Augustan need for ancestry. To the right, much damaged, are Romulus and Remus. To the left Aeneas making a sacrifice, celebrating his arrival in Italy. Mussolini’s need for ideological ancestry took its lead from this great master two thousand years earlier. On either side are breathtaking panels depicting processions: that on the north (Lungotevere) side are priests, cult attendants and magistrates, figures within Rome’s civil society.

Historians have identified many of the elegantly carved figures as images of those who took part in the ceremony of 4 July 13 BC that celebrated Augustus’s return from settling unrest in Gaul and Spain. The south frieze (now opposite Augustus’ mausoleum) is a collage of the great figures of the Augustan family. Augustus himself is shown, as is Agrippa – both veiled and slightly turning to the viewer. Women and children of the household are present too, as if to lay emphasis upon the twin forces now bringing stability to Rome and its people.

The genius of the sculptor of this great frieze is best seen by carefully investigating the vegetal segments. At first sight these elegant parts of the great monument look impressive. The scroll work and plasticity show a master working closely from nature. But further inspection reveals the sculptor’s humour. Hidden in amongst the branches and acanthus leaves are lizards, snails, scorpions and a host of other creatures.

It is difficult now to imagine that the reason this altar can be viewed today – much like the celebrated Actium monument recently discovered above Nicopolis in northern Greece – is because of the work of a magnificent conservator. More than a thousand fragments of every shape and size were found during excavations in 1903 and in later digs under Giuseppe Moretti’s direction in 1937-38.

If there is one defect of this new exhibition of the Ara Pacis, it is that it honours the New York architect, but fails to explain how the archaeologists reinvented this great work of art at the behest of, first Mussolini, and then his successors.

They too deserve a place in the pantheon of Roman archaeology.