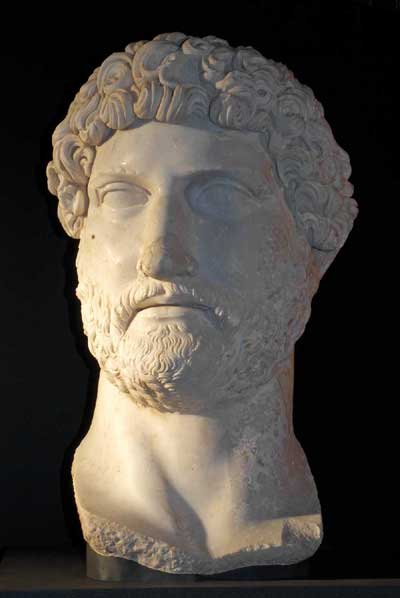 The new British Museum exhibition Hadrian: Empire and Conflict is clearly a big success: but who was Hadrian? The subtitle of the exhibition, Empire and Conflict, is surely ambiguous. It is fashionable today to see Rome as being a military dictatorship, ‘perpetrators of extreme violence and destruction’, with the implication that every emperor must have been involved in conflict. But how far is this true of Hadrian? Was he essentially a warmonger and a man of conflict? Or was he, on the other hand, an Empire builder, an administrator who established the pax Romana? Which side was Hadrian on?

Hadrian (117-138 AD) was the second most important Roman emperor after Augustus, and indeed the second of the four emperors who formed Rome’s golden age in the 2nd century AD. Like Augustus, Hadrian established, or re-established, many of the principles on which Rome’s success depended. But, like Augustus, Hadrian was essentially a manager rather than a fighter, and one of the first things he did was to draw back from some of his predecessor’s conquests, notably in Iraq. The major conflict in his reign was suppression of the Jewish Revolt in 130-136 AD.

The Jews of Cyrene and other cities had already rebelled against Roman rule at the end of Trajan’s reign. Now, at the end of his own reign, Hadrian suppressed their next uprising. This revolt is illustrated in the exhibition by a number of small items from the so-called Cave of Letters, excavated in the 1960s, where a number of the rebels sought refuge. Among the exhibits is a letter from Simon bar Kokhba, the leader of the revolt, showing him in somewhat testy mode, threatening severe punishments to those who disobeyed him: ‘any man from Teko’an who is found with you, the houses in which they dwell will be burned, and you too will be punished’. There is also a set of keys which they brought with them from the homes to which they would never return. But there is also a fine glass bowl showing that despite the difficulties, they were able to bring a certain number of valuables with them and hauled them up to the almost inaccessible cave.

One of his principal achievements was to fix the boundaries of the Roman Empire notably by building the wall across Northern England that bears his name. But it is difficult to do much about frontiers in an exhibition like this: the most interesting display for me was that of the three souvenir cups known from Hadrian’s Wall, the Rudge cup from Alnwick Castle, the Moorlands pan now in the British Museum and the Amiens skillet from France, all of which have inscriptions referring to the wall: all were much smaller than I had thought them to be.

Certainly, Hadrian had a passion for building and for architecture. A surprise exhibit was some pilaster capitals from the Pantheon in Rome which had been rescued and brought to the British Museum when the Pantheon was being restored in 1747. It was particularly appropriate that the exhibition is held in the former Reading room of the British Museum, which in itself was modelled on the Pantheon, and is only a couple of feet smaller in diameter than the original.

The exhibition is dominated by statues of Hadrian, his family, friends and colleagues. The highlight is the huge new statue recently discovered at Sagalossos in Turkey and never before put on display. Also on show is the famous statue discovered in Cyrene in 1867, and currently held in the British Museum, which appears to show him in Greek dress. Indeed, Hadrian was a hellenophile – and was known as Graeculus, the little Greek. However, a detailed re-examination of this statue has shown that the original restorers put the wrong head on the wrong body: Hadrian was not quite as Greek as had been made out.

A statue of his wife Sabina is also on display. But this was a diplomatic marriage, his real passion was for his boyfriend Antinous, who drowned in the Nile and whom he attempted to make into a god. The Romans were scandalised, not because Hadrian was homosexual but because he attempted to make his boyfriend into a god. The exhibition includes a famous bust, once thought to be of Antinous, but now thought to be a copy of a head of Hermes dating from the 4th century BC. The exhibition is also accompanied by an exhibition tome (sadly not a catalogue) by the curator Thorsten Opper.

We attended the opening ceremony, which was dominated by a virtuoso performance by Boris Johnson, the Mayor of London, who began with a rendition in Latin, and went on to a dazzling exhibition of wit and oratory. Ultimately, I felt that the exhibition presents Hadrian as a superb business manager, but it is an interesting and stimulating exhibition, and a great achievement for its curator.