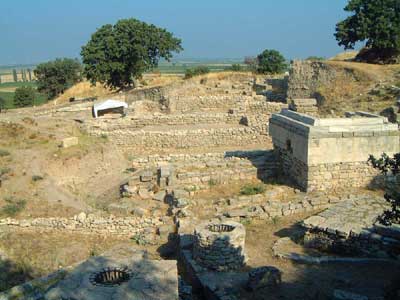 Prof. Brian Rose is the curator-in-charge of the Mediterranean Section at Penn Museum. Here he takes us to Troy in North West Turkey, a site he has been excavating for the past 20 years.

I happened to be at the right place at the right time, and who could resist the iconic site of Troy? It is located at one of the easiest crossing points between continental Asia and Europe, and witnessed a series of wars between East and West throughout antiquity.

What is there left to excavate at Troy?

Troy has been the focus of fieldwork off and on since 1870, but generally with the objective of assessing the historical validity of the Homeric tradition. The ‘new’ excavations that I began with my colleague, the late Manfred Korfmann, have focused on a comprehensive examination of the site, from around 3,000 BC to the present. We also surveyed the surrounding area, making extensive use of remote sensing (radar, magnetometry).

I have also concentrated on the domestic, sacred, and civic areas, such as the Roman houses in the ‘Lower City’, the agora or marketplace, and the sanctuaries of Athena and Cybele, an Anatolian fertility goddess. In the course of this work, we uncovered a large number of terracotta figures of Cybele, the painted wall of a temple, and casting pits for pieces of a bronze statue.

Which museum can readers visit to see such finds?

All of our discoveries go to the archaeological museum in the city of Çanakkale, a 25 minute drive from the site of Troy.

There is a colossal wooden horse with a hollow interior at the entrance to the site, intended to recall Troy’s Homeric heritage. The staff consistently appropriated the horse’s interior for secret parties at night, in an unusual modification of its original function during the Trojan War.

The massive stone fortification walls of the late Bronze Age city (c.15th-13th centuries BC). These will give the visitor an unusually clear sense of the settlement’s enormous defences during a period of continual conflict.

…And what place should we avoid at the site?

The inside of the colossal wooden horse.

What plans are afoot for Troy?

We have developed a plan for long term maintenance and conservation at the site, and the entire surrounding area has been designated as a National Park. This will prevent the remains of ancient settlements in the vicinity of Troy from being destroyed during subsequent development activities.

What do you think might still be hidden at the site?

We have always assumed that there is an aristocratic cemetery of late Bronze Age date that still remains to be discovered. This would enable us to answer a host of questions about war and society at Troy during the 14th and 13th centuries BC. Remote sensing should have detected its location, but it continues to elude us.

Also, when the Persian king Xerxes visited the site in 480 BC, he reportedly sacrificed 1,000 oxen to Athena, which he then used to feed his army. The pit in which those bones were discarded should be somewhere at the site, but we have never been able to locate it. So, there is still much to do at Troy!