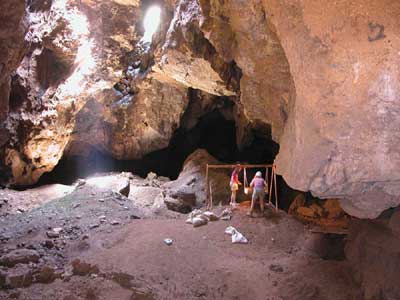 We have been digging at sites in Orce and Cueva Victoria in South East Spain that have revealed the oldest evidence of humans in Western Europe. The rich archaeological and palaeontological record comes thanks to the special geology of the area. This is largely the result of ancient tectonic movements: about six million years ago, the Mediterranean Sea drew back and left an isolated saline lake system – marked Baza Lake on the map – that encompassed over 1500km. Thereafter, lake and fluvial deposits accumulated in the lake’s basin, until around 400,000 years ago when tectonic movements connected Baza Lake with the Guadalquivir valley. Today, a massive 600m of sediment has built up in the area creating one of Europe’s best sedimentary and palaeontological records of the past 6 million years. However, it is the period between 2 and 1 million years that is a key time to unlocking the secrets of the first human dispersion out of Africa.

Orce has two main canyons that cut Baza’s palaeolake deposits. One of them, the Velez canyon, where our work has focused, is located near the shore of the palaeolake and is the ideal place to find mammal fossils. Indeed, we do not find mammal bones or stone tools in the central or deep areas of fossil lakes, but always near the shores where the fauna lived and, more to the point, died.

In 2001, we linked up with the charity Earthwatch and set up a project entitled ‘Early Man in Spain’ that has supplied us with funding and bands of volunteers. Our project has concentrated on five quarry sites located at different stratigraphic levels in the Velez Canyon. Starting with the oldest and moving to the youngest, we investigated Fuentenueva 1 (during 2002), Barranco del Paso (in 1991), Venta Micena (in 1982), Barranco León 5 (in 1995) and Fuentenueva 3 (also in 1995).

We found evidence of human presence at the last three sites – the minimum estimated age for the sites is 1.3 million years for Venta Micena, 1.25 million years for Barranco León-5, and 1.2 million years for Fuentenueva-3. Evidence of our ancestors comprised fragmentary human fossil bones – a piece of an infant’s skull that included two parietal and the occipital bones, two humeral fragments and part of a molar. We also found hundreds of Oldowan-type tools made of flint or quartzite. Indeed, at the Barranco León we found over 100 tools surrounding the remains of an hippopotamus.

As readers will be aware, the Oldowan mode of production is the earliest of all human-made tools and was produced by our first stone-tool making relative, the handy-man, or Homo habilis. Homo habilis had leapt forward in terms of cultural and social progress: along side an increase of their brain capacity, they produced stone tools, and began to eat a different diet – one that seems to have included more meat (a diet seemingly comprising around 30% meat and 70% grains, vegetables and fruits). Moreover, Homo habilis was our first ancestor to move out of Africa.

Fuentenueva-3 was a particularly fruitful site, and we discovered many simple tools often represented by flakes and related cores. With these basic flakes it would have been possible for our ancestors to cut up the remains of large mammals such as hippos, elephants or horses. They would then have taken the meat to safe areas away from any threat from hyenas or sabre tooth tigers. We also discovered broken bones scored with cut marks made by stone tools. In addition, we noted the presence of limestone blocks (1-2kg) that come from the nearby Sierra de Orce. We think such blocks were transported to the site and used to break bones to obtain the marrow. Through digging these sites, we are beginning to build up a picture of the lives of the first human settlers in Spain, and the way they adapted to their new landscape.

Cueva Victoria, is near the Mediterranean coast, in the San Gines mountain close of the town of El Estrecho de San Gines in the Murcia region. It is a huge cave – with over 3km of galleries. Part of this cave was literally filled with sediment and mammal bones during Early Pleistocene times. Over 60 different species of vertebrates have been identified in this site including fragmentary human remains of a similar age to those in Orce region. The fossils are distributed in different rooms and galleries. The sediment rich in fossil once filled the whole cave but mining activity at the beginning of the 20th century removed most of this, and it can now only be found in the walls and ceiling of the cavity. Some of these deposits are also now found on the floor, but in a secondary position, mixed with large blocks of mined material.

So how did our ancestors – and other beasts – get to Spain? We are proposing a migration across the Strait of Gibraltar from Africa into Spain during the Early Pleistocene. And it seems this traffic was two-way, with some European species – such as the bear Ursus etruscus – migrating down to Africa.

During that time, the tectonic activity between the African and Iberian plates would have meant that some Quaternary beaches would have been raised more than 100m in some places. Although we are yet to have a detailed palaeogeography of the Straits of Gibraltar, the movement of different animal types suggests favourable conditions for migration occurred during the Early Pleistocene. Since we were joined by other animals, it cannot be claimed that it was simply our special intelligence that allowed our handy-man ancestor to migrate, though of course this will have helped us on our journey.

This is the first time that such a route across the Straits from Africa and into Spain has been proposed. We consider that the new palaeontological and archaeological data presented above support the hypothesis for this passage of migration from Africa to Europe in the Early Pleistocene. These migrations should be contemporaneous to other, potentially more famous, routes of migration known to have occurred from Africa to the Levant corridor to the south Caucasus, or on towards Java in the East. Thus our work on the sites in South East Spain is adding whole new pieces to the jigsaw of our early past.