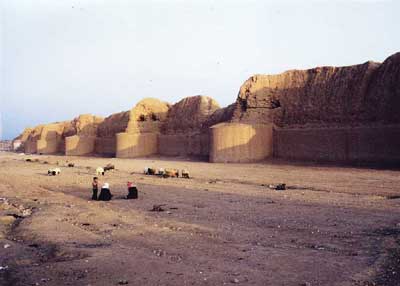 Raqqa’s origin probably goes back to the 3rd century BC with the foundation of a Hellenistic city usually identified as Nikephorion. It was enlarged by Seleucus II Kallinikos (246-226 BC) and then renamed Kallinikos/Callinicum after him.

Having been destroyed in the 6th century, Callinicum was rebuilt by the Emperor Justinian (AD 527-565). It formed part of the fortification of the Byzantine border along the Euphrates. Callinicum was then overcome in AD 639/640 by the Muslim army under ‘Iyad b. Ghanm and given the Arabic name al-Raqqa.

But little is known of ancient Raqqa, for in the 20th century it was partly built over by a new modern city. Almost nothing can now be recovered of either the Classical or the Byzantine city.

However all is not lost, for to the north, the Caliph laid out his palaces, the plans of which can be defined using satellite imagery. The Syrian archaeologist Nasib Salibi and the German archaeologist Michele Meinecke located several of them; subsequently a team from Nottingham University defined the full complexity of the settlement. Taken together the medieval landscape belonging to the time of Harun al Rashid appears to form the largest early Islamic landscape west of Baghdad in the 9th century.

During Henderson’s first season in 1992 excavating with the German team, he struck lucky. Digging down from the location where the furnace fragment had been discovered, he immediately came upon a furnace. He decided to extend the trench, and by 1996 had defined the whole complex: a room with the remains of four glass furnaces, one in each corner, complete with annealing chambers for finishing the glass. The workshop had been built within one room of an earlier (Islamic) hypocaust system. There was also evidence, on a massive scale, for another part of glass production: tank furnace fragments showing that raw glass had been fused there. None of these was actually found complete, but the discovery of debris weighing about 10 metric tons shows that several must have been in operation in the vicinity in the 9th century and later. Glass making has two, if not three, different processes. To start with, the raw glass is made from crushed quartz and a flux [which reduces the melting temperature] in huge tank furnaces. Upon the furnace floors, these basic materials are reduced to slabs of raw glass. The raw glass is then hacked out of the tank furnaces, placed in a crucible, and reheated in the other, beehive-shaped, furnace. It is then removed and blown, or sometimes cast, into a range of vessel shapes.

On the site, we see an interesting stage in the evolution of glass technology. Glass is made from silica – essentially crushed quartz or quartz sand – and a flux. The earliest glass, in the Bronze Age, used the ashes of plants such as of the genus Salsola. Then, in the Iron Age, a new flux was discovered: natron, a salt that is found naturally in evaporite deposits in Egypt. This produced a very high quality glass that often had a blue-green tinge and this was immensely popular in the classical world, especially following the invention of glass blowing in the 1st century BC. However, natron only occurs in limited places. By the 9th century either natron became less available – or its quality declined.

This meant that glassmakers needed even more of the most expensive raw material, fuel, to fire up their furnaces. So in order to address this problem glass-makers returned to a plant-based flux. And this transition and wholesale adoption of plant ash is what happens at Raqqa. This was in effect a new technique and formed part of a broader experimental and innovative phase in Islamic technology.

By 2000 Julian Henderson and his team were making a detailed examination of the total medieval landscape using satellite imagery and geographic information systems. Thanks to funding from the Arts and Humanities Research Council, and in collaboration with Keith Challis of Birmingham University, they were able to define a road connecting most of the sites, clay winning pits, a protective wall to the north and the possible site of the Islamic caravanserai where traders would have stayed – perhaps while selecting the products made in Raqqa. Indeed, a market, the Suq Hisham, was located within the industrial complex and presumably sold the products made there.

For not only was glass produced in the industrial complex in Raqqa, so was pottery. And in particular, glazed pottery – the glassy material used for glazes are essentially the same as for the production of glasses.

Half a mile east of the glass-production area, at the other end of the industrial complex, the Nottingham team discovered and excavated several 9th century pottery workshops. Their main products were unglazed pottery with delicate profiles and intricately moulded decoration. Several rectangular kilns were found, with elaborate structures allowing the draught to rise from below-ground firing boxes to the firing chambers above ground. It has been estimated that the floors of the fire boxes were about 3m below ground and the roofs of the kilns between 2 and 3m above ground. It is even possible to hazard a guess as to the individuals who worked the kilns since two burials were discovered adjacent to the workshops. The skeletons lay on two different orientations. One was positioned east-west and therefore presumably Christian, the other oriented north-east/south-west, so facing Mecca, and thus implying a Muslim. Are we seeing here a cosmopolitan melting pot with Christian and Muslim craftsmen brought together from across the Empire to produce fine commodities? Being close to the Byzantine border, Raqqa would have been a natural meeting place for Christians and Muslims.

Returning to the people who made the vessels, the team have also discovered the homes they might have occupied. Just adjacent to the glass workshop, the archaeologists excavated a number of houses. Although not much remained of these dwelling places, wells were excavated, as were the bases of plastered walls that had been decorated with yellow, red and black paints. It is certainly reasonable to suppose that, owing to their location, these houses were occupied by the glass makers and glass workers. The archaeologists also foundlarge deposits of discarded copper-based coins in latrine deposits. Why chuck money down the drain? Historian and numismatist Stephan Heidemann suggests that the dumping of such large numbers was due not only to their low value but also because they were discarded at the end of the caliph’s reign.

At the height of its prosperity in the 8th and 9th centuries, Raqqa was one of the most flourishing and vibrant cities in the world. In the 10th century, however, the industrial complex waned, though the city became famous as a religious and scholarly centre, with a bishop residing there until the 12th century and boasting four Christian monasteries. During the 11th and 12th centuries it revived again under the Zengids based in Aleppo. But it was destroyed in the 13th century by the Monguls.

As a consequence, Raqqa became largely forgotten. It is only now, that with the full archaeological, historical scientific and environmental investigation of the industries at Raqqa that we can begin to appreciate how its glass and pottery manufacturers have impacted on our world. While glass and ceramic production still occur in Syria, modern potters and glassmakers owe a lot to the pioneering experiments and innovative spirit of ancient Islamic artisans operating in one of the most sophisticated and advanced societies in the world at that time.