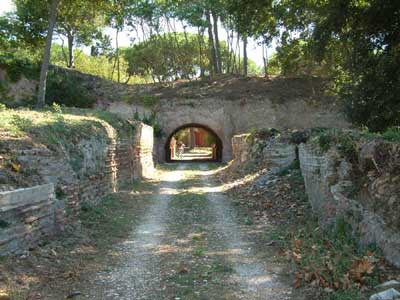 Most people, when they visit Rome, also go on to visit Ostia, the port of Rome. Here they admire the huge warehouses and the meeting rooms of the various guilds of shippers of mid imperial date and they see the Forum and the Capitoline temple, which goes back to the 4th century BC. Ostia has been extensively excavated and makes a superb visitor site. There was however one major problem with Ostia: it was not a good port.

The trouble was that it was essentially a ‘river port’, built on the banks of the River Tiber. As long as Rome was a small or even a medium sized city, Ostia served it well. But once Rome became a mega city and relied on the mass importation of grain from Egypt and North Africa, problems arose. Firstly the mouth of the river has notorious currents and it is very difficult to get into the Tiber, while river silting was a continuous issue. Secondly, the Tiber is essentially a small river, and it simply was not big enough to accommodate the huge 300 ton mega ships that carried the annona (the grain supplies) from Egypt to Rome. Something had to be done. The answer was to create an artificial harbour, 3 kilometres to the north, known as Portus, a generic name which has given us the word ‘port’ in the English language.

The hexagonal harbour still survives today, restored in the 1920s as an open area of water. It can be spotted from the windows of the planes coming in to land at Rome’s Fiumicino airport – if only you know where to look. However unlike Ostia, it is little developed and there has been little for the visitor to see. The area has two big land owners; to the south it is owned by the State which has made part of it into an archaeological park; to the north it forms part of the Villa Torlonia, the pleasure gardens of the Duke Sforza Cesarini.

Furthermore there is always the threat of redevelopment; Rome’s Fiumicino airport lies along the ancient sea shore – so that the margins of the outer Claudian harbour were lost in its construction in the 1960s. Thus the Superintendent of Archaeology for Ostia and Portus, noting the wizardry that Simon Keay (University of Southampton) and Martin Millett (University of Cambridge) in conjunction with the British School at Rome had displayed in their geophysical surveys of towns in the area to the north of Rome – notably at Falerii Novi where the entire town plan was revealed as if by magic – called them in to exercise their expertise on Portus. How far could the architecture be defined, and which areas were most important to preserve?

How far can the plan of this Claudian harbour be reconstructed? Around AD 42 a site was chosen, a flat area where the Tiber swings to the south behind the coastal dunes and which lay 3km north of the mouth of the Tiber. A large area of the ancient coastline was excavated out, enclosing walls were constructed, and then the sea was let in to create a huge basin. This was further enlarged by extending two artificial banks out to sea. These curved round to meet, with the mouth to the west. A large lighthouse was built at the opening to the harbour – a monument which clearly would have echoed that at Alexandria. A huge boat was requisitioned – apparently one that had been specially constructed by the Emperor Gaius, about 10 years earlier, to bring back to Rome the Obelisk that he erected in the Vatican Circus. This was filled with Pozzolana cement and then sunk probably just in front of the entrance, to form an island on which the lighthouse was erected; it consisted of three concrete drums as high as towers, modelled on the structure at Alexandria. At night, a light burned to guide the ships in. The harbour was opened with some ceremony in AD 64, by which time Claudius had died and been succeeded by Nero: special coins were minted to celebrate the opening.

There were also canals. The famous inscription suggested that the canals, to prevent flooding in the city of Rome, were an important part of the project; but where were they? The major canal, known today as the Fossa Traiana has been shown to have been misnamed – at least in its original form it was clearly built as part of the Claudian installations. It was some 30m wide, providing a substantial channel for shipping, enabling barges to carry transhipped grain from the harbour across to the Tiber and thence up to Rome. However, a new discovery to the north was made through geophysical work: a second canal which was for drainage and communication during the construction of the port.

To a ship sailing into the harbour, entry should have been easy. At the entrance to the harbour was the Pharos, the lighthouse; but on the other side of the harbour there may have been another small lighthouse. This is marked as structure 8.15 on the plan, and was revealed by geophysics as a large circular feature. It aligns with the presumed position of the lighthouse at the harbour entrance: was this second lighthouse aligned with the first for a safe entry to the port?

The new harbour was designed to be a grandiose structure. The most imposing buildings were on the far side of the entrance, where they would be seen by a ship arriving in harbour. This is the north-eastern side on Keay and Millet’s map. At the centre was a rectangular structure that was presumably a temple. Earlier accounts said it was a circular temple, but geophysics revealed only rectangular structures, and an early inscription suggests a dedication to the old Italic god, Liber Pater. On either side there were double rows of warehouses presumably forming a grand façade. On the north side of the harbour there was also a double row of warehouses, also presumably presenting a grand façade to the harbour. The other side, the south eastern front, was in practical terms the prime commercial property, for it had a double frontage, on one side facing onto the harbour, but on its rear side facing onto the new canal, so presumably it was possible to transfer goods from the great seagoing freighters into warehouses and then on to the barges waiting on the new canal to go straight up to Rome.

The south side of the harbour is more problematic, as only a small area was available for geophysical study. Lanciani in his plan of 1867, marked down one of the buildings as the Stazione dei Vigili, and it is perfectly logical that this group could be the customs headquarters. Then there is the actual entrance to the harbour, which is the main feature of the south-western side. The far side of the harbour entrance must have presented one of the most difficult problems of all. Logistically, it is the least attractive area, being the most distant from the canals. However, architecturally it was in rather a vital position in that it would have been one of the main features facing a ship entering harbour. The problem was only solved some half a century later, with the foundation of a very large building, partly still standing above ground, known as the Grande Magazzine di Settimio Severo – though recent work on tile stamps has suggested that it was built not by Septimius Severus at the beginning of the 3rd century, but by Marcus Aurelius in the later 2nd century.

Finally we come to the north-west side, which is the most controversial of all. The early seekers of treasure had a grand time here. There were underground columns, apsidal rooms with mosaic floors, niches containing statues, a theatre of modest proportions and even a set of baths. Tile stamps were found with the name of the Empress Plotina, wife of Trajan and so the building came to be labelled the Imperial Palace. Simon Keay, Martin Millett and their colleagues are not quite so sure. Geophysics was difficult – in particular on the southern side they have the impression that buildings survive at least two storeys high, and that geophysics was merely revealing the plan of the upper storey. Lanciani’s semicircular theatre turned out to be in the ‘wrong’ place, and was in fact a complete circle truncated by the late antique walls. It now reappears in our description of the Claudian harbour where it is suggested that it was the base of a small lighthouse. A number of the buildings look suspiciously like small warehouse buildings. The trouble is that when the excavations were carried out over two years in the 1860s, Lanciani the director of the excavations, only visited the site for a single day, and his plan is therefore somewhat hypothetical. Despite all the previous desecration, clearly a lot still survives. This is surely the prime place for further excavations.

Another area was discovered to the northeast when examining some aerial photos that were taken by customs officials. They failed to find any smugglers, but the archaeologists found in them a rich haul of crop marks. There would appear to be three or four very large temples, each in their own enclosure. Was there also a small triumphal arch, and was at least one of the temples an early Christian basilica?

The survey having been completed, what is next? Two new projects have been proposed. These have been masterminded by Simon Keay, Professor of Archaeology at Southampton who has been awarded a five year Research Professorship at the British School at Rome to undertake them. The first would comprise a joint Southampton, Cambridge and British School at Rome programme of excavation led by Simon Keay and Graeme Earl (also at Southampton), which would look at the development of a keyarea around the Imperial Palace, and further field survey in the hinterland of the port led by Martin Millett. Simon Keay’s second project hopes to re-assess the evidence of amphorae – huge jars for transporting agricultural produce – and marble for links between Portus and a range of key ports across the Mediterranean. He wants to focus, amongst other things, upon the evidence of amphorae for carrying olive oil from the area between Seville and Córdoba in southern Spain (the Roman province of Baetica), and which were exported to Rome through the major ports at Seville and Cádiz. Much of Simon Keay’s earlier work has been in southern Spain where he has recently completed a study of the towns, near to which the Dressel 20s were produced. Now he can study the other end of the story, of how they were imported to Portus, transhipped and carried upriver to Rome where they were used and eventually smashed up and abandoned on the huge hill of amphora sherds at Monte Testaccio. In this way a whole new light can be thrown on the activities of the Roman port at Portus.