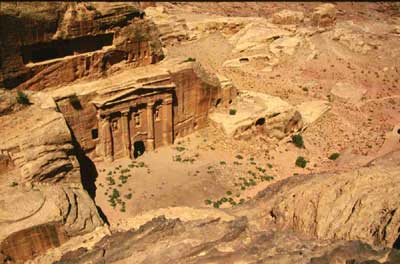 Petra is one of the mystery cities of the ancient world. Everywhere there are tomb facades quarried into the rose-red hillsides. But how did these tombs function? The best answer appears to come from the Tomb of the Roman Soldier – which is not Roman at all, so here it is called the Tomb of the Soldier. This is one of the best preserved tombs, but one of the least visited, as it lies far from the main tourist route. Currently Stephan Schmid is excavating it on behalf of the Palestine Exploration Fund and others, and here he asks the big question: how did these tombs actually ‘work’?

The Tomb of the Soldier not in the main valley at Petra, but is set across a narrow side valley. Here the tomb itself is top right, the facade carved out of the red sand stone. It faces across a courtyard to another room on the far side (see below) where ritual banquets were held . In the foreground is the elaborate entrance which blocked up the width of the valley to form the courtyard beyond.

Facing the tomb was the dining room or triclinium, hollowed out of the living rock. The low benches on which the diners reclined can be seen round the sides.

The entrance to the tomb on the up hill side was marked by another elaborate facade known as the ‘Garden Temple’. Note to the right the stone wall which is one end of a huge cistern which supplied water to the whole complex.