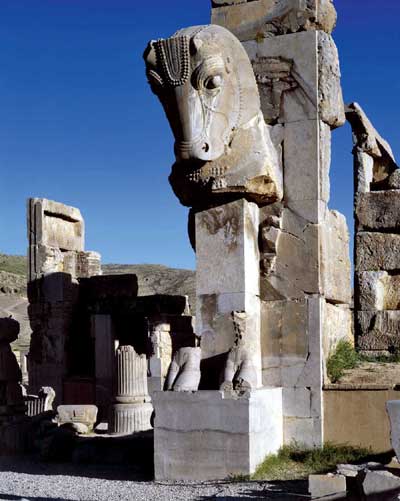 The Near East’s mightiest empire

The early part of the Achaemenid empire is very well known thanks to the Greek historian, Herodotus. His story of the Persian War marks the beginning of history as we know it. For the first time, instead of official inscriptions in which kings record their conquests, we have a lively text recording the story from both sides: alongside the Greek version, Herodotus also gives his ‘Persian version’, telling the story of the rise of the Persian empire. Though riddled with Greek bias and anti-Persian propaganda, some of which has trickled down to the present day, his story remains incredibly useful.

Herodotus thus records in alluring detail the crucial early success of Cyrus the Great (550-530BC) in defeating Croesus the king of Lydia. This led to his conquest of the whole of Asia Minor, which thus brought him into contact with the Greeks. But far more important was Cyrus’ conquest of Babylonia and the territories towards the Black Sea. Cyrus is also famed for establishing a new capital at Pasargadae in the mountainous Persian heartlands. Its complex four-part palace gardens were discovered by archaeologist David Stronach in 1961-3. They seem to foreshadow the formal gardens for which Persia became famous in the Islamic period, and which were copied by the courts of 16th century Europe.

Cyrus was followed briefly by Cambyses (530- 522 BC), who conquered Egypt, but it is his successor, Darius (522 – 486 BC) who is the second great leader of the Achaemenid period. Darius was an impressive administrator who divided the empire into 20 provinces or satrapies. He moved the capital to Susa, where he greatly expanded the existing town, which remained the administrative capital of the Persian empire. He built the Royal Road, a thousand miles long from Susa to Sardis in Asia Minor, and cut the canal from the Red Sea to the Mediterranean thus anticipating the Suez Canal. The unstoppable Darius also began to build a grand new capital at Persepolis, which was completed by his successor, Xerxes.

Xerxes is best known, perhaps unfairly, as the king who was defeated by the Greeks at the battles of Salamis and Platea, though from the Persian point of view this was probably no more than the unfortunate outcome of a punitive expedition on the far fringes of the empire. After his completion of the building of Persepolis, Herodotus’ history come to an end, so Xerxes’ successors are less well-known. But the Persian empire continued to flourish until 331 BC, when Alexander the Great finally destroyed it, and shamefully, burnt Persepolis, an act of vandalism for which it is difficult to find an adequate excuse.

A tour through ancient Persia

The exhibition takes us through the story of this mighty empire, with each gallery focusing on a different theme or subject. It opens with a gallery dedicated to the architecture of the Achaemenid period. This is best represented at Persepolis, where a mighty flight of entrance-steps leads up to the terrace of the main palaces. In 1892, casts were made of some of the relief decoration at Persepolis by the Weld-Bundell expedition. One set of casts – now the only complete set – was brought back to the British Museum. The set has hitherto been kept in store rooms but two impressive casts have now been brought out of storage and run the length of the exhibition.

The ornamentation on display clearly reflects the wealth of the Persian empire. However, we can also sometimes discern foreign influences within the art. For example, a winged figure in a doorway relief at Pasargadae wears an Egyptian crown, while Egyptian-style feather decoration above the windows and doorways feature in some of the buildings at Persepolis. Indeed, we know from an inscription by Darius that the construction of his palace at Susa used craftsmen from across the empire – including stonemasons from Ionia, carpenters from Sardis, and that the men who ‘adorned the wall’ were Medes and Egyptians. Of course, some items were the spoils of war, such as the archaic, and thus extremely rare, Greek statue known as Penelope. Penelope was originally exhibited in Persepolis and is thought to be booty from Greece taken during the Graeco-Persian wars.

If the Persians took so much inspiration (not to mention booty) from the people within their empire, what was their contribution or style? Despite the cultural diversity that existed within the empire, some homogeneity can be detected in the material record. Certain types of buildings and classes of artefact existed throughout the empire. These were often decorated in a distinctive fashion that is sometimes labelled ‘court style’, and possibly represented an official style. For though it was clearly impossible to administer such a huge empire directly from the Iranian heartland, once Darius had divided it into provinces, each of which was put under the control of a local governor or satrap, this provided a certain degree of standardisation – certainly from the fiscal point of view.

A good example of a court-style building is the aforementioned apadana, a distinctive columned building (as illustrated on page 51: plan of Persepolis). However, though examples are found across the empire, they are few and far between. Some classes of artefact are also identifiably Achaemenid. For example, the akinakes or short sword, with its characteristic scabbard. Jewellery with polychrome inlay is also typical of the period and culture. Perhaps the bestknown examples of such jewellery come from the hoard of gold and silver objects that make up the so-called Oxus Treasure.

The treasure was apparently found altogether on the bank of the River Oxus in Bactria, Central Asia, at around 1880. The 180 or so objects that make up the hoard are kept in the BM, and include good examples of polychrome jewellery, such as the two gold armlets with griffin terminals, shown right. The hoard also includes chariot models, statuettes, a gold scabbard showing a lion hunt, figures of animals, vessels, clothing ornaments, and about 50 plaques mostly with designs of human figures. The latter are clearly votive. Indeed, the Treasure has the appearance of material that was dedicated to a temple – perhaps over a period of several centuries: around 1,500 coins were associated with the Treasure, covering a span of about 300 years down to the early 2nd century BC.

Athens vs Persia: the legacy

But what was the Persian legacy? Most of us are familiar with the notion that the democracies imposed upon, or adopted by, modern states descend by circuitous routes from the democracy of 5th century Athens; but generally unfamiliar is the debt we owe to the Persian empire. Yet ever since the cataclysmic Graeco-Persian Wars of 490-480/79 BC, we have tended to think of the Greek (and thus European) spirit as being in fundamental opposition to Eastern culture: Western democracy versus Eastern monarchy; freedom and accountability versus opposition and absolute rule; the free-spirited art of the Parthenon versus the rigid, monotonous processions of Persepolis. This exhibition paints quite a different, and important picture: of the Persians as a progressive, united, formidable, yet inclusive and culturally developed empire.

The British Museum’s enlightening exhibition, which sets to put Persia back on the map of our consciousness, runs from September 9th and continues until January 8th 2006.