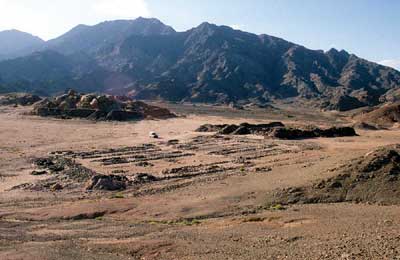 On 21st of July AD 18, a Roman geologist discovered porphyry. Porphyry is a magic stone, dark purple in colour, and the emperors immediately fell in love with it and demanded to have it in huge quantities. There was only one problem: it is only found in one of the most inhospitable places on earth, high up in the eastern deserts of Egypt, five days’ from the Nile. A huge quarrying operation was set up at two sites- MonsPorphyrites itself and nearby at Mons Claudianus, which produced a superb black marble. the columns were quarried high-up on the mountain side – the picture shows a column that broke and was left in position. They were then dragged down the mountain side, 70 miles across the desert to the Nile, then shipped down the Nile, and across the Med to Rome.

The recent excavations have not only revealed the well-preserved quarries and the dwelling places of the quarry men, but have also revealed thousands of ostraca, that is potsherds with inscribed messages, that provide fascinating details of how the quarrying took place, and of how the quarrymen ordered their food – some for themselves, some for their wives on the Nile.

And there were no slaves. Everyone assumed that such mines were worked by slaves, but when all food has to be imported, slaves are too inefficient, and the work was done by highly paid, skilled workers. The story of Roman slavery will have to be re-written.