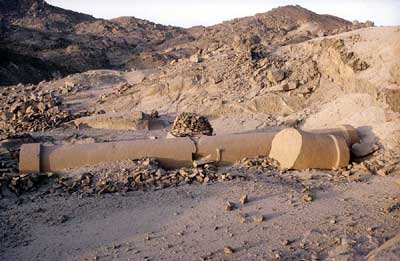 How far did the Roman empire depend on slaves? Marxist theology sees slaves as being the essential component of Roman imperialism, and it was widely expected that quarries such as Mons Claudianus would have been worked by slaves – indeed that is one of the main reasons why the project was established in the first place.

However the big surprise is that there were no slaves: among the most important finds from the sites were numerous ostraka – sherds of broken pottery which were used as a writing material on which all the daily details of life in the mines were recorded – such as that shown here.

These record life in the greatest detail: since all food had to be imported from the NiIe – 5 days camel ride away – there are listings of the total number of people on camp – over 1000, as well as instructions from the workers as to how their monthly wages were to be spent – and how much was to be paid to their wives back on the Nile. The workers were very well paid – in these conditions, it was necessary to pay well to attract the best workers.

And none of them were slaves: there may be an exception for the familia Caesaris, the imperial bureaucrats, who ran the organisation. Their status is controversial, and some of them may have been technically slaves; if so, they were very superior slaves, for it was they who gave the orders as to how the workmen should be deployed.

The ostraka from Mons Claudianus – over 9,000 in all – are still being studied, but it is clear that the extent of slavery has been grossly exaggerated – not least by the Romans themselves, for the aristocrats on whose writings we depend, did probably not differentiate too closely between a slave and a highly skilled free workmen – and it was the latter who ran the Roman empire.