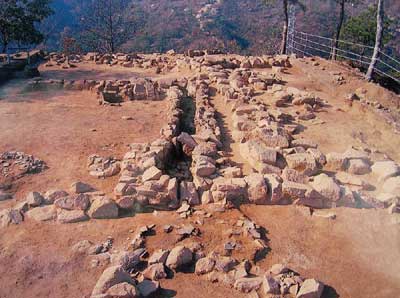 It is around the year 550 AD. The River Han, which flows through (and is the reason for) modern Seoul, is the frontier between rival Kingdoms. To the north are the Goguryo, the northernmost of the Three Kingdoms, who occupied most of what is today North Korea as well as part of China. They have for long been pressing southwards, and in 475 they forced the Baekje to abandon their original capital at Hanseong, near present-day Seoul, and to move 100 miles further south to Gongju, where King Muryong was buried. However the Baekje, now allied with their neighbours to the east, the Silla, are fighting back, and the River Han is the frontier.
On either side of the river the rival forces were encamped, with the Goguryo dug in firmly to the north of the river near Achasanseong, which means the hillfort (= sanseong) of Acha mountain. Here a row of forts was established, and in recent years the archaeology department at Seoul National University under Professor Im Hyo-Jai have been carrying out a training excavation. They have now excavated three forts in all, laid out approximately 500 metres apart, and we were able to visit the current excavation at Hongryeon-bong while it was still in progress.
The forts have interesting analogies with the Roman forts on Hadrian’s Wall. Hongryeon-bong was built to accommodate approximately 50 men, forming part of a defensive line. However, whereas on Hadrian’s Wall the soldiers were usually accommodated in individual barrack blocks, in Korea most of the accommodation was in the two side-buildings. At one end there was a blacksmith’s workshop and the central building was a common place, with two main functions of storing water and housing the ondol. The ondol was both a cooker and a heater with a fireplace to cook food and a stone tunnel structure for heating – later the ondol became not unlike the Roman hypocaust.
In the end, the Goguryo and Baekje were overwhelmed by the Silla, and in the seventh century the United Silla power was established over the whole peninsula, which was to last from the 7th to the early 10th centuries. However when the United Silla eventually collapsed, one of the war-lords of the Goguryo seized power, and established a new dynasty which ruled for a further 300 years, till they in turn were replaced by the Joseon dynasty which ruled in Korea down to 1910. But it is the Goguryo, who renamed themselves the Goryo, who have given their name to modern Korea.

My thanks to Si-eun Yang, Professor Im Hyo Jai’s research assistant, who has sorted out many of the mis-conceptions in my original draft – AS.