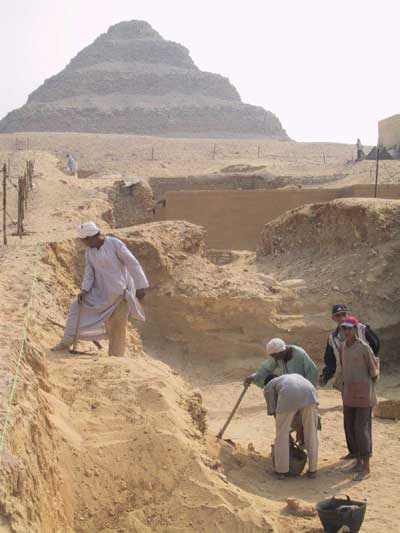 The step pyramid of Zoser, rising some 62.5m high, was built around 2668 – 2649 BC – over one century before the Great Pyramid of Giza. Though the latter is famed as one of the Seven Wonders of the World, Zoser is the tomb that established the pyramid as a form. It was the first really massive organisation of manpower that showed ancient Egypt to be something really exceptional.

I have been digging at Zoser with my colleagues from the Polish Centre of Mediterranean Archaeology in Cairo. This centre was established back in 1959 by the great Polish archaeologist, Kazimierz Michalowski (1901-1981) who had carried out excavations in Egypt before the Second World War, but was then kept away from Egypt for 20 years because of the periods of political “protection” that shadowed Poland – first under German Nazis, then by Russian Stalinists.

It was a few years after the great man’s death, in 1987, that I eyed the pyramid of Zoser. The surrounding cemetery had been well explored in the areas towards the Nile, on the pyramid’s eastern side and also to the north and to the south. But would there be any graves on the western, that is the desert, side? I was granted a concession to explore, so I carried out an extensive geophysical prospection that indicated interesting prospects and our team, made up of Poles and Egyptians, have been digging there since 1996.

Initially, before we got to the Old Kingdom tombs, we spent a great deal of time clearing a vast amount of Ptolemaic Period material. The area had been an extensive and popular cemetery from the 4th century BC when Egypt became part of Alexander’s empire. We excavated over 400 burials from this time. Many contained mummies apparently in the classic Egyptian form. However, in some cases the hieroglyphs adorning them seem to have been painted on as random ornaments, rather than by someone who knew what the glyphs meant. The burials proved to be a fascinating source of information, and such was their variety that one of the scientists was heard to exclaim ‘what a fantastic sickness!’ as she studied a particularly interesting skeleton.

There is an intriguing gap between this later material and the Old Kingdom material – we have nothing between 2200 and 400 BC. Whether the site was simply abandoned in this period, or whether it was respected because of the neighbourhood of a particularly important person’s burial, remains uncertain. However, in 1997, we started digging the material from the Old Kingdom period, that came to include two well preserved mastaba belonging to a vizier – the King’s chief official – and a priest. (A mastaba is a flatroofed, mudbrick, rectangular building, containing, among others, a chapel for the cult of the deceased, with sloping sides, that marked the burial site, i.e. the tomb, of eminent Egyptians during the Old Kingdom.)

There is an intriguing gap between this later material and the Old Kingdom material – we have nothing between 2200 and 400 BC. Whether the site was simply abandoned in this period, or whether it was respected because of the neighbourhood of a particularly important person’s burial, remains uncertain. However, in 1997, we started digging the material from the Old Kingdom period, that came to include two well preserved mastaba belonging to a vizier – the King’s chief official – and a priest. (A mastaba is a flatroofed, mudbrick, rectangular building, containing, among others, a chapel for the cult of the deceased, with sloping sides, that marked the burial site, i.e. the tomb, of eminent Egyptians during the Old Kingdom.)

Tomb of the priest and the vizier

The area west of the Zoser pyramid is a deep slope that ends with a moat filled with sand, blown in from the desert. Here we located the tops of many shafts that seemed to lead down to subterranean burial chambers. In 1997, we gradually cleared out the façade of an Old Kingdom funerary chapel. Somewhat gingerly we removed the crude walling and then, with mounting excitement, we revealed the lintel to the tomb and could read the name and the titles of the person buried there: the vizier Meref-nebef, the most important figure in Pharaonic Egypt after the king. Merefnebef also had two other names: Fefi, being his “fair name”, and Unas-ankh, constituting his “great name”. We tend to refer to him simply as Fefi.

Fefi’s “great” and “fair” names reveal the date of his mastaba to be around 2300 BC. This is because the second name, meaning “may (King) Unas live”, contains the name of the last king of the fifth dynasty, Unas (c.2356-2323 BC), and the first one resembles those of the greatest pharaohs of the 6th dynasty (Pepy). In addition, the hieroglyphic inscription sculpted on the internal lintel informs us that the vizier also served as a priest connected with the pyramid of King Teti , the first king of the Sixth Dynasty. Teti’s pyramid still survives on the north-eastern side of Zoser’s pyramid while the pyramid of Unas stands on its other, south-western side. It is easy to understand the location of the vizier Fefi’s tomb between the funerary monuments of these two pharaohs.

In 2003, we then found another well preserved mastaba. It belonged to the priest Ny-ankh-Nefertem, who donned the “fair name” Temi. So far, we have uncovered Temi’s chapel (CH 15), court, and part of the tomb’s superstructure, but are yet to explore the shafts found in the floor of his cult chapel.

Temi’s tomb is dated to the mid-sixth Dynasty, a few decades after Fefi’s. Both tombs are part of a larger architectural unit comprising four rock-hewn cult chapels grouped on two sides of an irregular, quasi-rectangular court, whose east and north walls are cut in the rock. The tombs of the priest and vizier are next to each other (Ch 11 and 15), cut into the rock of the court’s east wall, while the cult chapels of two other tombs (Ch 16 and 17) are hewn in the court’s north wall.

All the four mastabas remain unfinished, but the stage at which the work was abandoned, is different in each case. We think that the works were most likely interrupted by the death of the tomb owner. Fefi’s tomb has an unfinished small cult chapel, an unfinished colonnade, and the northern section of one of the walls of the main courtyard is also unfinished. These incomplete parts seem to belong to the very last stage of tomb construction, after Fefi had been promoted to the function of vizier (as he, with modest predictability, mentions several times in the inscriptions on the façade), and had decided to enlarge and “monumentalize” his previously rather simple sepulchre.

Meanwhile, the third cult chapel (Ch16) is hewn in the north wall of the common semirectangular court. It too has unfinished relief decoration, and is anonymous since the inscription containing the deceased name and title(s) has long since crumbled away. The fourth chapel (Ch17) lies to the west of the anonymous chapel. It is the smallest one, is roughly hewn in the rock, and void of any decoration. We think that the four tombs constitute a structural, and probably also a chronological sequence that may correspond to the development of the necropolis during a longer phase of the Sixth Dynasty.

From the wall decoration of the tombs of the priest and the vizier, we can get an insight into their lives. In both tombs, the south wall’s decoration is similar in general concept, although the style and details of the decoration in each is different. Thus, to the right of the southern wall, we can see a large size representation of the tomb owner seated in the company of his wife.

We can see that priest Temi had only one wife: only one is registered in the decoration of his tomb. She gave him nine children, seven boys and two girls. In contrast Fefi enjoyed the company of four ladies represented several times on the walls of his chapel, most frequently as a quartet of harpists, and always labelled with the title “his beloved wife”.

However, maybe all was not happy in the family of Fefi. Some of the figures and legends have intentionally been erased. Moreover, one of Fefi’s sons, probably not his eldest, replaced a figure of his father with his own effigy on a (probably crumbling) part of the relief decoration in his father’s chapel.

The scenes in front of the tomb owner and his ‘wife’ are in each case different. In Fefi’s tomb, a lavish festival scene incorporates three registers of female dancers, musicians and singers, whereas in Temi’s tomb there are three long registers showing various motifs: a sequence of papyrus boats in the upper register, a procession of offering bearers in the middle one, and a row of female dancers in the lower one. However, the dancers do not perform the acrobatic high-kicking of the figures represented in two registers of the Fefi panel, but a quieter dance that is illustrated in only one register of that scene. The choice made by the artist seems to fit the temperament and social position of the priest.

We also think that the differences in the two tombs may reflect a wider turbulence in the social life of the Sixth Dynasty. It is as though Temi chose to display his representations in a closed place in order to hide them away, far from any public view. Moreover, it is notable that he feels compelled to multiply the number of two-dimensional figures showing himself (the tomb owner) on the walls of his chapel, and that he then searched for a place where these representations – believed to contain his life-force – could feel secure.

After the excavation of the vizier’s tomb, work moved to the west, to the very edge of the “dry moat” that surrounded Zoser’s pyramid enclosure. Here we discovered a low entrance fronting a horizontal passage leading back under the surface of the rock at the far end of which was a rectangular chamber full of the bones of wild animals. Even more surprising was the discovery of an enormous harpoon (2.60m long) made of one piece of wood and deposited in a cylindrical case made of the same material. This harpoon is unique in every respect. Its shape, size and weight, as well as its decoration in relief showing two attacking snakes, prove that it could only function as a ritual object and not as a weapon used for hunting crocodiles or hippopotami, as one often sees in the scenes depicted on the walls of ancient Egyptian tombs and temples. Given that this kind of weapon symbolized the god Horus, with whom every pharaoh was associated, we think that the bones must symbolize Seth, his mythological adversary, the somewhat rowdyish but very smart “god of confusion”. The mysterious chamber must surely be interpreted as the subterranean part of a sanctuary connected with the cult of these important divinities.

It is in the neighbourhood of the latter tomb that the most surprising discovery of this campaign was made, evidence for a huge platform was built centuries after the Old Kingdom, possibly in the New Kingdom, in order to cover, and thus protect (or hide?) a monumental subterranean tomb of an extremely important individual from times preceding the construction of the first pyramid or contemporaneous with this event.

If so, we would be dealing with an architectural expression of particular respect and devotion to Old Kingdom traditions, more than one thousand years after the fall of the Old Kingdom, proving the adage that fashion comes around. And this to date, is the story of our continuing excavations of one of the world’s most fashionable cemeteries, the cemetery at Zoser.