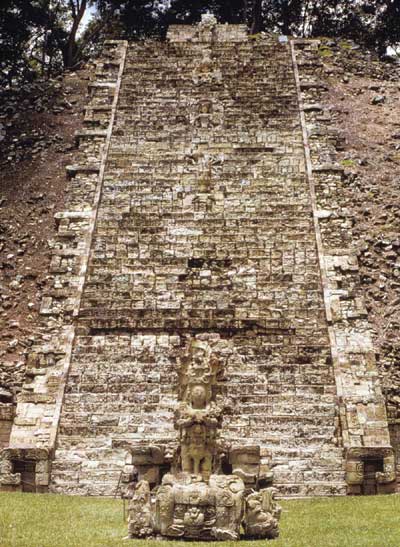 Copan was the capital of one of the most important Maya city states. Its copious hieroglyphs offer a detailed history of the rise and fall of Copan starting with its founding by K’inich Yax K’uk’ Mo’, or ‘Radiant First Quetzal Macaw’, at the precise date of AD 426. But is this history true? To discover more, Penn Museum archaeologists tunnelled to the heart of the site. The results are remarkable.

Copan in context
Copan is the southernmost of the great cities that thrived during the Classic Maya period (c.AD 250 – AD 800). It was also one of the first Maya cities to be explored, having been discovered in the famous pioneering work by John Lloyd Stevens, the American diplomat, journalist and explorer, and his English artist Fredrick Catherwood in 1839.

The site is situated in what is today Honduras, separated from the other Maya cities in Guatemala, Belize and Mexico. It lies in a very fertile valley, which has been occupied for over a century. Therefore, unlike most other great Maya cities, Copan is surrounded by cleared agricultural fields rather than jungle, and the modern town of Copan Ruinas overlies its eastern suburbs. The central area of the ancient city, known as the ‘Main Group’, consists of two major complexes. To the north are the public plazas, including a Ball Court and a Monument Plaza with many of Copan’s carved stele and altars. To the south is the Acropolis, consisting of East and West Courts surrounded by the palaces and temples of its kings. Beyond the Main Group were the dwellings of the aristocracy and common people.

Copan is dominated by two major pyramid-temples. The more unusual is Structure 26 to the north, projecting out from the Acropolis into the Great Plaza and adjacent to the Ball Court. The most remarkable feature is the great Hieroglyphic Stairway, which leads up to the summit some 69 feet high. The risers of the steps are covered by 2,200 hieroglyphs that record Copan’s dynasty. This is by far the longest known Maya inscription although, when discovered, most of the glyphs had collapsed into a heap, now lovingly reconstructed.

The biggest temple of all is Structure 16, standing in the centre of the Acropolis and separating the East Court from the West. In front of it is a carved throne, known as Altar Q, dedicated in AD 776 by the king Yax Pasaj, who oversaw the final constructions in the capital. On it he proclaims himself to be the 16th ruler of Copan, with portraits of the founder and his 15 successors carved on the four sides. Altar Q’s text records Yax K’uk’ Mo’s installation as a Maya king in September 426, and his arrival in Copan five months later to take his throne.

The founder of the Copan dynasty was K’inich Yax K’uk’ Mo’, (‘Radiant First Quetzal Macaw’), who ruled from AD 426 to 437. His reign covered one of the important dates in the Maya calendar: the beginning of the 9th baktun in AD 435. The Maya baktun was a period of 144,000 days, a little less than 400 years. This put the creation of the world at 3114 BC, and the ninth baktun at around AD 435. Several of the subsequent rulers are well recorded, including Ruler 8 – Wil Ohl K’inich (AD 532-551) – who we will meet later on. But the greatest of the rulers was probably the 12th, Smoke Imix, who reigned for no fewer than 67 years – from AD 628 to 695. Alas, his successor, Waxaklajuun Ubaah K’awiil, a prolific builder who rebuilt the Ball Court, let the side down when in AD 738 he was captured and beheaded by the neighbouring city of Quirigua.

Quirigua had hitherto been a small vassal state, but under its dynamic ruler K’ahk’ Tiliw Chan Yopaat (AD 724 to 785) it rebelled from Copan and briefly made itself into a major power. Nevertheless, Copan revived – it was a much bigger city – and lasted through to the 16th ruler, Yax Pasaj (AD 763-820), the last great king who not only carried out the rebuilding of many of the structures and recorded his deeds on Altar Q, but also presided over the decline of Copan. This decline was general throughout the Maya world: the reasons for it are still a matter of hot debate. Evidence from Copan suggests that overpopulation had created increasing problems. As a result, agriculture had expanded too fast, and even the steep sides of the hills had been brought under cultivation, leading to erosion, while studies of human burials suggests that under-nourishment was becoming rife towards the end of the Classic period. In the end, Copan had expanded too far and could no longer feed itself, so collapse was perhaps inevitable. There was one more recorded ruler, but the inaugural altar which he began was never completed.

We have therefore a splendid history of the rise and fall of Copan, based on Altar Q and other inscriptions: but was this history true? Were there really 15 prior rulers, or was this essentially a foundation myth?