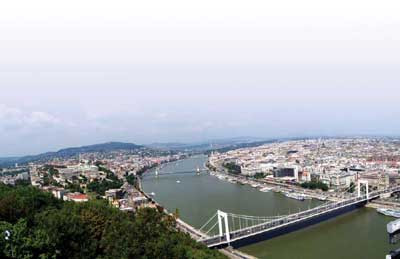 In the opening months of 1945, as Nazi Germany met its gotterdämmerung, the mighty Russian army was pressing rapidly forward. The Germans decided to make their last defiant stand on the Danube, on the site of Budapest.

Budapest is a twin city with historic Buda on the hilly western bank of the Danube and flat sprawling Pest on the eastern side. The Russians came up from the east and, with great difficulty, conquered low lying Pest. With the Danube lying between them, they shelled each other for three months – and in the process Budapest was smashed to smithereens, with scarcely a building left standing.

The German army collapsed: the final battle of Berlin was only a couple of months away and lasted just a couple of weeks. Budapest was perhaps the fiercest single battle on the Eastern front of the whole war.

After the war, the communists took over, and centralised planning was the order of the day. What should be done to shattered Budapest? In the centre, the historic hearts of Buda and Pest were lovingly repaired. Buda in particular was restored house by house and street by street and, today, the late Medieval layout still preserves something of the magic of a bygone age, while Pest evokes memories of the florid glories of the Austro-Hungarian Empire.