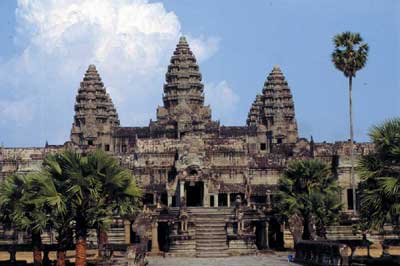 What is the origin of Angkor Wat? The great temple of that name, and the city in which it is set, are one of the great marvels of the world – but where did it come from, and what were its origins? When exploration began in the 18th and 19th centuries, it was quickly obvious that there was strong Indian influence. The numerous inscriptions were written in an Indian script and many of them were in Sanskrit, the sacred language of the Hindus. Furthermore, the temple was established to Vishnu, a Hindu deity, and also included statues of Buddha. There was clearly strong Indian influence, but did this also imply an Indian invasion?

In 1922 Albert Foucher was in no doubt of it and spoke of Indians coming to civilize ‘a savage population of naked men’. Later scholars reached a similar conclusion, though more cautiously. Thus George Coedes, the doyen of Angkorian studies who did so much to collect and study the inscriptions and to try and reconstruct a history from them, suggested that there was ‘a steady flow of immigrants that resulted in the founding of Indian kingdoms, using Sanskrit as their sacred language’. How far is this true? In the past generation invasion theories have been under attack; should they survive in Cambodia? Just how far was there Indian influence? And what was the condition of the native inhabitants before Angkor rose to prominence? An archaeological project, headed by Charles Higham of the University of Otago in New Zealand and the Thai archaeologist Rachanie Thosarat, is seeking to unravel these problems.

What is Angkor?
The secret of Angkor rests in its exceptionally fertile position. It lies just beyond the banks of the Tonle Sap, or Great Lake, which is not only the largest lake in south-east Asia, but also one of the largest in the world. The Tonle Sap is subject to a strange and unusual phenomenon. It lies along one of the principal tributaries of the great Mekong river, but every year at the time of the monsoon, the river goes into reverse, and the water from the Mekong flows back up its tributary, thus increasing the size of the Great Lake many times. When the water level recedes, the land is ideal for rice cultivation in great abundance.
There are three main features at Angkor. Best known is the impressive temple of Angkor Wat itself, built by Suryavarman II, the greatest of all the kings of Angkor between his accession in 1113 and his death in 1150. However this is only part of the whole complex. There is also the great city, with its walls and temples and houses. It once contained the great palaces, though as the palaces were of timber, none has survived. The third feature, in its way equally remarkable, are the three huge artificial lakes that are found in the vicinity. These are the subject of immense controversy. Were they essentially functional – reservoirs to provide water in times of famine? Or were they ritual? At the centre of each was a temple set on an island: do these reservoirs represent the Hindu mythology?

When Charles Higham came to investigate the origins of Angkor Wat, he had two main starting points. Firstly, modern politics meant that it was not possible to excavate in Cambodia due to the revolution of the Khmer Rouge. However was it possible to excavate just to the north across the border in modern Thailand? On this subject there is a crucial article in Antiquity (1950) written by Peter Williams-Hunt who had plotted a number of irregular earthworks along the valley of the River Mun. Did these provide the origins of the water management involved in the reservoirs of Angkor? Charles Higham decided to excavate along the Mun river, itself a tributary of the Mekong, the next north to the Tonle Sap River. Three sites in particular proved extremely fruitful.

Noen U-Loke: The Iron Age and water management
One of the most remarkable features at Angkor are the huge reservoirs known as barays. These do not appear to have any parallels in India. Are they then the best example of a purely local feature of the Angkor civilisation? Interest in water management was stimulated by Williams-Hunt’s 1950 Antiquity article on irregular earthworks: further examination shows that many of these (see below)were moated sites, with moats rather excessive for any functional purpose.

However, the most spectacular and fruitful excavation has been at Noen U-Loke, where a trench 200-metres long and up to six metres deep was dug in a single day by a mechanical digger, and hastily examined before it filled up again with groundwater. This procedure was repeated at five other moated sites in the study area by Professor William Boyd, the project geomorphologist. The sediments and the radiocarbon samples revealed that the banks were constructed during the Iron Age, between about 200 BC and 500 AD, to divert and control the rivers that flowed past the settlements. In the interior of Noen U-Loke, large area excavation revealed a cemetery with 125 inhumations, with dates spread over the entire millennium of the Iron Age, beginning in about 400 BC. The most common, though bizarre, type were the rice burials. Here the grave was dug, and the base was covered with a layer of burnt rice. The body was then inserted with grave goods and finally covered with rice. Many sackfuls must have been involved – a spectacular display of conspicuous extravagance – a real potlatch, to adopt an American term.

Many of the burials were rich in a more conventional fashion. Indeed, one of them went right over the top. He was a young man buried with 75 bronze bangles on each arm, covering armpit to wrist. The finger bones were dense with rings, and the toes bore large bronze rings. Around his waist, he had not one, but three, belts of bronze, and many glass beads. His ear coils were of silver, covered in gold, and he was accompanied by superb eggshell thin pottery vessels. Perhaps most significant of all, there was a single iron knife.

In comparing the site with the earlier Bronze Age site, the biggest change comes with the animal bones. By now, wild animals were virtually absent and instead, there was a predominance of cattle. Cattle and rice formed the basis of the agricultural economy. There was wide-spread evidence for iron smelting, though surprisingly, there was no evidence for pottery manufacture: the very fine thin pots must have been made elsewhere, presumably by specialist potters. However, there was also evidence for salt manufacture on a commercial scale. Did salt and iron form the currency with which they carried on their exchange? It was a rich community, ready to begin what archaeologists see as the rise to complexity.

The Origins of Angkor: Indian or Khmer?
Around 200 AD the pace intensified. In the south of the region, in the Mekong Delta, sites of an altogether larger size began to appear. The largest is that of Oc Eo, a walled city three kilometres long, by 1.5 kilometres wide, surrounded by ramparts and ditches and bisected by canals. In the 3rd century AD, the area was visited by the Chinese, who called it Funan. And from the 5th century onwards, the first Sanskrit inscriptions attest the strengthening of Indian influence.

Yet the evidence of the inscriptions is ambiguous. Although they are written in an Indian script, they are written in two different languages, and as Charles Higham points out, the two languages are entirely different – as different as English and Japanese. Sanskrit is, after all, one of the Indo- European languages, whereas Khmer is part of the Austroasiatic group, which includes Vietnamese. The high status inscriptions are in Sanskrit, whereas the more mundane ones are in Khmer – the language of the Cambodians. The kings – titled ‘Varman’ – are recorded in Sanskrit, while the workers are mentioned in Khmer, with names such as Dog, Stinker, and Black Monkey. Yet there are hints of a stronger Khmer background, in particular in the use of the word Pon, which means something like ‘Great Lord’, and which appears to be derived from an older Khmer substratum of society. Then around 550 AD, the civilisation in the delta appears to collapse and progress takes place in the valley of the Great Lake. And from 800 AD, Angkor itself began to rise to pre-eminence.

The Indian influence in the Angkorian civilisation cannot be denied, though one should note that no Indian colony has yet been discovered. However, the Khmer contribution is far more substantial than has been allowed before, and in particular the emphasis on water management maybe derived from local practices. And when Angkor was besieged and finally destroyed by the Siamese in 1431 and the splendour of the court was transferred to the Siamese kingdom (shades of The King and I!) it was the Khmer language and people that survived in Cambodia today.

Rice cultivation probably began along the Yangtze valley inChinasometime around 8 – 6,000 BC, but it is not until 4,000 years later that rice cultivation is seen inSouth East Asia. To get a glimpse of life in the Bronze Age, the project began digging a small sector of a large site known as Ban Lum Khao. This soon revealed an impressive cemetery: 110 burials were excavated, containing over 400 complete pots – with most burials containing several pots. Most spectacular were some infant burials set just above the head of an adult, in huge pots up to 0.5 metre in diameter. But even if the burials were more eye-catching, the most interesting part of the evidence came from the underlying settlement.

Here the important result came from the analysis of the animal and fish bones: the animal bones were mostly of wild animals, suggesting that the occupants were the first settlers moving into virgin territory. Similarly, the fish bones were rather larger than their modern counterparts, indicating that the settlers were probably fishing in rivers which had not been fished before.

The overall impression, therefore, is that this is still a relatively simple society. No bronzes were found in the burials, though there were signs of smelting: there was little evidence for differences between rich and poor within the burials. The most interesting evidence for trade lay in a number of sea-shell bangles that had been buried with the dead as ornaments and which must have been derived from the sea, 500 miles away. Several of these moated sites have been excavated and two in particular proved very fruitful. Non Muang Kao is a huge site, 50ha in extent, rising seven metres above the surrounding paddy fields: the name means ‘mound of the ancient city’. A section through the

wide moats that surrounded it suggested that they had been dug created by building banks. These controlled water that flowed past the site. It appears that the site had been surrounded by water in its hey day in the late centuries BC and early centuries AD, and some at least of these moats must have been deliberately created.