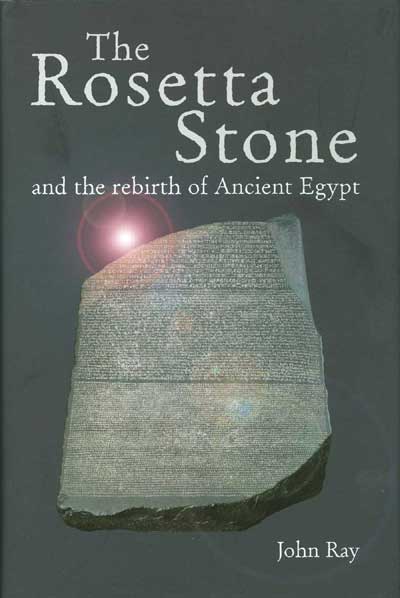 The Rosetta Stone and the Rebirth of Ancient Egypt
John Ray,
Profile £15.99

Which object lends its name to internationally known software for teaching languages, to a European space mission aiming to unlock the secrets of the solar system before planets formed, and to a technique for deciphering the human genome, not to speak of a Japanese glam rock group? Answer: the Rosetta Stone.

This unglamorous broken chunk of dark grey granite-like stone, weighing three-quarters of a ton and dated to 27 March 196 BC, is the most famous object in the British Museum. For years a plain postcard of it has outsold every other postcard in the museum’s shop.

As everyone knows, the stone is an icon because it provided the key to the writing of ancient Egypt and allowed the pharaohs to speak. In this latest addition to Profile’s enterprising series, Wonders of the World, Cambridge Egyptologist John Ray knowledgeably tells the story of the stone by drawing on four decades of engagement with ancient Egypt – a career partly inspired by a schoolboy encounter with the stone in the 1950s.

Thus Ray tells of the great intellectual achievements of Thomas Young, the English physicist and polymath who began its decipherment, and of his rival the French scholar Jean-François Champollion – who cracked the hieroglyphs in 1822 and founded Egyptology as a science.

Ray is acutely aware of the controversy about Young and Champollion since the 1820s: who discovered what and when did they go public in the period 1814-22, before Champollion forged ahead of Young. When the Rosetta Stone was lent to the Louvre (Champollion’s museum) for a month in 1972, French visitors complained that the portrait of Champollion was smaller than that of Young, British visitors vice versa, though both portraits were the same size. In 2005, a BBC television series on Egypt rewrote history by alleging that Young had taken up the challenge after receiving a high-level request to beat the French, whereas in fact he was initially motivated by pure curiosity and gave Champollion considerable early assistance.

Ray is sympathetic to both geniuses, he even proposes Young for the fourth plinth in Trafalgar Square, but as an Egyptologist his first loyalty is understandably to Champollion. He cannot altogether acquit Champollion of borrowing Young’s ideas without acknowledgement, but stops short of accusing him openly. ‘Compared with the paranoid feuds of Isaac Newton, Young was a model of diplomacy.’ I may be a bit biased as Young’s latest biographer, but I think the evidence strongly suggests that Young’s pioneering Encyclopaedia Britannica article on Egypt forced Champollion in 1821-22 into a crucial volte-face in favour of phoneticism in the Egyptian script, which he never admitted. Although Champollion deserves to be known as the decipherer of the hieroglyphs, his immortality will always be tainted by his hubris towards his even more brilliant but modest rival.

And what of the future of the stone? Should it one day be returned to Egypt? Ray favours keeping it at the British Museum, while sympathising with the return of the Elgin Marbles to Greece. His reasonable view-given the existence of similar, less broken stelae in Egypt-is that ‘The real impact of the Rosetta Stone has been not on the ancient world, where it originated, but on the modern world, to which it migrated in 1802.’

Review by Andrew Robinson, author of The Last Man Who Knew Everything: Thomas Young, The Story of Writing and Lost Languages. He is a visiting fellow of Wolfson College, Cambridge.