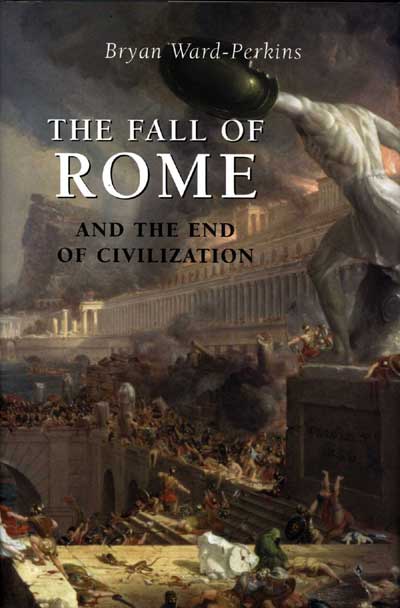 ‘Some of the recent literature on the Germanic settlements reads like an account of a tea party at the Roman vicarage. A shy newcomer to the village, who is a useful prospect for the cricket team, is invited in. There is a brief moment of awkwardness while the host finds an empty chair and pours a fresh cup of tea; but the conversation, and village life, soon flow on. The accommodation that is reached between invaders and invaded in the fifth and sixth century West was very much more difficult, and more interesting, than this. The new arrival had not been invited, and he brought with him a large family; they ignored the bread and butter, and headed straight for the cake stand’ – page 82.

All books about the Romans these days are political, and the main task of the reviewer is to sort out the writer’s politics. Bryan Ward-Perkins is a Fellow of Trinity College, Oxford, but was born and brought up in Rome where his father was director of the British School at Rome, and he tends to write from an Italian viewpoint. The foundations of the current views on Late Antiquity were laid by Peter Brown in 1971 in his classic book, The World of Late Antiquity which indeed invented the term ‘Late Antiquity’: he implied that the age between AD 200 and the 8th century was an age of steady transition. The process was taken one stage further by the Canadian scholar, Walter Goffart, who in 1980 in his book on the Techniques of Accommodation challenged the very idea of 5th century ‘invasions’.

Bryan Ward-Perkins sets out to combat these two views and his book falls into two halves. The first half deals with the invasions which he argues were real, and brutal. He takes, for instance, the treaty of 419 by which the Visigoths were formally settled in France and Spain. But he points out that for ten years before this the Visigoths had been causing mayhem throughout south-west France and that the treaty itself only granted them a fairly small area of the Garonne, from Bordeaux to Toulouse; their expansion over much of southern France and over virtually the whole of Spain came later, and was a real bloody invasion.

The second half of the book deals with the ‘End of Civilisation’, a term which in itself is controversial but which he argues strongly should be used. He defines it as being the ‘disappearance of comfort’ and much of his argument is based on pottery distribution which he says, surely rightly, to be a valid proxy for comfort and perhaps for civilisation. But the quality, and even more, the sheer quantity of pottery in the heyday of the Roman Empire, where good quality wares penetrated even into the humblest abodes, was not to be seen again until the 14th or 15th century.

He claims that the arguments have been skewed by failing to distinguish between the Eastern and Western Roman empires. In the West, under the hammer blows of the barbarian invaders, civilisation collapses in the 5th century. In the Aegean, civilisation lingered later, only to collapse rapidly after 600. However, in the Eastern Roman empire, sheltered from the barbarian invaders by the Hellespont, civilisation and a high standard of comfort lasted until the Arab invasions in the 8th century. Many of the arguments for the gradual transition in the world of Late Antiquity come by using arguments from the Eastern empire and applying them to the West.

How does he explain the collapse of comfort? Gibbon’s favourite explanation combined the attacks of the barbarians from without and of the Christians from within. The author, while agreeing about the attacks of the barbarians, rather tends to ignore Christianity. Neither does he accept my own belief that we need to think in terms of the collapse of a market economy. Instead, he mainly explains what he calls the ‘death of complexity’ on the disruption caused by the barbarian invasions, and the relative prosperity in the East on the lack of such invasions.

Where does one place the politics of such a book? Many of the arguments would I think find favour on the right, though some would also go down well with Marxists. His opponents, the believers in the smooth transition of Late Antiquity are to be found, I suspect, in New Labour, and especially, as he points out, in America. He also has an interesting passage on the ‘Euro-barbarian’ and the attitude of the European Union where the European Science Foundation has set up a research project on ‘The Transformation of the Roman World’ which appears to be implicitly biased in favour of the seamless transition view.

He sets out his own views in his final paragraph. ‘I think there is a real danger for the present day in a vision of the past that explicitly sets out to eliminate all crisis and all decline. The end of the Roman West witnessed horrors and dislocation of a kind I sincerely hope never to have to live through. Romans before the fall were as certain as we are today that their world would continue for ever substantially unchanged. They were wrong. We would be wise not to repeat their complacency.’