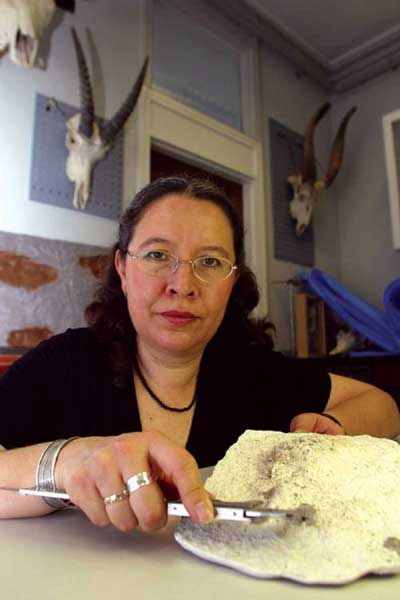 Who were the first to get to America and how did they get there? Footprints unearthed in central Mexico in 2003 may hold the key. An international team of geoarchaeologists finally completed dating the footprints earlier this year and conclude that the prints are around 40,000 years old. This is set to shatter previous theories on how humans first colonised the Americas.

A total of 269 footprints, both animal and human, were found in an abandoned quarry near the city of Puebla by a team led by Dr Silvia Gonzalez from Liverpool John Moores University (LJMU).The quarry lies130 km southeast of Mexico City, and the secret of the preservation comes thanks to its location close to the Cerro Toluquilla volcano in the Valsequillo Basin. Dr Gonzalez explained: ‘The footprints were preserved as trace fossils in volcanic ash along what was the shoreline of an ancient volcanic lake. Climate variations and the eruption of the Cerro Toluquilla volcano caused lake levels to rise and fall, exposing the Xalnene volcanic ash layer.’ The Xalnene ash is now as hard as concrete and is used locally as a building material. Gonzalez, and co-finders Prof. David Huddart also of LJMU and Prof. Matthew Bennett of Bournemouth University, were able to see the footprints without undertaking any excavation since the quarry workers had already removed between 2-3m of lake sediments that had been deposited on top of the volcanic ash.

Several short trails of footprints were visible in some parts of the quarry and of the 269 prints discovered, about 60% are human. Around 36% of the human prints have been classified as children’s because of their size.

On studying the footprints, the researchers found them to be indisputably human because they have some unique characteristics, including the presence of a non-divergent big toe (or hallux) which is about twice the size of its adjacent toe, and the fact that they have deep heel and ball impressions, encircled by the typical ‘figure of eight’ contours. Moreover, they fall within the size range for modern Homo sapiens.

So what does this surprising evidence suggest? The team believe that these are the prints of early Americans who walked across this new shoreline, leaving behind footprints that soon became covered in more ash and lake sediments. The trails became submerged when the water levels rose again, so preserving the footprints. The team’s findings pose serious challenges to considered wisdom on the settlement of the continent. Dr Gonzalez said: ‘We think there were several migration waves into the Americas at different times by different human groups.’

This debate has been running for more than a century. The traditional view – known as the Clovis First Model – is that settlers crossed the Bering Straits, from Russia to Alaska, at the end of the last ice age – around 11,500 to 11,000 years ago. Evidence for this theory comes from Clovis Points – tools used to hunt mammoths and mastodonts – found from many locations in the American continent.

However, since the footprints suggest that humans settled in the Americas as early as 40,000 years ago, this implies that the Clovis First Model of human occupation is invalid. In addition, new routes of migration to explain the existence of these much earlier sites now need urgent consideration. The team argues that their findings support the theory that these first colonists may perhaps have arrived by water rather than on foot, using the Pacific coast migration route.

Further sites have been identified in the Valsequillo Basin. Now thanks to the award of £212,000 from the Natural Environment Research Council, Dr Gonzalez and her research team will be able to carry out more extensive investigations to corroborate their initial findings and to further calculate the height, pace and stride of the human population present 40,000 years ago. Such research would help to create a picture of the relationship that these early Americans had with megafauna, such as mammoths, camels and other large animals.