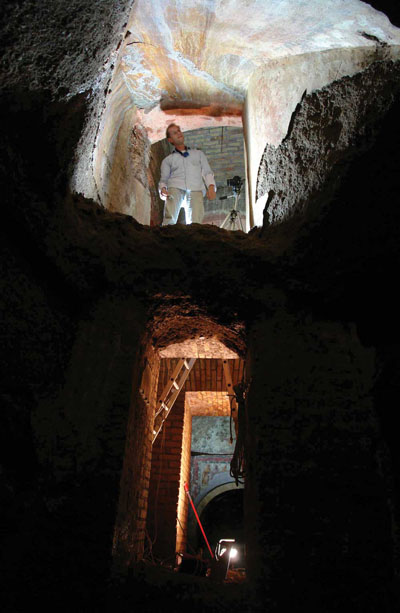 Rome’s underground catacombs stretch for some 105 miles and have never been fully documented or mapped. Now a team of Austrian and Italian archaeologists has developed a digital technique that enables this maze of tunnels, niches, ledges, tables and shrines cut from the soft, volcanic tufa beneath the suburbs of Rome to be surveyed with great accuracy.

Using laser scanning technology, they are creating accurate three-dimensional maps of these underground cities of the dead, which have served as the burial place of Christians, Jews and pagans from the 2nd century AD.

The team has trialled the technology within the largest of the city’s 40 catacombs, the multi-storey Saint Domitilla, which stretches for nine miles, though only the first third of a mile is open to the public. Using cameras that bounce millions of light pulses off every surface and record the results as a series of dots, the walls, floors and ceilings are being recorded in a way that it has never been seen before, producing images that resemble star maps or astronomical phenomena.

Beneath these large scale plans lies a huge amount of detail that can be analysed to allow the user to walk through a maze of virtual corridors and examine frescoes and wall paintings that date from the early-Christian era.

The leader of the project, Dr Norbert Zimmerman of the Vienna Academy of Sciences, said that laser scanning offered several advantages over video film: ‘The 3D flexibility gives you the chance to compare areas, to assess the ways the catacombs have developed over time, to analyse how and why those who built them did what they did,’ he said. •